When Intel (NASDAQ:INTC) launched its current-generation Bay Trail-T system-on-chip for tablets, it was a solid effort that finally made Intel competitive. As far as CPU performance and power consumption, the company did a stellar job, outdoing the very best from the ARM (NASDAQ:ARMH) camp and quite thoroughly busting the "myth" that X86 couldn't be implemented competitively in a mobile design. However, the chip did have a couple of Achilles' heels, and one of them just got addressed in a big way.

Bay Trail's graphics problem
It's no secret that tablets are content consumption devices. This typically means email, web-surfing, video playback, and so on. However, one major use for tablets is gaming. Indeed, according to a recent survey conducted by BuyVia, the top three use cases for tablets are the following:

While (1) and (2) depend largely on the general purpose processing capabilities of the chip (i.e., the "CPU"), (3) stresses the CPU and, more importantly, the graphics processing unit. Intel's Bay Trail-T actually had solid graphics performance (its predecessor, Clover Trail, had a laughably weak graphics processor) but was outdone by Qualcomm's (NASDAQ:QCOM) Snapdragon 800 and would likely fare poorly against anything implementing the latest ARM or Imagination Technologies (NASDAQOTH: IGNMF) GPU IP.

Bay Trail gets a speed-bump
While the Gen. 7 architecture used in the current Bay Trail-T is quite old and, frankly, not very competitive on a performance/watt and performance/area basis, the architectural deficiencies are masked by Intel's excellent 22-nanometer FinFET process. Bay Trail's graphics performance still trails that of a number of competitors (as shown below), but in the right devices at the right price points (i.e., mid-range and low-end), it can be competitive. 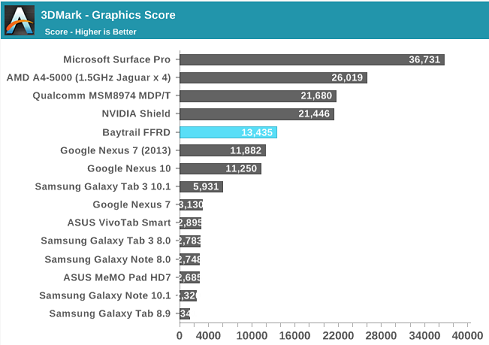 Now, the good news is that Intel appears to be launching a set of speed-bumped variants of Bay Trail (the Z37x5 series) that lift the GPU frequency by about 18% from 667MHz to 792MHz according to CPU-World. This isn't going to be enough to put Intel's new chips into the upper echelon of tablet graphics performance, but it is likely to help Intel win more designs, especially given the strong CPU performance and what is likely aggressive pricing.

Moorefield and Cherry Trail should hold the line until Broxton
While Bay Trail-T is likely to go into the mid-range Android tablets and across the stack on Windows tablets, during the second half of the year, Intel will introduce Moorefield, which is a smartphone-first, Android-only chip from Intel. It should have meaningfully better GPU performance (since it's based on Imagination's IP implemented in Intel's world-class 22-nanometer process) than even the speed-bumped Bay Trail-T while offering similar CPU performance, and it should do well in higher end Android tablets.

By the end of the year, Intel will also launch Cherry Trail-T for both Android and Windows tablets (for more details, read A Tale of Intel's Cherry Trail), which will offer significantly improved graphics performance. In addition to a significant increase in the number of execution units (from 4 in Bay Trail to 16 in Cherry Trail), the architecture will be entirely revamped, and it should offer best-in-class GPU performance, especially when implemented on the 14-nanometer process. Broxton, the successor to both Moorefield for phones and Cherry Trail-T for tablets, should put an end to the discussion (for more, read Will Intel Deliver on the Broxton Promise?).

Foolish bottom line
All in all, this is a quite welcome speed bump that should help improve Intel's competitive position in the mid-range, where it will be fighting the likes of MediaTek, Allwinner, and Rockchip. This isn't quite enough to take the leadership position from Qualcomm, nor will it be enough to fight NVIDIA's Tegra K1 (either 32-bit or 64-bit variants) at the high end, but it'll be enough performance to do well in the low-end and mid-range segments, where Intel is planning to fight tooth-and-nail for designs before the big guns show up in 2015.