Many investment banks, with Goldman Sachs among them, say that the bull phase of the commodity super-cycle is over.

Commodity super-cycles generally last 30 to 40 years. There is an initial 15 to 20 year phase where demand outstrips supply, and a later 15 year phase where supply outstrips demand. In the first phase of the current commodity cycle, many metal, energy, and agricultural commodities have doubled in price since 2000.

Over the past several years, however, prices have been, at best, range-bound. This has led to many market pundits declaring that the bull phase of the commodity super-cycle is over. So what's causing prices to stay range-bound, and are there any compelling reasons to own commodity producers?

China is key to the commodity super-cycle
For a decade and half, China was the factory of the world.

With its large rural population, the country had an almost unlimited supply of labor that kept wages low. Factories combined that cheap labor and foreign direct investment to make low-cost products that China exported all around the world. With that export income, China developed its infrastructure and industrialized.  Because labor and capital remained cheap, China's appetite for commodities grew to an unprecedented scale and led to one of the great commodity bull markets in history. 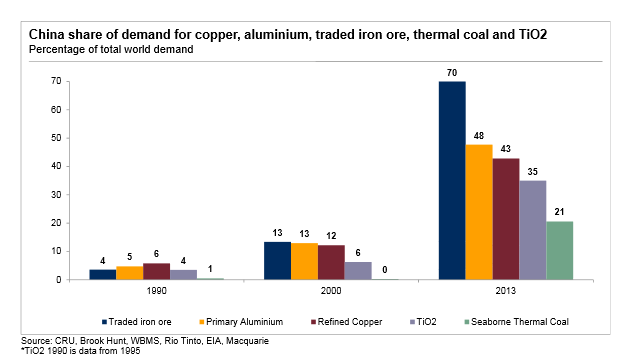 In recent years, however, the market dynamics have changed. Chinese labor wages have increased greatly. Chinese growth has slowed dramatically from a bursting credit bubble. The three proxies for Chinese economy -- rail cargo volume, electricity consumption, and bank lending -- are all weak.

Chinese demand for commodities, the underlying reason for the rise in prices, is no longer as strong as before, and the good times of double-digit annual price increases are over. The bull phase of the commodity super-cycle certainly looks over.

The bottom line
While the short-term picture doesn't look good, there are still good long-term reasons to own commodity producers.

Despite China's recent slowdown, long-term demand for commodities hasn't changed. There are many other emerging nations besides China that need to industrialize. Experts predict that 70 million people will enter the middle class every year. As more people enter the middle class, commodity demand will increase.

Besides getting exposure to emerging markets, owning quality commodity producers could also be a hedge against unanticipated inflation, which may occur because of the Federal Reserve's large balance sheet.

All three producers are profitable, well diversified companies that trade at reasonable valuations. The three are also reducing debt and controlling costs.