After laying an egg last year, the KFC brand hopes a makeover will have customers flocking to it once more.

After more than a year of tumult at its KFC chain in China, Yum! Brands ( YUM -1.92% ) announced it was bringing in Chinese celebrities to hawk an "unprecedented" overhaul of its menu to try to get sales back on track.

As one of the first fast-food restaurants to open shop in China 27 years ago, Yum! has grown to a network of more than 6,200 restaurants under its KFC, Pizza Hut, and local East Dawning and Little Sheep chains. KFC alone has nearly 4,600 restaurants in over 900 cities across the country. Its nearest competitor, McDonald's ( MCD -2.28% ), has less than half that number, and though it plans on opening another 300 stores there this year, Yum! is looking to open as many as 700 in 2014. As a result, Yum! is the largest fast-food chain with a 47% share of the market in 2012 compared to just under 15% for McDonald's.

Yum!'s well-documented troubles with food safety and quality led to a 13% drop in same-store sales in 2013 in China with a 4% decline in the fourth quarter. The KFC chain suffered a 15% and 4% decline in comps, respectively, showing it was the chicken joint that single-handedly pulled down performance, though McDonald's also suffered negative comps throughout the year suggesting the Chinese consumer may be questioning whether multinational brands offer the safety and quality they've touted.

Having given away the store at the end of the year with a limited-time promotion for a half-priced bucket of chicken, it helped skew KFC's numbers higher, and despite stumbling with complaints the buckets held different cuts of meat than the original, the chain is now hoping to build on its success with the revamp. In addition to new menu items, Yum! will also be gradually rolling out a new store design along with several digital initiatives including a new mobile app, e-menu, and prepay takeout option. 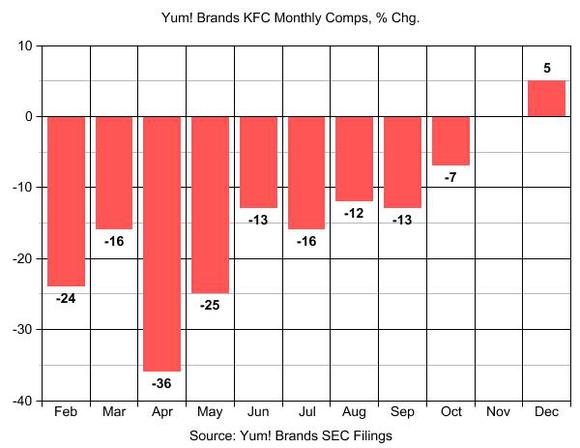 The investment comes as rivals also eye expanding their presence in China even as its economy begins to measurably slow, suggesting competition is going to get even tighter. Starbucks ( SBUX -0.98% ) opened 588 stores in China and the Asia-Pacific region last year, Dunkin Brands opened 790 Dunkin' Donuts stores last year and is planning on adding as many as 800 more this year, and Krispy Kreme recently signed an agreement to open 23 stores in China's southeastern province of Guangdong over the next five years.

Indeed, Starbucks, which plans to have 1,500 stores opened in China by 2015, says it and the Asia-Pacific region represents its fastest growing market, its highest margin region, and will soon become its biggest market behind the U.S. Sales in the region hit $267 million last quarter, up 25% year over year. For McDonald's, 20% of the stores it opened last year were in China, and while the country only accounts for 4% of its profits, that means it's a lower risk play on growth there than Yum.

In short, with more than half of its total revenues coming from China, it's imperative Yum! gets its KFC brand up and running once more and help turnaround its Pizza Hut chain as well. Just as the chicken shop perked up in December, its pizza shop headed south with comps dropping 3% from the year-ago period.

Yum! has cited both China and India for "their strategic importance and enormous growth potential," but business here at home is slacking and global economies are getting weak. Shares of the fast-food giant have slipped once again and I think we may not have seen the last of it as a slick makeover may not be enough to let diners forget why they flew the coop to begin with.