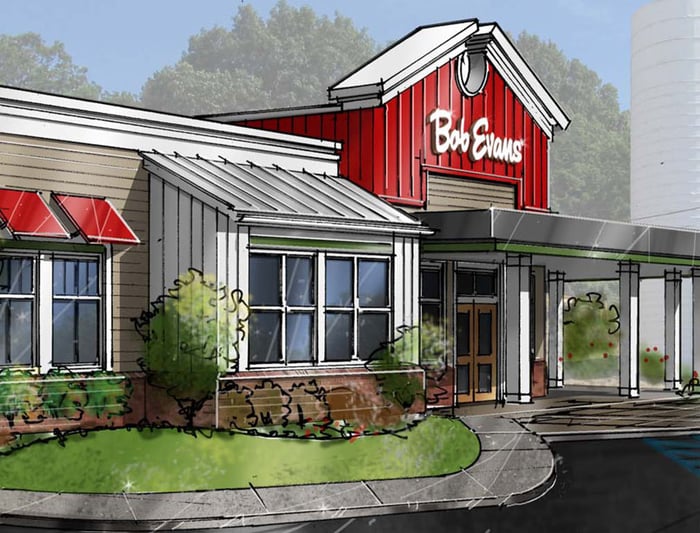 Bob Evans Farms (NASDAQ:BOBE) has given every excuse under the sun to explain its poor performance. Whether it's high sow prices blocking food profits, winter storms blocking guest visits, or remodeling expenses blocking cheaper overhead, Bob Evans Farms seems to have an explanation for everything. However, a closer look at some key numbers suggests the brand may actually be experiencing a quiet revival that's going unnoticed.

Bob's bitter cold results
On March 3, Bob Evans Farms reported fiscal third-quarter results for the quarter ended in January. Adjusted earnings dropped 51% to $7.8 million, or $0.30 per share. Systemwide same-store sales dropped 1.8%, but within those figures things went from bad to worse. In November, they rose by 0.4%. For December, they slipped 1.7%. January saw a 4.7% plunge, and February took a 6.7% nosedive.

The reasons for the bad performance, according to CEO Steve Davis, were

There seemed to be little room for optimism. But Davis added, "we expect these issues will be confined to fiscal 2014...and as such will not impact fiscal 2015 results." But is there evidence to back that up?

Turn to the Sunshine State
According to Bob Evans, February same-store sales experienced a weather-related impact of 9%. This means that same-store sales would have been up 2.3% instead of down 6.7%. This is quite a swing and puts a heavy amount of blame on the winter weather instead of anything to do with the brand.

In November, same-store sales for Bob Evans Florida popped 2.1%. For December, they jumped 6%. January saw a 5.7% leap, and February even inched up 1.2%. These numbers suggest the other regions have the potential to follow suit when the cold thaws.

Denny and Diney
Meanwhile, competitors such as Denny's (NASDAQ:DENN) and IHOP of DineEquity (NYSE:DIN) seem to lack those problems and appear to be eating Bob Evans Farms' lunch.

Bob Evans' Florida numbers are more in-line with what IHOP of DineEquity has reported of late. Last quarter, DineEquity reported that its IHOP chain had a 4.5% jump in same-store sales, which was even better than the 3.6% jump in the quarter just prior.  Going forward, DineEquity plans to simplify its menu and strengthen its social media advertising.  The company was vague on details, but CEO Julie Stewart said that DineEquity is "accelerating testing of key initiatives to more effectively compete and broaden IHOP's breakfast appeal."

Meanwhile, Denny's just expanded at the fastest pace in 12 years and is ready for more. Denny's same-store sales aren't growing as fast, but the chain still posted a decent 0.9% gain. It was the 10th positive same-store sales gain in the last 11 quarters.  Going forward Denny's launched this past January a line of breakfast sandwiches as well as a "limited time only" menu to entice diners to come in beyond the breakfast hours.

You may be wondering why Denny's and IHOP didn't seem to be affected by the weather as much as Bob Evans.  Although most likely the Midwestern and Northern locations were affected, both Denny's and IHOP have a high concentration of locations in California, Florida, and other southern warm areas that sway the overall averages. For Bob Evans, most of its non-Florida locations seem to be in winter storm areas.

Foolish final thoughts
Don't be surprised if the Street is "surprised" by fantastic results -- beginning with Bob Evans' fiscal first quarter. That quarter begins in late April. Look for comp growth once the weather finishes thawing. The pendulum swings both ways; Fools should look for a systemwide rebound in Bob Evans same-store sales and company profits.