Russia's recent actions in the Ukraine have put many on edge. It is important to recognize that in terms of oil America has little to fear. Russia could always constrict supply and cause a global oil shock, but this would only encourage more countries to diversify away from crude oil. A number of companies have rebooted America's oil industry, and they offer quite promising investments. 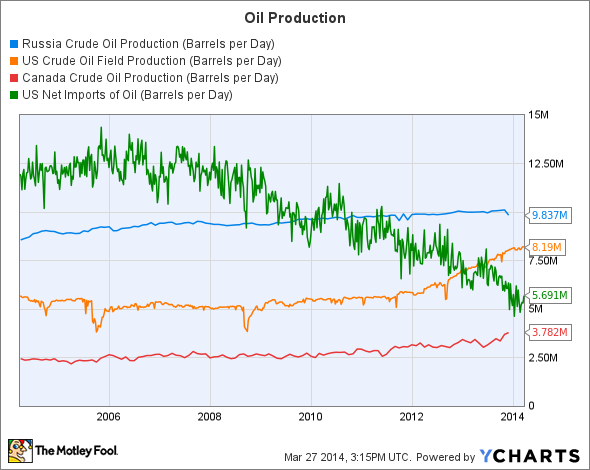 The above charts shows how U.S. oil imports have fallen significantly in the past couple years. In this time period the U.S. has grown its oil production significantly while Russia has only slightly increased production.

Russia wants U.S. help
For all of Russia's aggressive statements the reality is that it wants U.S. technology. ExxonMobil (NYSE:XOM) and Rosneft have signed a number of deals, including a joint venture to work together on oil fields in Western Siberia.

Western investors need to be careful
Getting caught in the middle of two warning nations is not a good idea. Still, big oil needs big projects, and ExxonMobil is not the first to accept Russia's political risks to replace falling legacy production. Chevron (NYSE:CVX) is involved in the Caspian Pipeline expansion. The pipeline is quite big, exporting 910 thousand barrels per day (mbpd) in February 2014.

In the former soviet republic of Kazakhstan ExxonMobil and Chevron have come together to work together on the complicated Tengiz field. Production challenges have made the field an expensive venture, but big oil needs to continue financing its development. Kazakhstan's close proximity to Russia means that it could easily reorient itself toward Moscow and sacrifice ExxonMobil and Chevron in the process.

Smaller can be better
ExxonMobil has big volumes to maintain. In 2013 it produced 4,175 mboepd while Chevron produced 2,597 mboepd in the same time frame. Chevron's smaller size allows it to be a nimble company that can grow quickly.

EOG Resources (NYSE:EOG) has played a big role in boosting U.S. production to supplement foreign crude. Its focus on shale plays like the Eagle Ford has given it strong production growth and margins. In 2013 EOG Resources produced 510 mboepd with the U.S. alone contributing 428 mboepd.

The Fool's bottom line
Russia and U.S. aggression is increasing and ExxonMobil and Chevron have little choice but to walk a fine line. In some ways mid-tier North American producers like EOG Resources and Apache are less risky because they can afford to focus on established high-margin plays in stable nations.