As investors, we always keep an eye out for new and disruptive business models. Fast casual restaurants are becoming more and more popular in the eyes of investors and consumers alike due to the disruptive business model they employ, especially when compared to traditional fast food restaurants. As you can see, shares of Chipotle Mexican Grill (NYSE:CMG) have handily outperformed those of fast food chains such as McDonald's (NYSE:MCD) and Wendy's (NASDAQ:WEN) over the last few years. 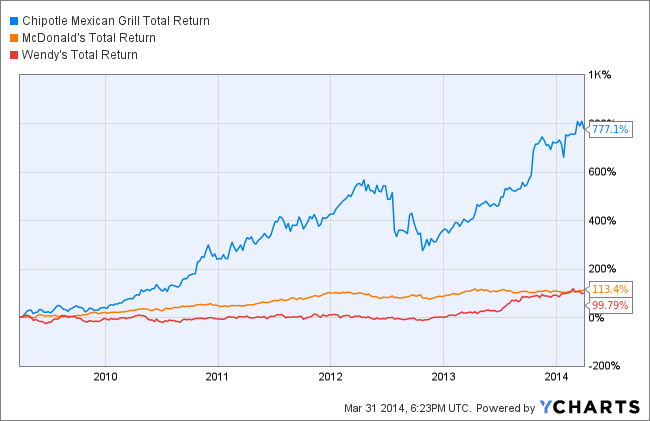 What can fast food chains learn from Chipotle and other fast casual diners?

Transparency is important
Claims of poor-quality, even unsanitary meals are continuous in fast food restaurants. Whether these claims are substantiated or not, they are still in the back of your mind when you visit such places.

Fast casual has fixed this issue, as food is typically served in front of the consumer. At Chipotle, a typical experience includes ordering and then watching your burrito every step of the way, from the steaming of the tortilla to the final roll of the burrito.

This type of service adds quite a bit of peace of mind to consumers compared with the ordering experience at McDonald's or Wendy's, where you wait two or three minutes and then get food that might not even be what you asked for.

Healthy, quality ingredients are key
For decades there has been a growing problem with obesity and related health issues in the United States. Even though consumers are free to eat what they would like to eat, fast food chains have been getting bombarded with scrutiny over the nutritional value of their offerings.

You can easily see what the problem is by looking at either Wendy's or McDonald's nutritional data online. A medium serving of fries, which is served with about every meal at these two restaurants, has around 400 calories by itself at both restaurants!

Chipotle serves chicken that looks like freshly cooked chicken, and steak that looks like freshly cooked steak, and there is a lot to be said for that when consumers have gotten used to other fast food offerings. Also, Chipotle offers plenty of healthy, nutrient-dense toppings, such as guacamole and salsa, rather than the fat-filled sauces served up at other restaurants.

And most importantly
The most important point to make about transparency and health is that consumers are willing to pay more for these amenities. A normal meal at Chipotle could easily cost 1.5 times the amount a meal of comparable size would at McDonald's or Wendy's, yet consumers are paying it.

It is unrealistic to assume McDonald's, Wendy's, and other fast food companies can retrofit their locations for consumer transparency, but there could be more progress in that direction in new store locations.

Fast food restaurants have made pushes in the health department. Wendy's offers many salads and other healthy sides emphasizing freshness. McDonald's has introduced similar offerings, as well as making calorie information available on their menus. These additions are nice for some consumers; however, most of the time when you visit McDonald's or Wendy's it is because you want something quick to eat. Wendy's or McDonald's is not the first place you think of when you think about going to grab a fresh salad.

Bottom line
The fast casual business model is quickly disrupting the fast food model , which has been virtually the same for decades and decades. Fast food is a slowing business as fast casual is rapidly growing. Investors should keep an eye on the older business models utilized by fast food companies to see if they can work toward a transformation that could help them reclaim the growth they experienced many years ago.

Big companies like McDonald's and Wendy's already have huge footprints in the United States and abroad. If they could mold their business models slightly to pick up on the growing trends consumers are becoming fond of, they could enjoy continued growth in the future.

Due to the fact that consumers appear willing to give up a couple extra dollars and a couple extra minutes of their days for high quality, made-to-order food, I believe we can expect Chipotle and other fast casual eateries to continue to take market share from traditional fast foods for many years to come.