Since these three stocks managed to break away from the pack last month, let's take a look at the key catalysts that drove shares higher and see whether they justify March's rally. 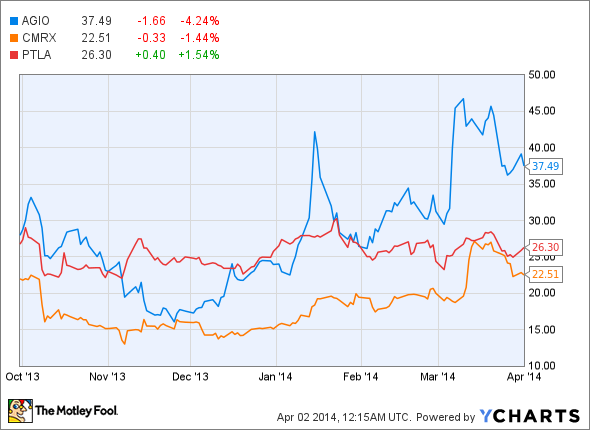 Fixing metabolic mutations
Agios Pharmaceuticals, an emerging company with ties to Celgene (NASDAQ:CELG), put up one of the most impressive moves in biotech last month. Shares jumped more than 25% in March following its fourth-quarter earnings conference call, but it wasn't the earnings that sparked investors' interest in owning the company's shares. After all, Agios posted just $6.7 million in revenue and lost $0.40 per share in the quarter.

Instead, it was enthusiasm surrounding an accelerated time line for Agios' pipeline of early-stage compounds. The two most advanced drugs in Agios' nascent program are AG-221 and AG-120. Those two drugs target a mutation to a metabolic enzyme that has been linked to leukemia and brain cancer.

In addition to AG-221 and AG-120, Agios also expects to move AG-348 into human trials this summer. AG-348 is a pre-clinical drug that hopes to correct for a mutation to an enzyme responsible for cell survival. That mutation can lead to PK deficiency, a rare disorder affecting infants that requires replacing the infant's entire blood system.

All those clinical trials mean that Agios' cash burn rate is about to jump. The company expects to end 2014 with $130 million in cash, down about $60 million from 2013. However, Agios does have an important and well-heeled partner in Celgene.

Celgene and Agios entered into a pact to discover and develop cancer therapies tied to metabolism mutations in 2010. As part of their agreement, Celgene handed Agios $130 million up front and took an equity stake in the company. Celgene handed Agios another $20 million in October to extend that deal for an additional year.

Tackling DNA Viruses
Chimerix, Inc. popped 14% in March after the company reported fourth quarter earnings and announced an accelerated phase 3 trial for its promising anti-viral compound brincidofovir. That accelerated program came following media pressure tied to a seven-year-old's inability to receive brincidofovir as part of a compassionate use program.

The need for new treatment options for children and adults with compromised immune systems that contract viruses following transplant is significant. As a result, Chimerix has already won the Food and Drug Administration's fast-track designation for brincidofovir as a treatment for cytomegalovirus, or CMV, in bone marrow transplant patients. That suggests that positive results from late-stage trials could result in a rapid approval ahead of Chimerix's previously anticipated target of 2016.

If brincidofovir is successful, the antiviral may have broader application beyond AdV and CMV given the drug has shown broad-spectrum antiviral activity against all five families of DNA virus including AdV, CMV, BK Virus, and herpes simplex viruses.

This week, Chimerix announced it's adding Lisa Ricciardi to its board of directors in a move that may signal Chimerix thinks brincidofovir will eventually win the FDA's go-ahead. Ricciardi's background includes serving on the board of a specialty pharmacy and holding former leadership roles at drug wholesaler Medco Health Solutions, which has since been acquired by Express Scripts.

Inhibiting the inhibitor
Portola Pharmaceuticals put up a very respectable 8% return in March thanks in part to the initiation of a phase 3 study of andexanet alpha, a factor Xa inhibitor antidote that is being developed under the FDA's accelerated approval program.

The potential for an antidote to factor Xa inhibitors, which seek to displace warfarin's decades long stranglehold on the anti-coagulant market, could prove a watershed moment for Johnson & Johnson, which already generates blockbuster revenue from its factor Xa inhibitor, Xarelto. It could also help spark sales of Bristol-Myers and Pfizer's Eliquis, a factor Xa inhibitor that hasn't yet reached a blockbuster run rate, but is growing quickly.

Currently, no antidote exists for these drugs. That means that while factor Xa inhibitors may offer a better safety profile than warfarin, doctors have limited options when bleeding does occur. Since drugmakers are heavily vested in overcoming that obstacle to using factor Xa inhibitors, they've pitched in development money to help Portola advance andexanet alpha through clinical trials.

Portola expects to release interim data from its phase 3 trial in the fourth quarter, with additional data coming early in 2015. But that's not the only trial data that could move shares higher. Portola also has phase 3 trials under way for its own factor Xa inhibitor, betrixaban.

Foolworthy final thoughts
All three of these biotechs may have outpaced the market and the biotechnology sector last month, but none has an approved product. That means all three remain speculative bets. Of the three, Chimerix and Portola are closest to putting candidates in front of the FDA for approval.

Since any number of things can happen in late-stage trials, investors should still approach these companies cautiously. However, if they do eventually win the FDA green light, it would seem a lack of competing therapies may offer a long runway for sales growth that could justify their current market caps. That suggests investors should keep a sharp eye on upcoming data.