There are cost-effective technologies and best management practices to capture methane from venting and leaks across the entire oil and natural gas value chain. These range from equipment upgrades or replacements, to process or operational changes. -- White House Climate Action Plan (opens PDF)

Natural gas production in the U.S. is expected to keep growing over the next decade, partly driven by increased demand for natural gas vehicles. However, new government regulations could lead to higher natural gas prices. For Clean Energy Fuels (NASDAQ:CLNE), Westport Innovations (NASDAQ:WPRT), and Quantum Fuel Systems Technologies (OTC:QTWWQ), increasing the cost of natural gas isn't a good thing. Could this be bad news for investors? Let's take a closer look.

All about the spread?
Today, natural gas is about $1 to $1.50 per gallon-diesel equivalent, or GDE, cheaper than diesel. Since the average Class 8 tractor-trailer burns more than 15,000 gallons of fuel per year -- meaning as much as $20,000 per year or more in fuel savings for a single truck -- cost will likely remain the main driver for adoption of natural gas for years to come.

Clean Energy Fuels and Westport have spent the past couple years spreading this message, and new engines featuring Westport Innovations technology are hitting the road. Westport's joint venture with Cummins has been shipping the 400 horsepower version of its ISX12 G engine for close to six months, and forecasts 2014 sales of 10,000 engines. With some 2,500 sold in 2013, the total number of trucks running this engine by 2015 could consume more than 180 million GDE of natural gas that year. For perspective, Clean Energy Fuels' total fuel sales in 2013 was not much larger than that; only 214 million GDE. There is simply massive potential for growth.

Stalling the momentum?
Most of the companies involved have indicated that much of 2014's adoption will likely happen later in the year, as fleets are still in testing. Both Clean Energy Fuels and Quantum Fuel Systems have made efforts over the past year to prepare for the adoption curve to ramp up.

Clean Energy has built more than 90 stations to support the adoption of trucks traveling along the primary shipping corridors in the U.S., with roughly 30 opened to date. As Clean Energy CEO Andrew Littlefair recently stated in an interview, 2014 is all about opening as many of the unopened locations as possible. Since March, at least four new stations have been opened, supported by commitments from fleet customers that will net at least 1 million GDE in annual  fuel sales.

We said Quantum's 2013 would be defined by production capacity expansion, and it was. During 2013, we nearly tripled our production capacity. It has required hard work, financial resources and a creative level of ingenuity to make it all work, and it has. Our capacity is growing. ... Quantum will carry forward into 2014 its focus on natural gas storage products and technologies and our overall systems and integration capability for natural gas vehicles.

On March 13, Quantum announced a $5.3 million order for its large-diameter Q-Lite tanks for Class 8 trucks. This is a significant order for Quantum, equal to almost 17% of the company's entire 2013 revenue. In a single order. The added capacity -- the company is projecting a total capacity of 20,000 tanks per year by September -- is massive. CFO Bradley Timon indicated that Quantum sold about 5,000 tanks in all of 2013. It's pretty clear that the company is anticipating huge growth going forward.

Westport is also counting on the second half of the year to drive its business as well. Management has stuck to its guns with projections that it will be EBITDA-positive in all of its business units by the end of 2014. Part of this is based on the accelerated demand of the ISX12 G, as well as direct sales of its iCEPACK LNG fuel system for Class 8 trucks. Additionally, the company's WiNG product for the Ford F-Series is expected to do well, as the F-150 -- a favorite among fleet operators -- will be available for conversion. If EPA regs push up fuel costs, it could slow adoption. 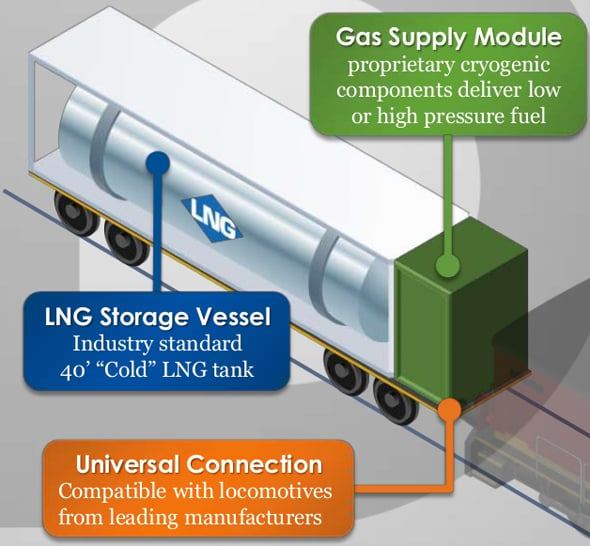 Westport's LNG tender will be based on an intermodal rail car, meaning easy swapping with a full unit to keep locomotives moving. Source: Westport.

Westport has the benefit of exposure to China through its Weichai Westport joint venture. This venture has actually grown to be larger than the Cummins JV, and as China's government makes serious efforts to cut pollution, expect growth to continue. Additionally, the company's off-road unit has a number of products that cater to the rail industry. Canadian National Railways is pursuing natural gas, and has ordered 4 LNG tenders --which can cost up to $1 million each -- from Westport.

Similarly, Clean Energy's IMW signed a $150 million deal in 2013 to supply China Gas with compressors and other parts for up to 300 CNG stations. Unless derailed by sanctions, a recent deal with Russian Machines Corp. could offer similar potential in Russia and Eastern Europe.

Final thoughts: better total emissions probably help more than regulations will cost
Natural gas producers have already done a solid job on emissions, which are actually lower than a decade ago. But the EPA has a responsibility to the public to determine if more should be done. Besides, the commodity cost of natural gas is actually a much smaller part of the "at the pump" price than most people think: Each $1 per MCF that natural gas goes up only raises the gallon-equivalent price about $0.12.

Additional regulations could strengthen the total emissions record of natural gas without adding much to the retail price. For Clean Energy, Westport Innovations, and Quantum Technologies, this probably will add value for their customers' sustainability initiatives and not really hurt the cost benefits. For me, the thesis remains largely intact.