Staples (NASDAQ:SPLS) shares were down nearly 26% in the first calendar quarter, partly due to announced plans to shutter 225 stores by next year. The company struggles to keep up with Amazon, even though Staples stays ahead of brick-and-mortar competitors such as Office Depot (NASDAQ:ODP).

The news made for easy comparison to RadioShack (NYSE: RSH), another retailer shuttering stores and dropping in share price. But Staples isn't the next RadioShack, or even as long-suffering as clothing retailers such as J.C. Penney (OTC:JCPN.Q) and Sears (NASDAQ:SHLDQ). So why will Staples shut down approximately 11% of its stores?

Fourth-quarter results for Staples included $5.9 billion in sales -- a nearly 11% drop from the prior year's quarter -- and $0.33 EPS. Analysts had estimated $6 billion in revenue and EPS of $0.39. Staples has now missed revenue estimates for five straight quarters. To help stem the losses, the company plans to initiate a $500 million cost-savings plan that includes the store closures.

Trimming brick-and-mortar
During 2012, Staples combined its retail and Staples.com segments to streamline reporting -- also known as making retail look slightly stronger by lumping in the online sales. The official website received an overhaul last year, the first major redesign since 2005, which further exemplifies the company's increasing dedication to online sales.

How good is Staples.com performing? In the recent fourth-quarter report, revenue for the combined retail and online segment was down 12%, year over year. Online revenue on its own was up more than 1%. So it's not that the online revenue is making massive gains; online is simply performing a lot better than the retail stores. And the costs of online sales are less than retail sales, since the former requires far less physical space and employees to maintain.

So Staples can close more than 200 underperforming stores in hopes that a portion of that traffic will divert to the website. And that's more likely to happen for Staples than with clothing-centric retailers such as J.C. Penney. Few people need to see printer paper or ink cartridges in person before purchasing.

But are the closings a sign that Staples' revenue has dropped to the level of RadioShack and other flailing retailers?

Steadier revenue growth than the competition
Here's a look at how Staples has stacked up to some other retailers in the past decade: 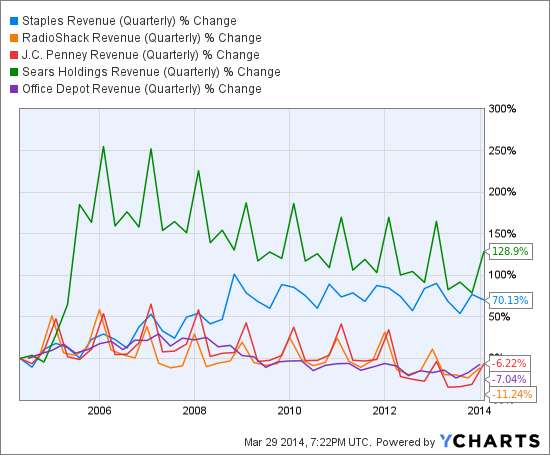 J.C. Penney, RadioShack, and Office Depot have problems because revenues have struggled for a decade. Sears' revenue was on a slow but steady decline over that period, while Staples' grew and then somewhat stabilized.

RadioShack has suffered from competition from Amazon and Best Buy. The electronics chain attempted to rebrand as a mobile phone showroom, but that proved too little, too late. The company simply doesn't have any products that consumers couldn't purchase online -- often at better prices -- and quick shipping services such as Amazon Prime mean that there's very little wait to receive the product.

J.C. Penney has had well-publicized issues that include an attempted turnaround that was aborted and reversed. The company joins Sears in not having enough brands that pull mall shoppers away from the myriad other options. Sears is also laden with the faltering Kmart chain.

So why was Staples able to hold steady in this landscape? The company offers generous discount programs to educators, who likely purchase more products than originally intended. And the company offers printing services that aren't available through Amazon.

Foolish final thoughts
Staples isn't going the way of the dodo. The chain has suffered in the recently weak retail climate, but not to the levels of competitor Office Depot or some clothing and home-goods retailers such as J.C. Penney. Closing underperforming stores should help Staples' metrics across the board without alienating too many customers.