Baskin-Robbins must contend with other ice cream stores, such as Cold Stone Creamery. Cold Stone Creamery offers differentiation thanks to its presentation (preparing ice cream on marble slab) and because of the inclusion of snacks and candies within the ice cream, not on top of it.

While Cold Stone Creamery as well as many other ice cream shops present a threat to Baskin-Robbins in the United States, this is no longer the biggest threat. That title would belong to recent consumer demand for frozen yogurt and gelato.  But Baskin-Robbins has an ace up its sleeve to combat this threat, which we'll get too soon. Most importantly, Baskin-Robbins has significant growth potential abroad.

Domestic growth
Due to current headwinds -- primarily changing consumer trends -- you might not expect Baskin-Robbins to be performing well in the United States. Though not overly impressive Baskin-Robbins delivered a 0.8% in the United States in 2013. The primary reasons for the positive comps number as stated on the company's 10-k: "new product news and signature Flavors of the Month, custom cake sales, and take-home ice cream quarts"

Dunkin' Brands also slightly increased its domestic Baskin-Robbins store count to 2,467 in 2013 from 2,463 in 2012. Increased store counts often indicate that upper management is confident in the brand's future prospects.

The above numbers and news aren't necessarily reason for celebration. However, they are reason not to panic. Baskin-Robbins offers more growth potential on the international scene.

International growth
Baskin-Robbins delivered a more impressive 1.9% comps gain in 2013. The primary growth catalysts: increased demand in South Korea and the Middle East. Japan hurt Baskin-Robbins in 2013, but this was due to an unfavorable foreign curreny impact, not reduced demand. It should also be noted that an Basin-Robbins has increased distribution costs billed to customers.

Most importantly, international demand for American brands is high, and most international consumers outside or Europe aren't as health-conscious as Americans. Therefore, this headwind won't be a big factor at any point in the near future. Furthermore, Baskin-Robbins increased its international store count to 4,833 in 2013 from 4,556 in 2012. This signifies a lot of optimism.

All of this is impressive. But to invest in Baskin-Robbins, you must invest in Dunkin' Brands. Therefore, let's see how efficient Dunkin' Brands is compared to its peers.

Efficient or not?
One of the best ways to determine a company's efficiency is to see if its revenue is outpacing its selling, general, and administrative expenses. Fortunately, this is the case for Dunkin' Brands: 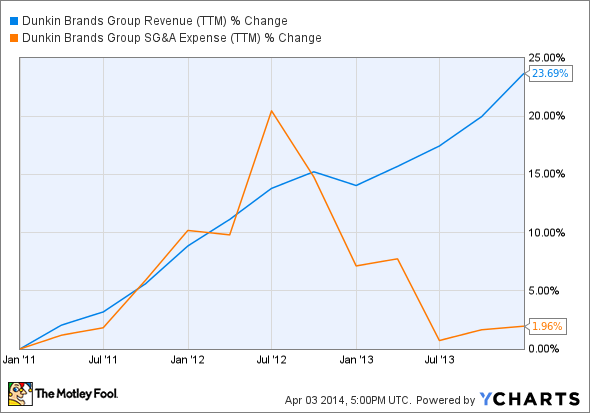 However, Dunkin' Brands hasn't been growing as quickly as Tim Hortons (NYSE:THI.DL) on the top line over the past five years. Tim Hortons has also managed to grow its revenue faster than its SG&A expenses: 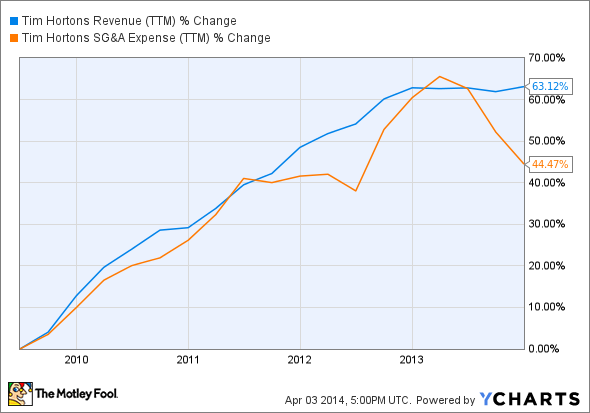 Additionally, Dunkin' Brands delivered fiscal-year 2013 comps growth in its Dunkin' Donuts U.S., Baskin-Robbins U.S., and Baskin-Robbins international segments of 3.4%, 0.8%, and 1.9%, respectively. The only segment that suffered a comps decline was Dunkin' Donuts international (0.4%). Tim Hortons delivered fiscal-year 2013 comps growth of 1.1% in its Canadian segment and 1.8% in its U.S. business. Though decent, not as impressive as Dunkin' Brands overall.

Now let's examine the biggest competitor for Dunkin' Brands -- none other than Starbucks (NASDAQ:SBUX). As you can see from the chart below, Starbucks doesn't have as much separation between revenue performance and SG&A expense growth, but it's by far the most consistent: 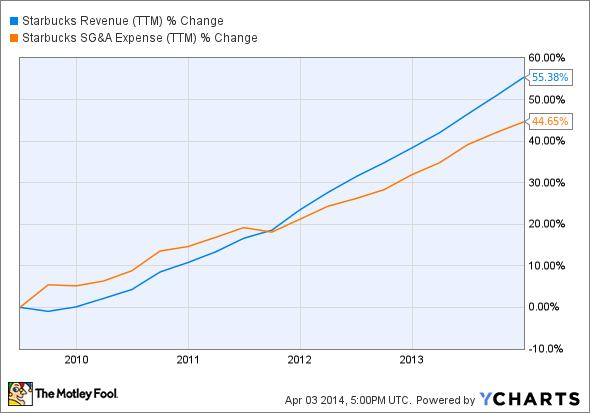 The Foolish bottom line
Baskin-Robbins is far from a dead brand. In addition to significant international growth potential, it will be entering the Greek yogurt market in the U.S. soon. Internationally, if Baskin-Robbins increases its store count where demand is high, then there should be prosperous times ahead. This is combined with Dunkin' Donuts U.S. operations seeing similar growth opportunities.