In the high growth biotechnology industry, up-and-coming companies pump profit back into R&D rather than into investor wallets. That means there are few investment options for dividend investors hoping to gain exposure to the industry.

So, dividend investors often turn to large pharmaceutical and medical device companies instead. But those companies are an imperfect way to gain biotech exposure given their diversified business models and exposure to patent expiration. Additionally, a rally in dividend stocks has pushed yields in these health care stocks to anemic levels over the past couple years.

As a result, dividend investors may be better served getting their biotech exposure by turning to health care real estate investment companies, or REITs, like BioMed Realty (NYSE: BMR).

BioMed makes its money as a life sciences landlord, acquiring high-demand properties in research hotbeds like Cambridge, Massachusetts. Demand for this type of specialty space is on the rise thanks to surging R&D activity, offering significant support to BioMed's already enticing 4.9% dividend yield. 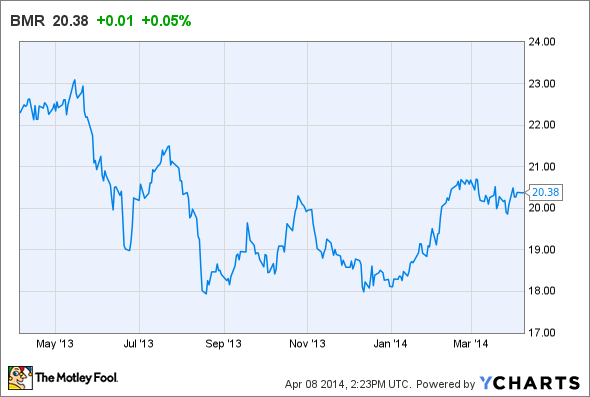 Piping hot demand
Boston is the nerve center for the life sciences industry, with Cambridge housing some of the biggest biotech outfits, including Biogen and Roche's Genzyme, as well as some of the most promising emerging biotech companies, including six members of the biotech IPO class of 2013.

Thanks to willing equity markets, venture capitalists, and large drug developers eager to reinvent the R&D cycle, these young biotech companies are enjoying a wave of financing that's spawning a land rush for Cambridge real estate. In turn, that demand is boosting occupancy and rents -- promising news for BioMed given more than a third of its life sciences real estate is in the Boston market. In the first quarter, commercial vacancy rates in the Greater Boston area fell to 13.4% in the fourth quarter, marking a five-year low. That handily outpaced the national average vacancy rate of 16.8%, according to real estate research firm REIS.

While demand in the Greater Boston region is impressive, it doesn't come close to reflecting how strong real estate markets are in the biotech-heavy Cambridge market. Cambridge's 5.7% commercial vacancy rate in the fourth quarter was the lowest since 2001. For comparison, that rate was 6.5% last fall. That jump in occupancy helped drive prices for Class A space in Cambridge up 7% to $57.85 per square foot last quarter, according to Cassidy Turley.

Although the Cambridge market accounts for more than a third of BioMed's footprint, Boston isn't the only area the company serves.

And while early and emerging life sciences companies are taking up a lot of vacant space -- its properties were 91.4% leased exiting Q4 -- BioMed has a stable of large, well-heeled tenants providing it with solid cash flow. More than three quarters of its tenants are at least mid-stage companies, and that suggests that even if many of these young start-ups fail, BioMed is still well-positioned. Translating demand into profit
BioMed's rental revenue hit a record $118 million in the fourth quarter, driving net operating income up 6.1% year over year. As a result, core funds from operations reached $1.49 in 2013, up from $1.31 in 2012. That growth came in part thanks to expanding relationships with biotechnology companies launching top-selling new drugs, including Regeneron, the company that sells the blockbuster vision drug Eylea and is working on a transformative cholesterol fighting compound with its partner Sanofi.

That strong financial performance is likely to continue thanks to another 694,000 square feet currently under development, of which roughly 69% has already been leased. Combine that in-process development with currently vacant space and rent growth, and you have a recipe for additional shareholder friendly dividends. In the fourth quarter, for example, the dividend payout grew 6.4% to $0.25 per share. That brought BioMed's dividend payout to $0.95 per share last year, up 8.5% from 2012.

Since BioMed's tenants require sophisticated space that isn't easily duplicated, it doesn't compete directly with many other commercial REITs. However, it does face off against Alexandria Real Estate (NYSE:ARE), and to a lesser extent with the larger, more diversified HCP (NYSE:PEAK).

Alexandria is a larger life sciences landlord, boasting a footprint of 17.5 million rentable square feet. Alexandria has another 13.4 million worth of square feet in development and similarly benefits from the same industry trends supporting BioMed.

As a result, Alexandria boosted its dividend 17% year over year to $0.70 for the first quarter of this year thanks to occupancy growing by nearly four percentage points last year, to 96%. That translates into a forward annual dividend yield of 3.9%.

In addition to serving life sciences tenants, HCP's tenants cut across the broader health care sector. Of its $21.8 billion in assets, only about 16% targets the life sciences industry, while two-thirds target senior housing or skilled nursing. Those markets have also been strong performers, helping lift HCP's funds from operations by 8% to $2.95 last year. That resulted in HCP upping its dividend 3.8% last year, its 29th straight annual increase, giving it a forward dividend yield of 5.5%. 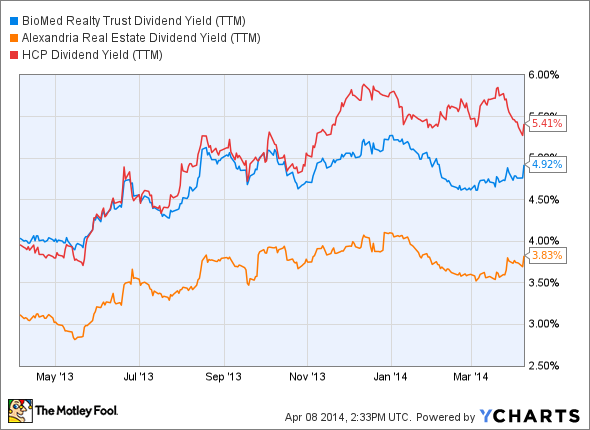 Fool-worthy final thoughts
While BioMed's forward annual dividend yield is attractive at just shy of 5%, owning the company's shares does come with risk. Funding for research will need to stay friendly if demand for such rentable space is going to remain high. Also, since these buildings are specially built and located in expensive real estate markets, funding costs can present headwinds.

After all, REITs are heavily indebted, and that can weigh down profitability during periods of peak interest rates. It's likely we're still a long time from hitting those peak rates, but it's certainly something investors should be aware of given future financing may not come at nearly as favorable terms as it's been coming since the recession.