Eylea, a drug for age-related macular degeneration, has been a tremendous success for Regeneron (REGN -0.73%). The drug exited 2013 at a blistering $2 billion annualized rate of sales, and that performance is a big reason Regeneron's (NASDAQ: REGN) share price has soared over the past two years. However, if Regeneron (NASDAQ: REGN) is going to keep rewarding investors with better-than-market returns, it's going to need its pipeline to deliver another winner. That means the stakes are high for Regeneron's alirocumab, a phase 3 cholesterol-fighting drug that the company is co-developing with Sanofi (SNY 0.72%). 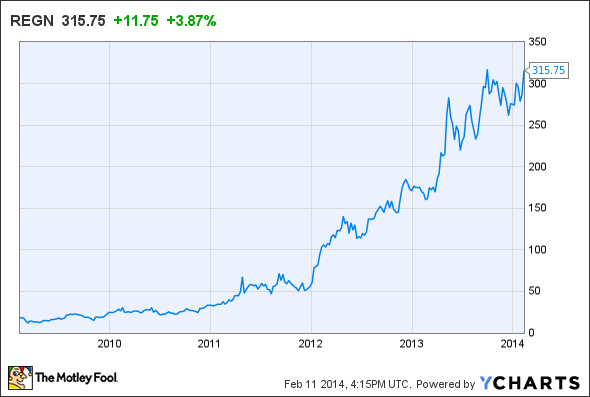 During phase 3 trials, alirocumab outperformed Merck's (MRK 0.36%) blockbuster drug Zetia in lowering bad cholesterol. Patients treated with alirocumab every two weeks saw a mean reduction in LDL of 47% over six months, while those treated with Zetia saw a mean 16% reduction. In an earlier phase 2 study, combining alirocumab with statins, the standard of care for lowering cholesterol, reduced LDL by 70%. Those are impressive results and could bode well for future sales, since Zetia is the 28th best-selling drug in the U.S., producing sales of nearly $450 million during the fourth quarter.

Success in these trials prompted Regeneron (NASDAQ: REGN) to initiate two more alirocumab phase 3 trials, Odyssey Choice 1 and Choice 2, in the past few months to see if the drug can be equally effective when dosed every four weeks. If successful, the longer period between injections may appeal to doctors worried over infusion-related risks of infection.

Regardless, the fact that Regeneron (NASDAQ: REGN) and Sanofi (NYSE: SNY) are conducting a dozen late-stage trials across more than 23,000 patients means there may be a treasure trove of data available to persuade doctors to prescribe alirocumab as a stand-alone or adjunct therapy to statins.

Racing toward approval
The excitement surrounding alirocumab's potential comes from its novel approach. The drug works by blocking the activity of PCSK9, an enzyme that helps regulate cholesterol levels. Since too much of the PCSK9 enzyme means LDL metabolism will fall, slowing PCSK9 activity can help the body eliminate bad cholesterol more quickly. That's a different approach from statins, which seek to slow cholesterol production in the liver.

However, Regeneron (NASDAQ: REGN) and Sanofi (NYSE: SNY) aren't the only ones working on a therapy targeting PCSK9. Amgen (AMGN -0.22%) is virtually neck and neck with the two thanks to AMG-145. In phase 2 trials, Amgen's (NASDAQ: AMGN) drug reduced LDL by 40% to 59% in patients versus placebo. While Amgen (NASDAQ: AMGN) hasn't released the full data from its phase 3 trials, the company did report that AMG-145 met its primary endpoints of lowering LDL at week 12 and lowering average cholesterol at week 10 and 12.

Pfizer (PFE -0.16%) also has an ongoing phase 3 trial studying its PCSK9-inhibiting drug, RN316. Pfizer (NYSE: PFE) has designed the study to focus on the hardest-to-treat patients and hopes phase 2b results will help differentiate it from Regeneron (NASDAQ: REGN) and Amgen's (NASDAQ: AMGN) option when they're reported in March at the American College of Cardiology Meeting.

There's plenty of opportunity at stake for the three companies, considering that statins' widespread adoption last decade pushed category sales north of $20 billion at their peak. Since the PCSK9 inhibitors are a new class of injected specialty drugs, it stands that their pricing and total market value of their sales could far exceed those levels if doctors widely embrace them.

According to the American Heart Association, spending on cardiovascular treatments will triple between 2010 and 2030 as a larger, longer-living population pushes the percentage of Americans affected by the disease to 40%. If those projections prove true, it means some $800 billion may be spent during that 20-year period.

If You Invested $10,000 in Regeneron Pharmaceuticals 5 Years Ago, This Is How Much You Would Have Today
351%