Shareholders in direct-seller Nu Skin Enterprises (NYSE:NUS) have been enjoying a wealth-enhancing ride over the past few years, as the company's sales and stock price have followed rapid upward trajectories. Unfortunately for them, that ride hit a major speed bump in mid-January after China's Administration for Industry and Commerce announced an investigation into the company's business practices. While the investigation closed with relatively minimal punishment for Nu Skin and this led to a muted relief rally, the shares remain significantly below their pre-investigation level and they trade at a below-market P/E multiple of around 14. So is Nu Skin a good bet at current prices? 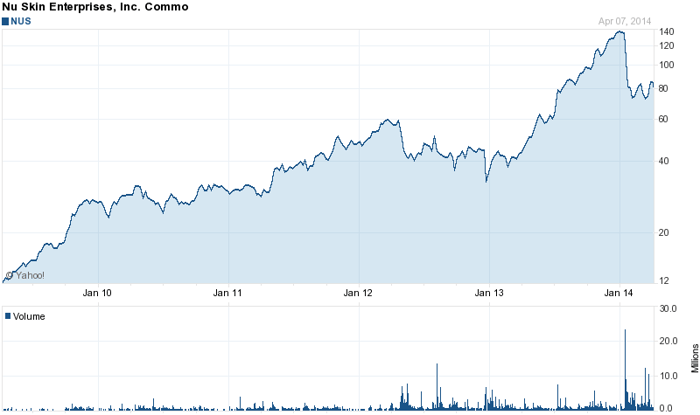 What's the value?
Nu Skin has been riding a global wave of interest in health and wellness products. This area accounts for roughly half of its sales, undoubtably aided by an obesity epidemic that is prodding people of all ages into lifestyle and diet changes. The company has also anecdotally benefited from the aging and increasingly affluent populations of certain developing countries, notably China. This has helped pump up sales of its skin care products, including those of its fast-growing ageLOC brand. While the direct-selling model has its share of critics, the model has proven to be an effective method of hawking health and wellness products and this has led to a generally solid growth trajectory for Nu Skin over the past 20 years.

In its latest fiscal year, Nu Skin continued to post strong results, highlighted by a 49% top-line gain that stemmed from solid sales volume growth and a sizable increase in its global independent sales force. More important, the company's profitability registered an even larger year-over-year gain thanks to greater per-representative productivity and scale efficiencies in its manufacturing supply chain, as evidenced by a five-year high in its gross margin. As a net result, Nu Skin recorded a sharp pickup in operating cash flow, which provided funds for more new product development, the lifeblood of a direct-selling enterprise.

With whatever means necessary
Of course, investors need to be cognizant of the downside risks associated with the direct-selling industry, as its critics seem willing to go to extraordinary lengths to make their points. While criticism of Nu Skin's operating model has been relatively benign, competitor Herbalife (NYSE:HLF) hasn't been so lucky. Herbalife has been forced to engage in virtually hand-to-hand combat over the past year with hedge fund Pershing Square, as its founder is convinced that he smells a pyramid scheme. As reported by The New York Times back in March, Pershing Square has more recently looked for assistance from the political establishment in Washington. This effort seems like it has paid off with the recent launch of an investigation by the Federal Trade Commission.

Despite the publicity distractions, Herbalife posted solid results for fiscal 2013, highlighted by an 18.5% gain in its top line that drew aid from an increase in the size and productivity of its independent sales force. Like Nu Skin, Herbalife benefited from a larger presence in China, where the company generated double-digit growth due to the procurement of additional direct-selling licenses and successful physical store expansion beyond high-profile urban markets. On the downside, though, Herbalife's profitability was clipped by a rise in its corporate overhead that partially resulted from higher professional and legal costs that it needed to protect itself from its myriad of detractors.

A better way to go
Naturally, the direct-selling industry also has its supporters. Most notably, these include iconic investor Carl Icahn, who has built a large position in Herbalife, complete with a growing number of board seats. However, the cloud over the industry's business practices seems likely to keep valuations at a below-market level. As such, investors looking for a health-and-wellness play would probably find better returns with a more traditional marketer like GNC Holdings (NYSE:GNC).

The king of the specialty retail nutrition business remains a growth story, as it reported an 8.2% top-line gain in its latest fiscal year, thanks primarily to an expanding roster of stores around the globe. While the company isn't a multilevel marketing organization, it does have a growing "direct-selling" presence via its online operations, which continued to expand at a double-digit pace during the period. GNC also continued to benefit from its partnerships with general merchandise retailers such as drugstore giant Rite Aid, which have helped to expand GNC's brand at minimal cost and allowed it to post an adjusted operating margin that hit a five-year high in fiscal 2013.

The bottom line
While China closed its investigation into Nu Skin's business practices, the collateral damage seems unlikely to be swept away so easily. This is shown by the failure of Nu Skin's stock price to rebound to anywhere near the pre-investigation price level.  As such, prudent investors should probably watch the action in this volatile story from the sidelines.