The secret of smart investing is often as simple as answering two basic questions: Is a stock a good bargain, and can it create long-term value. Let's use this approach to find out how the U.S. aircraft major, Boeing (NYSE:BA), stacks up as an investment option.

Boeing's stock price nearly doubled in 2013 as investors got excited about the revival in the commercial aircraft sector and the company's big order wins. Now's a good time to see if there's any steam left in the company's stock.

To ascertain if Boeing is a good value for the money, we'll look at its earnings yield. We get this number by dividing the company's annual earnings per share with its current share price, a simple inversion of the P/E ratio. The earnings are either paid out as dividends to shareholders or funneled back in to the company to earn higher future returns. 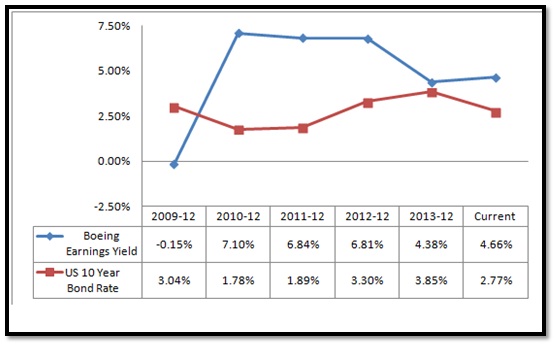 As evident, Boeing clears the test -- there's currently a neat spread of 1.89 percentage points between the company's earnings yield and the 10-year-bond rate. Its valuation gets even more attractive when considering its higher earnings potential.

The aircraft major has embarked on a "partnering for success" program with its suppliers, which asks for big concessions in return for future volume opportunities. Doug Alder, a company spokesman, told Bloomberg that the effort has "generated several billion dollars in committed savings across the Boeing enterprise." The company is also trying to manufacture planes more efficiently.

Both initiatives could mean higher future earnings. Simply put, if the company can continue to grow earnings at the level of past growth rates, an initial investment will yield a higher rate of return and further outpace treasury yields. Boeing has a good track record, too; in 2013, earnings improved by more than 16.6% over the year-ago period to $5.97 per share.

Return on invested capital
Boeing's stock can yield sufficient returns to justify an investment, but is that enough? In his New York Times best-seller, "The Little Book that Still Beats the Market," Joel Greenblatt says that "beyond price, we might also want to know something about the nature of the business itself. In short, are we buying a good business or a bad business?"

To answer this, let's evaluate Boeing's return on invested capital, or ROIC. Fools have always been big fans of this ratio, which often doesn't get as much credit as it deserves. A Foolish report on fundamentals defines ROIC as "the cash rate of return on capital that a company has invested. It's the true metric to measure the cash-on-cash yield of a company, and how effectively it allocates capital."

Now to compare Boeing's ROIC with its weighted average cost of capital, or WACC, which, as the name suggests, represents the cost that Boeing has to incur for its capital. Simply put, WACC averages the cost of debt and the cost of equity. Boeing creates value when its ends justify the means, or when its ROIC exceeds its WACC. Let's see what the two look like in the following chart: 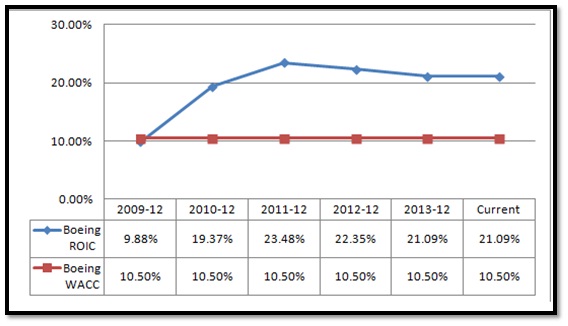 Boeing's ROIC from Morningstar; its WACC has been calculated by thatswacc.com

The airplane maker is a reliable value creator, and it is picking its business opportunities well. The company had more than $2 billion in capex in 2013, and will spend more this year to expand its business. This could enhance shareholder returns in the long run.

Sustainability
Boeing's looking good, but before the final verdict, let's find out about the aircraft major's business sustainability and its moat. In terms of market potential, Boeing forecasts a steady growth rate of 5% annually through 2032, while European airplane major Airbus (OTC:EADSY) expects a 4.7% rate. The former expects market demand to be for more than 35,000 aircraft by 2032; the latter, just above 29,000.

Boeing and Airbus practically hold a duopoly in the global commercial aircraft market, and each has its niche nicely carved. As shown in the charts below, the former leads in wide-body jets while the latter delivers more narrow-body planes.

Narrow-body and wide-body deliveries by Boeing and Airbus. Data by Bloomberg Finance

Regional players like the Brazilian Embraer (NYSE:ERJ) or Canadian Bombardier are no match. In 2013, Boeing delivered 648 commercial planes, Airbus 623, and Embraer 90. The chart below shows the trends. 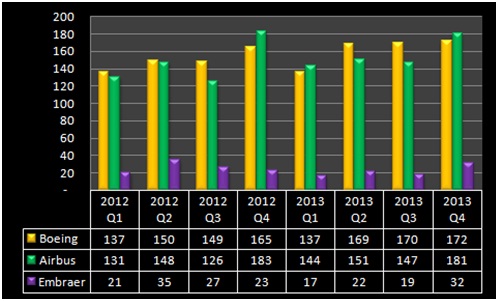 Risk
On a cautious note, it's good to remember that since more orders are flowing in from emerging economies, there's a risk of order cancellations if demand slows down in these regions. Boeing has an astounding $374 billion in commercial backlog, but a good proportion of it comes from Asia, Middle East, Latin America, and Africa. 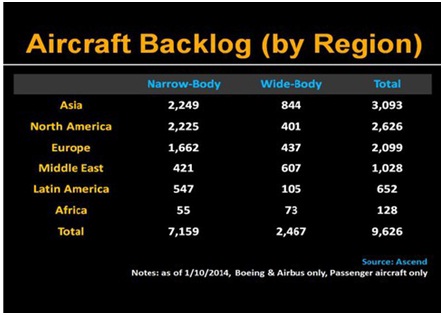 Cyclicality is another factor that can stall Boeing's prospects. Currently, the commercial aviation market is in an expansion phase, and Boeing CEO Jim McNerney told analysts in the January earnings call that "it feels like at least a book-to-bill of 1-to-1 coming up this year." If the industry trends reverse in the next five years or so, and the book-to-bill ratio shrinks to less than one with a drop in backlogs level, then Boeing could find it difficult to sustain its current growth and profitability.

Final take
Risks remain, but based on the above evaluation, Boeing appears to be a good investment option. The company passes two crucial tests, which reflect its ability to yield good returns for its shareholders and to allocate capital to good business opportunities.