Back in summer 2011, Netflix (NASDAQ:NFLX) shares were pushing $300, and I stayed as far away from the stock as possible. Don't get me wrong -- I love the company. I've been a subscriber for years, and the streaming service became a favorite in my home soon after it was launched. However, I thought the company was wildly overvalued. Even as it fell to $200, I viewed Netflix stock as pricey for what it delivered.

Original content is part of what makes Netflix a great growth stock even today.

Then came "Qwikstergate." As the company prepared to split the service into separate parts for DVDs and streaming -- including what would be two different websites, queues, and bills -- and to nearly double the price for some customers, Netflix suffered its first quarter of declining subscriptions in years. By October, shares were in the $70s, and I was a buyer. Of course, they'd fall even further -- approaching $50 during summer 2012 -- but the return of growth, Carl Icahn taking a big stake, and even rumors of an acquisition all helped the stock bounce back strongly. The question now is whether Netflix is a good place to invest as its competition grows stronger, including Amazon.com (NASDAQ:AMZN) expanding further into content delivery with the new Fire TV set-top box and rumors that the e-commerce king will begin adding new features to its Prime service after increasing the annual fee by 25%.

Shares are now around $350, a substantial fall from the recent all-time high of $458. Is this a good time to buy? 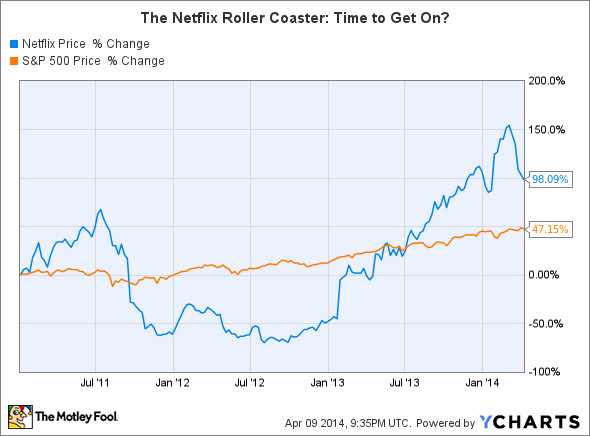 Best CEO or worst CEO?
Investing in Netflix has to be at least partly based on leadership. Founder and CEO Reed Hastings was lambasted by the financial media over the Qwikster debacle, named worst CEO by many in 2011. Frankly, in many ways he earned the title, considering that the share price fell from $300 to $65 in less than six months. However, the speed with which the company reversed course from Qwikster, while sticking to its guns on increasing the price for the real value that the two separate services provided, reflects well on the entire management team.

So here we are, a couple of years removed, and Hastings is considered a darling among CEOs, even rumored at one point to be in the running for the top job at Microsoft. The reality is, Hastings and his team don't manage the business to the stock price, instead focusing on what matters: providing great content to subscribers at a price that is a value to the consumer and profitable to the company. At the end of the day, this is what will create long-term shareholder value. Considering that Hastings holds almost 1 million shares, it's probably fair to assume that he's vested in the long-term success of the company.

Competition from a big partner?
Netflix and Amazon are actually partners, with Amazon hosting much of Netflix's content on Amazon Web Services. Amazon actually features Netflix as a case study for AWS. However, the two compete head-to-head for streaming content, with Amazon Prime providing -- in addition to two-day free shipping -- thousands of movies and TV shows for streaming, all for $99 per year. Amazon's new Fire TV box will feature Netflix; the company's marketing actually gives Netflix the first mention, and the Netflix logo is the first one shown:

Nonetheless, Amazon's business is reliant on growing its digital distribution.

But it's about paid content
My thesis for Amazon's digital content has long been that Prime is less about offering free content, and more about creating a beachhead strategy in order to sell premium content. My own personal experience is proof of that, if anecdotal. My family initially subscribed to Prime for the shipping benefit. However, we cut the cable cord more than two years ago. Over that time, Amazon Instant Video has become a mainstay in my house, almost as much as Netflix. The difference?

We are paying for content we don't want to wait to show up on Netflix.

We are huge fans of The Walking Dead, which we started watching on Netflix. But as soon as my family finished season 2, we couldn't wait for the next season to come out on Netflix, so for about $2 per episode -- or $8 per month for the few months that the season was on TV -- we watched the new season on Amazon. We've done that for the past two seasons, and with a few other TV shows as well. But Netflix is still our primary "channel."

Simply put, Netflix just has more of the content we are looking for than Amazon Prime, and does a better job of recommending new things to us. But considering that we get more programming than we could possibly want for less than $17 per month combined -- plus that free shipping -- bundling the two is a fantastic deal for us, and apparently for millions more people who are leaving cable and moving to a streaming lifestyle.

Final thoughts: It's still about the growth story
As the Fool's Jim Mueller points out in this article, Netflix is still growing like crazy. Domestic subscribers are increasing at more than 20%, and international growth -- the real long-term opportunity  -- an astounding 78%. Neither Netflix nor Amazon look good using the typical valuation measures, but both companies are really good at generating a ton of cash. For now, they are both pouring it back into the business to fuel growth.

Even After Falling $100 per Share, Is Netflix a Buy? @themotleyfool #stocks $NFLX $AMZN Next Article
Current