The mobile gaming market is a hit-or-miss industry and this volatility has taken its toll on many game-developing companies over the past few years. Companies like Zynga (NASDAQ:ZNGA) and Glu Mobile (NASDAQ:GLUU) have fallen prey to this uncertainty due to their inability to consistently create attractive games. Consequently, stocks of both companies have consistently tumbled since they went public.

However, it seems like this trend is changing as both Zynga and Glu have appreciated considerably in the last few months. But will the companies be able to sustain this run in 2014? Let's find out.

Glu Mobile's run-up in the stock price has come solely because of the company's stellar quarterly results. Glu delivered record quarterly revenue of $42.8 million, up 62% year over year, while adjusted EBITDA came in at $6 million. The company thrashed Wall Street estimates and even revised its top- and bottom-line guidance upward. Although Glu's shares have shot up nearly 18% in 2014, it still has more upside potential.

The flavors of the mobile gaming market change habitually as gamers tend to get bored within a few months of playing any game (you don't play Angry Birds anymore, do you?). Therefore, it's important for any company to either constantly come up with chart-topping games or make regular updates to prolong the popularity of existing games. The latter seems to be easier to execute and that is exactly what Glu Mobile is doing.

Glu's success was largely driven by the success of its Deer Hunter 2014 title, so the company will be making content updates in the coming quarters to ensure that gamers don't lose interest. In addition, it will also launch the sequels of its famous Frontline Commando and Contract Killer franchises.

Also, Apple's (NASDAQ:AAPL) contract with China Mobile is a likely tailwind for Glu as Apple's App Store contributed close to 64% to Glu Mobile's revenue. Analysts predict that Apple will sell an additional 20 million phones in China in 2014, and this can boost Glu Mobile's sales as well. In addition, China's smart devices gaming industry is growing at a rapid pace. The nation's mobile games market jumped over 370% year-over-year in 2013 to nearly $2 billion and is expected to grow another 94% in 2014. 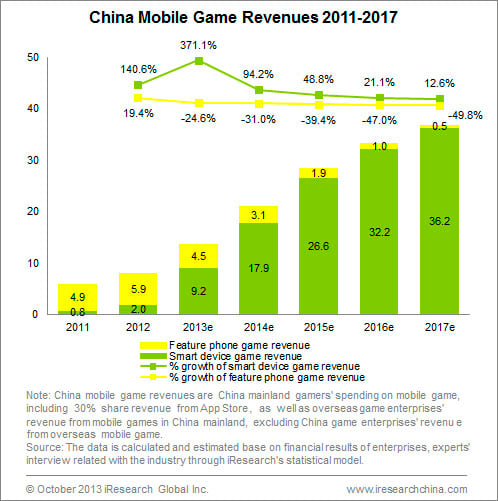 As evident from the above chart, the Chinese smart devices gaming market will continue to grow at an overwhelming pace for at least a few years. Thus, the Apple-China Mobile tie-up can be a massive growth driver for Glu.

Moreover, Glu Mobile will be pumping out 30 games in 2014 to benefit from the growth opportunity and what makes this fact even more impressive is that the company will achieve this feat with a small workforce of 521 people. Given that it has such competent employees, it is well set to sustain its run in the foreseeable future.

Zynga looks dubious
Like Glu, Zynga also witnessed a decent run-up in its share price in 2013. Its fortunes turned around when Don Mattrick replaced Mark Pincus as the CEO. The company managed to beat analysts' estimates in the last two quarters. However, whether it will sustain this trend is yet to be seen.

The primary reason behind Zynga's recent success were cost-cutting initiatives and reduction in its workforce. The company sacked 520 employees in mid-2013 and continued down the same road by slashing nearly 15% of its workforce in January 2014.

While there's nothing wrong in reducing losses, Zynga cannot continue doing this forever. It will have to consistently come up with chart-topping games in order to return to profitability. The $527 million acquisition on NaturalMotion may be a step in the right direction, but the breakeven line is far, far away and there's still a long way to go before Zynga benefits from this purchase.

Moreover, you should keep in mind that Zynga's last high-profile acquisition of OMGPOP ended in a big disaster as the company lost a whopping $528,000 on a daily basis because of this acquisition. Thus, Zynga needs to concentrate more on game developing to achieve long-term success. As of now, Glu Mobile looks a better bet out of the two.

Takeaway
It is clear that Glu is the gaming stock to buy right now as opposed to Zynga. Zynga could be a good buy in the future if the company comes up with chart-topping games, but until then, investors should stay away.