Natural and organic food have gained a lot of popularity recently since customers have become increasingly health conscious. People do not mind paying extra for food which is made with organic ingredients. This led to the emergence of natural food retailers such as The Fresh Market (NASDAQ: TFM), Whole Foods Market (NASDAQ:WFM) and Sprouts Farmers Markets (NASDAQ:SFM). However, the emergence of too many players has led to increased competition in the industry.

One of the players who have fallen prey to effects of stiff competition is The Fresh Market, which has been unable to live up to investors' expectations. Its recent fourth quarter results disheartened investors as it failed to meet the street's estimates.

Freshness seems to be lost
Although revenue surged 15% to $425.8 million, it did not meet estimates of $430 million. Factors which affected sales were severe weather conditions which led to lower mall traffic. Store closures due to heavy snowfall also hampered sales. Moreover, consumer confidence in U.S has weakened, leading to lower retail spending.

Despite these factors, the company's top line grew as the company opened five new stores during the quarter which increased sales. Even if we exclude the effect of the addition of stores, same store sales grew 3.1%; this was driven by increases in volumes as well as average transaction size.

However, the worst hit came to the bottom line. Earnings dropped to $0.39 per share from $0.43 per share last year. Huge discounts and higher marketing expense took a toll on the net income as well as the margins, which dropped 50 basis points over year ago quarter.

Inability to perform
The Fresh Market took a backseat on the competitive front. It could not perform as well as industry peers Whole Foods and Sprouts Farmers Markets. The change in stock price of the three players in the last year is depicted in the chart below: 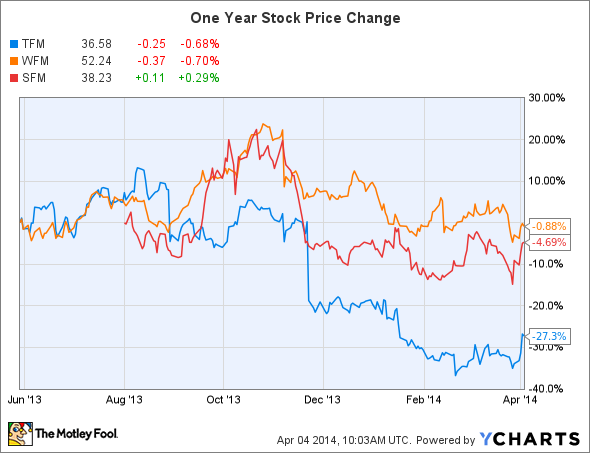 Stock prices of each of the organic retailers have been affected due to difficult conditions such as weakness in consumer spending and cold winter conditions, which hampered sales. However, both Whole Foods Market and Sprouts Farmers Markets have been able to manage it better than Fresh Market, as indicated by the change in stock price.

Fresh Market's poor performance over the last year is mainly due to its lackluster quarterly numbers. Meanwhile, both the peers reported better numbers in their recently reported quarters.

Whole Foods Market posted a decent quarter with an increase in all the key metrics. Revenue grew 10%, helped by 10 additional stores and same store sales growth of 5.4%. This was much higher than that of Fresh Market. Whole Foods' earnings jumped 7.7% to $0.42 per share, in contrast to Fresh Market's decline in the bottom line . Moreover, Whole Foods has been making efforts to overcome competitive pressures by offering discounts to customers, on most of its products, during the holiday season. These discounts helped Fresh Market to register growth in same store sales. It has also launched a reward program which should attract more customers, and will be introducing a new payment system which will enable customers to pay through their iPads .

Sprouts Farmers Markets' recent quarter was a blockbuster one with 27% jump in sales and a whopping 13.8% growth in same store sales. Growing customer interests were evident from the 8.5% jump in customer traffic and a 5% surge in transaction size. Sprouts' efforts such as improving its offerings and marketing during the most important holiday season became fruitful. It focused on providing products which resonate with customers such as gluten-free products and holiday grocery items. Private label products boosted the top line as well as gross margin, which widened by 20 basis points . This player clearly takes the cake.

The road ahead
Along with posting lackluster results, Fresh Market gave a dull outlook which further disappointed investors. It expects earnings to be in the range of $0.41 and $0.44 per share. Same store sales are estimated to grow between 1.5% and 3.5% since weather conditions and lower consumer spending will continue to dent its sales. Moreover, it declared its plan to close four stores which will affect the first quarter's bottom line.

The organic food retailer plans to remain focused on the established markets instead of entering new regions. It plans to open 23 to 25 stores to expand its footprint in the existing markets in 2014.

The company will take measures to overcome its shortcomings. It will continue to spend on promoting its products in order to boost its revenue. It will also undertake cost-cutting strategies which will help the retailer get rid of unnecessary expenses. Its plans to improve its site selection process by adopting new analytics and forecasting processes should help in estimating sales more accurately as well.

Final words
Although Fresh Market seems to be making efforts to improve its performance, it is difficult to say how successful the retailer will be. It has the lowest same store sales as compared to other players, and this is affecting total revenue. Moreover, this problem cannot be solved by opening more stores. Therefore, investors should stay away from this organic food company.

Will This Retailer Be Able to Keep Fresh? @themotleyfool #stocks $WFM $SFM Next Article
Current