Wells Fargo (NYSE:WFC) kicked off earnings season for the banks on Friday, April 11, and handily beat expectations. The company's earnings per share of $1.05 came in about 8% better than the $0.97 analysts had expected, and there was a lot of good news revealed in the report. Here are some of the key points to take note of, and what they could mean for the bank going forward.

The mortgage business fell, but it's not necessarily a bad thing

With 30-year mortgage rates much higher than they have been over the past couple of years, it's no wonder less people want to refinance their loans. Mortgage rates and refinancing volumes move almost exactly opposite of one another, as you can see in the chart below. In fact, the number of refinancing applications is at its lowest level since July 2009. 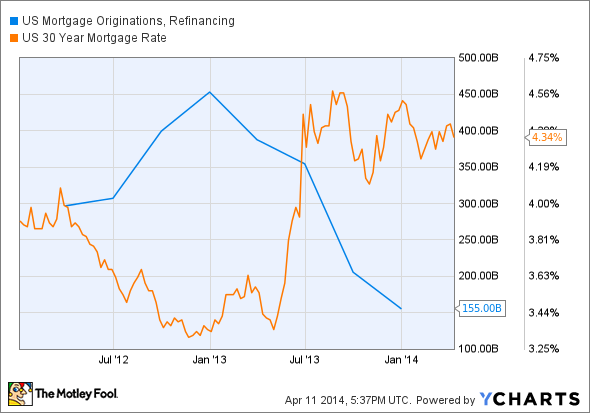 As a result, Wells Fargo's income from its mortgage business dropped sharply from $2.8 billion in the first quarter of last year to $1.5 billion now. It also doesn't look like it's going to pick back up anytime soon, with just $27 billion of mortgage applications in the pipeline now, a decline of $38 billion from last quarter.

However, don't worry too much about this. As the biggest mortgage lender in the country, it's actually a good thing to see Wells developing and growing other segments of its business. Over time, this will add diversity to the bank's income stream and produce less reliance on mortgage income.

But people are spending more on things other than homes
Despite the drop in the volume of mortgages; Wells Fargo was able to increase its loan portfolio by $4.2 billion year-over-year. According to the bank, the growth came mainly from more auto loans and growth in its commercial real estate lending business. This is very impressive growth in the face of declining mortgage lending, and indicates consumer spending is picking up -- a very positive thing for banks and the entire economy.

Wells Fargo's community banking unit made 31% more than it did a year ago, further confirming this "higher consumer activity" trend. Community banking includes such things as checking and savings accounts, as well as consumer lending activities.

Wealth management: the future of Wells Fargo?
Income from brokerage fees rose by 11.6%, and total client assets increased 8% over the past year to $1.4 trillion. For a part of the company's business which was virtually nonexistent before it acquired Wachovia, Wells has done a very impressive job of growing it over the past few years.

There is still tremendous potential for growth here. Despite the recent performance, Wells Fargo's wealth management business only represents less than 8% of the company's net income. The bank serves more than 70 million customers, only about 1 million of whom (or about 1.4%) have a brokerage account with Wells Fargo Advisors. In California alone, where it doesn't have a big wealth management presence, there are about half a million customers who could potentially be signed up for brokerage accounts.

Loan losses are getting dramatically better
Wells Fargo released $500 million from its loan-loss reserves during this past quarter, as it is seeing a remarkable low rate of loan losses. The bank's net charge-off rate was just 0.41%, very low on a historical basis and far below the 0.72% rate of just one year ago.

Between the extremely low loan losses, growing wealth management business, and thriving consumer banking business, Wells Fargo is proof that the financial crisis is in the rear view. With a very high-quality loan portfolio and tremendous growth potential, this bank is one of the best in the business and should deliver for its investors for years to come.