On April 8, The Wall Street Journal reported that Google (NASDAQ:GOOG) appears to be moving more into the travel business than ever before. This move by the Internet search giant may seem like a surprise to some, but it isn't so far-fetched when you consider the other types of areas the company's ventured into. The big question for investors moving forward is not whether Google will be successful (it likely will be) but rather, how its move will impact major travel sites like Priceline.com (NASDAQ:BKNG) and Expedia (NASDAQ:EXPE).

Travel is a big business and makes investors a fortune!
Currently, the greatest success story in online travel appears to be Priceline.com. Over the past three years alone, the company saw its revenue grow 56% from $4.4 billion to $6.8 billion, driven largely by an increase in room nights sold. Expedia has also done reasonably well, as shown by the 38% jump in revenue during the same timeframe from $3.4 billion to $4.8 billion. 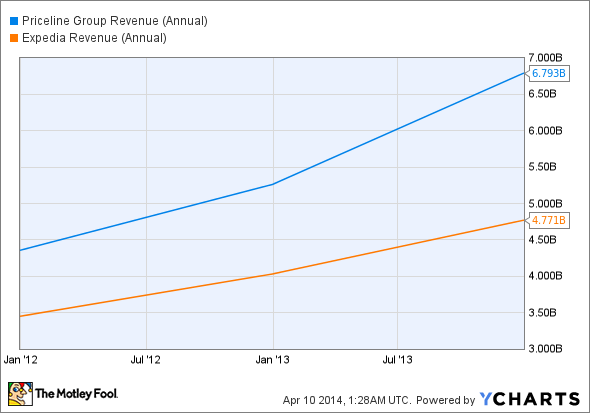 Although both businesses have seen their sales soar, only Priceline.com has been capable of turning its rising revenue into rising profits. Between 2011 and 2013, the company's net income skyrocketed 79% from $1.1 billion to $1.9 billion. In addition to benefiting from higher revenue, Priceline.com saw its cost structure change drastically. Yes, the company's selling, general and administrative expenses did rise from 36.6% of sales to 45.8%, but its cost of revenue falling from 29.3% of sales to 15.9% more than compensated for that.

Expedia, as it turns out, has not been so lucky. Over this time horizon, the company's net income actually fell 51% from $472.3 million to $232.9 million. After excluding the gain from discontinued operations the company reported in 2011, its net income only declined 28% but this still isn't something to be proud of. The main driver behind Expedia's falling profits were its selling, general, and administrative expenses, which increased from 52.3% of sales to 66% as management strives to catch up to Priceline.com. 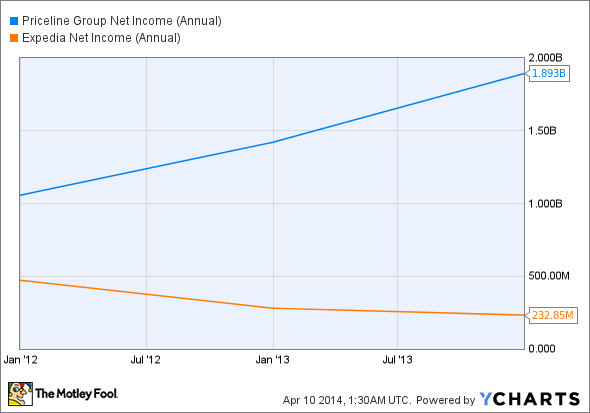 Google's travel foray is raising some eyebrows
Right now, Google's online travel ambitions make sense, but there is some sizable risk involved in its decision. By jumping on board the travel express (pun intended), the company can get in on the action of a large and fast-growing industry. In 2013 alone, the travel and tourism market accounted for $450 billion in revenue and analysts expect the field to grow by 3.5% by the end of 2014.

Grabbing hold of just 10% of the travel and tourism market share would nearly double Google's $59.9 billion in revenue and could make for some serious profits. In 2013, Priceline.com's net profit margin came out to 27.9%, a decent clip higher than Google's 21.6%. Jumping into this business could mean significant profits for the business and could pave the way for even faster growth moving forward.

On the downside, however, there is a chance that Google's foray into online travel could harm the company's relationship with Priceline.com and Expedia, both of whom are significant customers of Google. Last year, Priceline.com generated about $1.5 billion worth of Google's ad revenue, while Expedia earned the business an estimated $1 billion. In aggregate, this made up about 5% of Google's ad revenue for the year.

A dark horse to consider
On top of harming its relationships with Priceline.com and Expedia, as well as the competition the company will see from them moving forward, Google has another serious competitor to fight against: Groupon (NASDAQ:GRPN). In 2013, Groupon Getaways, Groupon's travel business, generated revenue of only $120 million.

Because of this size, investors might think Groupon isn't a serious contender in online travel, but this might not be true. Despite its low revenue in the travel segment, the company appears to be more profitable than both Priceline.com and Expedia. Unfortunately, Groupon only provides gross profit data on its travel operations, but setting its metrics next to Priceline.com and Expedia puts the two companies to shame.

As we can see, Groupon generates more gross profit than both Priceline.com and its partner, Expedia, by a reasonable amount. Even the revenue the company generates as a percent of billings is substantially higher. This operational efficiency might reward shareholders handsomely if the company's management team can scale up its travel business accordingly and could stymie Google's efforts to make much of a dent in the industry.

Foolish takeaway
Based on the data provided, it's pretty clear Google hopes to make quite a splash in the online travel business. How this will affect the business and its shareholders moving forward is something only time will tell, but if the company can effectively leverage its resources and overcome its competition, the rewards might be well worth the risk.