Because the S&P 500 (SNPINDEX:^GSPC) is composed of the 500 largest public companies by market cap listed on the Nasdaq and NYSE. It is generally considered a bellwether of the U.S. economy. What's truly unique about this index, however, is that it employs a weighting system such that bigger companies make up a larger portion of the index than smaller companies. The sum effect is that larger companies have a disproportionate effect on the overall performance of the index. And judging by the S&P 500's record run over the last five years that saw the index rise by 114%, the largest companies have been doing quite well. Even so, the S&P 500 has started to shown signs of weakness lately, falling by a little over 1% year to date. 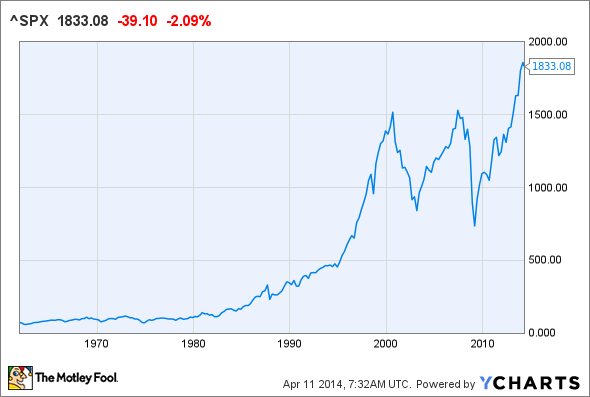 As health care stocks have taken a major hit in recent weeks shown by the Vanguard Health Care ETF falling nearly 6% in the past month and these stocks composing a fairly decent proportion of the S&P 500 by market cap, they could be a big reason for the index's recent weakness. With this idea in mind, let's take a closer look at the S&P 500's three biggest pharmas, namely Johnson & Johnson (NYSE:JNJ), Pfizer (NYSE:PFE), and Merck & Co. (NYSE:MRK).

Johnson & Johnson defying the downturn
With its $273 billion market cap, Johnson & Johnson is the index's biggest health care stock. Yet, shares of Johnson & Johnson are actually up 6.52% year to date, outperforming both the S&P 500 and the health-care sector in general. As I opined last month, Johnson & Johnson looked like a good pick during these turbulent times because it is a well-diversified company with growing revenues. I am particularly optimistic about its prostate cancer drug Zytiga that has been growing sales by double digits the last few quarters and the drug's outlook remains strong, despite newer drugs entering the market. In sum, we certainly can't pin this downturn on Johnson & Johnson.

Pfizer trading sideways
Pfizer's $195 billion market cap makes it the index's second largest biopharma. Pfizer's relative stability is notable in light of the fact that there hasn't been much going on with the company that should have a near-term material impact. That said, Pfizer has been making headlines on the clinical front with its experimental breast cancer drug palbociclib at the recent American Association for Cancer Research meeting in San Diego, where the drug was reported to roughly double progression-free survival among patients with advanced disease. Although Pfizer is hoping to apply for accelerated approval for the drug and it's predicted to become a megablockbuster if approved, that scenario is far from being etched in stone. Looking ahead, I don't see many negatives or positives on the near-term horizon, which is probably why the stock has traded sideways for the year. But again, Pfizer's positive gains before yesterday suggest that it has not been a major factor in the S&P 500's recent weakness.

Merck has been painting the tape green this year
Merck's $164 billion market cap places it third on the list of the S&P 500's biggest biopharma. What's notable about Merck is that it has gained 13% this year in the face of the overall downturn in health care stocks and the S&P 500. Moreover, it has been one of the best performers in the S&P 500 this year. What appears to be getting investors excited is Merck's strong clinical pipeline that boasts of intriguing experimental drugs for cancer and hepatitis C. Earlier this week, the company reported that its hepatitis C drug for treatment-naive patients showed a 98% cure rate in a mid-stage trial. So, we definitely can't blame Merck for the S&P 500's recent woes.

Foolish wrap-up
While it's tempting to blame the health care sector for the S&P 500's struggles, the tale of the tape suggests otherwise. Large-cap pharmas are moving higher for the most part, likely due to investors seeking safe havens during these turbulent times (stable companies that pay dividends). Looking ahead, I expect these large pharmas to continue to do well as investors turn to more defensive stocks, and health care in general to rebound once we get into earnings season. My overarching view is that health care's monstrous run did get ahead of itself, but the handful of new blockbuster therapies launched recently will probably reignite the rally once earnings are released. So stay tuned!