In just a few months Isis Pharmaceuticals (NASDAQ:IONS) has gone from investment darling to investment dog, dropping nearly 20% since the beginning of this year.

But little has changed at Isis, suggesting the recent move lower is tied more to profit-taking and momentum than to long term opportunities stemming from the company's antisense technology. Given that backdrop, lets take a closer look at Isis and see whether the share slide is justified. 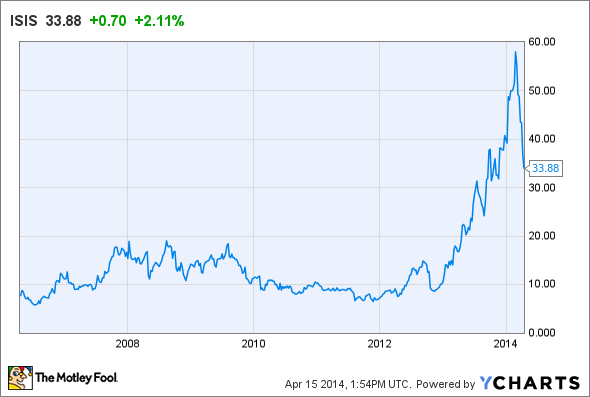 Making sense out of antisense
Gene therapy is one of the most exciting areas of biotechnology research and development. The concept is simple. Identify over- or under-active genes and develop drugs that return them to their normal levels of activity.

Across the biotech industry, few have been as prolific as Isis in coming up with disease targets and potential new treatments. That success stems from Isis' unique drug discovery platform and RNAi-targeting technologies, which allow drugs to bind with genes rather than proteins.

Despite the specificity of targeting one gene, antisense drugs' ability to accumulate in organs like the liver and kidney suggest that developing drugs that target RNA in those organs may allow antisense drugs to treat a wide variety of diseases.

As a result, Isis' pipeline is chock-full of intriguing clinical stage drugs that may eventually reach the market.

Pumped up pipeline
Isis has more than 30 ongoing trials across a variety of diseases including cardiovascular, cancerous, and inflammatory conditions. Among those programs, the closest to reaching the market are drugs for TTR amyloidosis and prostate cancer.

TTR amyloidosis is a rare disease. In healthy patients, the TTR protein helps transport vitamin A around the body. In patients where the TTR gene is mutated, mis-folded TTR proteins accumulate in tissues such as peripheral nerves or the heart. While there are over 100 mutations of the TTR gene, cases are categorized as either familial amyloidotic polyneuropathy, or FAP, and familial amyloidotic cardiomyopathy, or FAC.

As a result, GlaxoSmithKline (NYSE:GSK) agreed to partner with Isis on ISIS-TTRrx, committing to paying Isis up to $50 million in milestone payments associated with the current phase 2b trial. Additionally, Glaxo boosted its previously planned regulatory and sales milestone payments to Isis in 2012 and agreed to pay Isis double-digit royalties on any eventual sales of ISIS-TTRrx.

In order for Glaxo and Isis to capture the market share opportunity in TTR, they will need to outmaneuver RNAi competitor Alnylam (NASDAQ:ALNY)Alnylam is also working on a promising compound, patisiran, for FAP, and that drug, which is being co-developed by Sanofi's Genzyme, is currently being studied in phase 3 trials.

Isis also has a well-heeled partner in Teva Pharmaceuticals (NYSE:TEVA) on Custirsen, a potential adjunct therapy for metastatic prostate cancer. If Custirsen succeeds in its current phase 3 trials, the drug could capture sales as a first line treatment dosed alongside docetaxel in mCRPC patients. Data from that trial is expected this year, but investors should watch Teva's other ongoing study of Custirsen as part of a treatment regimen for non small cell lung cancer too.

So far, Kynamro sales have been small. The drug is currently only approved to treat patients with homozygous familial hypercholesterolemia, or HoFH, a small population of people with high bad cholesterol levels that are resistant to other treatment. As a result, Isis isn't even breaking out its share of royalties from Kynamro sales yet. But the drug should continue to see sales climb, especially if late stage studies in heterozygous hypercholesterolemia pan out. While there are less than 350 people in the U.S. with HoFH, there are as many as 600,000 cases of HeFH.

Given the company's substantial pipeline, there's plenty of news coming that may cause Isis shares to move up or down this year. Investors interested in antisense companies need to consider owning Isis given its leadership position, but should recognize Isis shares will continue to come with plenty of volatility.