The continuing success of Chipotle Mexican Grill (NYSE:CMG) is about more than selling you burritos. It's about selling you on a certain kind of eating, and maybe even a certain kind of lifestyle. It's the back-to-basics, know-where-your-food-comes-from approach to eating that may be driving as much interest in Chipotle as its tasty carnitas and guacamole. Chipotle continues to step up its efforts in pushing this awareness, and it's paying off at the registers.

It's a big reason why its stores were selling 9% more on average last year, while former parent McDonald's and competitor Yum! Brands struggle with slower same-store sales growth despite far bigger advertising budgets and a continual supply of new items hitting their menus.

Marketing a message
By selling you on a diet that eschews meat produced at factory farms, uses locally sourced products where possible, and is built from simple, healthful ingredients, Chipotle has tapped into a growing curiosity in the U.S. about how food is produced. Its marketing has pushed the anti-corporate, anti-factory-farm message hard, whether it's through the Scarecrow video game or online sitcom Farmed and Dangerous.

Much in the same way Whole Foods Market (NASDAQ:WFM) helped to bring about a growing awareness of choosing healthier fare while grocery shopping -- we need only to look at how fast the health-food sections in most supermarkets have grown for evidence of this -- Chipotle is leading the charge in bringing that consciousness to dining out.

Over the past  decade, Whole Foods' growth has blown away that of traditional supermarket chains. Have a look at the 10-year revenue growth of Whole Foods against that of Kroger, SUPERVALU, and Safeway: 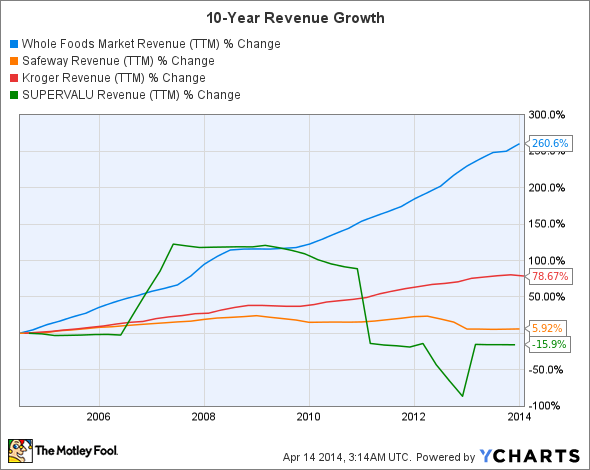 Not only that, but its success has also given birth to competitors like The Fresh Market and Sprouts. And now, even Wal-Mart, the world's biggest grocer, has moved to put organics and natural foods on its store shelves. Last week, the company announced a partnership with private producer Wild Oats to stock 100 new items at 2,000 of the chain's U.S. stores.

Fellow Fool Jason Hall noted in a recent article that Wal-Mart's move into organic and natural food "is a clear indication that organic and 'better-for-you' packaged foods are here to stay." In one way, Wal-Mart's move -- just like the rise of Sprouts and The Fresh Market – is competition. But in another, it's a clear validation of the trend that Whole Foods has been so instrumental in advancing over the past 22 years.

"The more they learn, the more likely they will come to Chipotle"
What's true for groceries should also hold true for restaurant foods, and on that front, there is no bigger driver of the "better-for-you" food trend than Chipotle.

The better Chipotle can spread this message and really drive it home, the more likely health-conscious consumers are to frequent the eatery. They'll do so in part because they start to see Chipotle as a healthful option. But perhaps more important, they start to see other options as unhealthy.

Here's Chairman and Co-CEO Steve Ells on the matter during the fourth-quarter earnings call:

Many of the issues that concern us such as GMOs or the overuse of antibiotics in livestock farming are complex and sometimes difficult to understand; that's why we create marketing designed to make people more curious about these issues. We believe the more curious they become and the more they learn, the more likely they will [be to] come to Chipotle.

That growing curiosity is a big reason that Chipotle rides above fast-food competitors. McDonald's same-store sales continue to fall, down four straight months, with sales in the U.S. lagging those in other countries. Yum!, meanwhile, saw flat same-store sales in 2013.

The Foolish bottom line
We can get a pulse of the growing importance people are putting on natural foods from the controversy that was stirred up a couple of months back over an ingredient that was found to be in Subway's fresh-baked breads. Deemed by some writers as a "yoga-mat ingredient," the compound has been used in commercially baked breads for many years.

But the reaction as word spread across social media prompted Subway to swiftly declare that it would stop using the ingredient. That type of awareness shows that Chipotle's message is working. At Chipotle, what's good for awareness is also good for the top and bottom lines – and bad for its competitors'.

Is Chipotle's Winning Product Its Food, or Its Message? @themotleyfool #stocks $CMG $WFM Next Article
Current