A new report from Twopcharts reveals a massive problem with Twitter (NYSE:TWTR) -- approximately 44% of its 974 million users have never tweeted. Moreover, 30% of Twitter's accounts (292 million users) have only tweeted one to 10 times, while only 13% of all accounts (127 million) had tweeted over a hundred times. Those dismal numbers paint a dramatically different picture from the 241 million "active" users that the company claims.

StatusPeople discovered that 6% of my followers are fake, and 40% are inactive. Source: Author.

Combine these factors with a growing black market that sells users thousands of fake Twitters followers for a few dollars, and we realize that Twitter is less of a social network than a social mirage. Let's take a closer look at how Twitter's "fake" problem, which it continually ignores, could become a real one very soon for the company.

Facebook is a closed network in which users confirm friend requests, share their life updates via a News Feed, and categorize contacts into different lists such as families, friends, and co-workers. Users can separately set up business and fan pages on Facebook to build a following.

Twitter, on the hand, is a place where people shout 140-character messages into a hashtag-filled river in the hopes of gaining more followers. It's a business model set up to encourage endless self-promotion.

As a result, the meaning of a friend count on Facebook and a follower count on Twitter mean opposite things. It's odd to have 5,000 Facebook friends, yet it's prestigious to have 5,000 Twitter followers. The reason is simple -- Facebook is associated with personal information (your real life) while Twitter is associated with fame among strangers (your public image). Simply put, no one wants 5,000 stalkers but everyone wants 5,000 fans.

Sustaining the business of Twitter's mirage
The problem with Twitter's business model is that it encourages attention-seeking users to build tall soapboxes on the backs of their followers. Moreover, followers generally associate larger followings with more fame. That's where the shady business of selling fake followers comes in.

Individuals and businesses can deliver hundreds to thousands of Twitter followers for $1 to $1,000. These companies use automated software to randomly generate user names and profile details, then direct them all to simultaneously follow a client. Of course, none of these bot followers actually care what you have to say -- it's all window dressing to make your account look more attractive.

Buyfollowersfast.com, one of many Follower vending services. Source: Author's screenshot.

That's not to say that the window dressing doesn't work. Some individuals and businesses have reported that buying a few thousand followers definitely gives them more credibility, leading to more "real" followers tuning in. However, employers in the social media industry have started weeding out "fakers" by using software like StatusPeople's Fake Follower Check to determine an applicant's true social influence.

Twitter has occasionally tried to zap these fake accounts, but since the businesses providing them are so easy to set up, they pop back up like weeds. Italian security researchers and bloggers Andrea Stroppa and Carla De Micheli estimated last year that businesses selling fake Twitter followers have raked in $40 million to $360 million -- a number that is steadily rising alongside Twitter's real user base.

Should Twitter be worried?
Financially, Twitter is suffering from a classic problem that crushed many promising tech companies in the past -- decent top line growth weighed down by big expenses. In fiscal 2013, Twitter's revenue jumped 110% year-over-year to $665 million. Unfortunately, a net loss of $645 million -- down from a loss of $79 million a year earlier -- completely wiped that out. 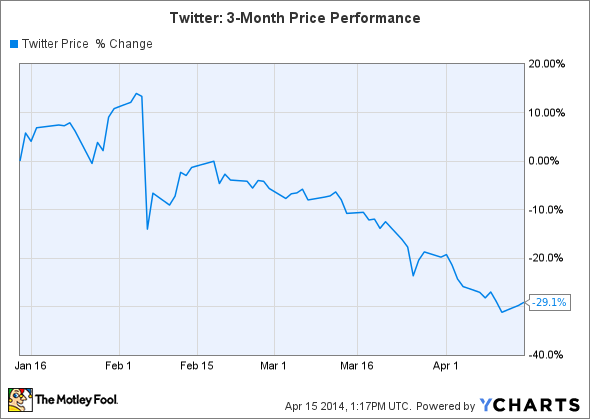 89% of Twitter's top line is generated by advertising through three main products -- Promoted Tweets, Promoted Accounts, and Promoted Trends. Balancing those three sources of revenue is tough, especially since over-promoting them can tarnish Twitter's reputation as an unfiltered live news feed. The good news is advertisers are still biting -- advertising revenue per thousand timeline views rose 76% year-over-year to $1.49 in the fourth quarter of 2013.

The problem is that advertisers will eventually notice Twitter's problem with fake followers and inactive accounts. If Twitter fails to weed out these accounts, they could adversely impact the company's pricing clout with advertisers. Moreover, Twitter has stated that the "substantial majority" of its advertising revenue is generated on a pay-for-performance basis, in which "advertisers are only charged when a user engages with their ad." Unfortunately, I doubt that bots or inactive users click any ads at all.

Not all is lost
There's a bright side to all of this. The fact that users are willing to buy fake accounts speaks volumes regarding the necessity of Twitter, which has arguably become the social backbone of our culture.

However, Twitter needs to clean house soon to avoid being buried by junk accounts that ruin the site's reputation. It can do this by updating its APIs and banning fake account peddlers. Unfortunately, I suspect that Twitter realizes that its self-sustaining beast of fame and vanity is evolving well beyond its control, and efforts to weed out the imposters could ultimately be futile and costly to its bottom line.