Berkshire Hathaway Chairman and CEO Warren Buffett is often associated with Coca-Cola (NYSE:KO). His relationship with the company goes back to the late 1980s, when he began buying shares. He bought some 14 million shares in 1988, for $592 million. Today, Berkshire holds 400 million Coca-Cola shares, more than 9% of the company. Berkshire is -- by nearly double -- the largest shareholder, and Buffett easily the best-known. The thing is, Buffett hasn't actually bought any shares of Coca-Cola in more than a decade -- actually closer to 15 years. While this is a testament to Buffett's steadfast buy-and-hold mentality, the question is: Would Buffett buy Coca-Cola today, or would he buy home soda-maker upstart SodaStream (NASDAQ:SODA)?

On the surface, it sounds like an easy call that Buffett would "buy American," as he famously called for us all to do during the market collapse in 2008 and 2009, and stick with Coca-Cola, and not the Israeli upstart in SodaStream. However, I don't think that's necessarily the case, all things considered. Let's take a closer look, and see what we can learn.

Looking for value, but also looking for a path to growth
Buffett is often miscalled a "value" investor. And while he is steadfast about buying at reasonable prices and values, it sometimes gets overlooked that Berkshire Vice Chairman and partner Charlie Munger's influence on Buffett led him to revise the approach that he learned from Benjamin Graham.

Graham was known to look for "cigar butts," i.e., companies that were cast aside, but like a cigar butt with one or two puffs left in them, they still had some hidden value remaining. Munger's influence is largely credited with Buffett's shift from just looking for hidden value to, more importantly, looking for companies with strong advantages that would lead to predictable future earnings for years. Buffett said it best himself: "It's far better to buy a wonderful company at a fair price than a fair company at a wonderful price."

Coca-Cola has been an amazing investment for Berkshire, returning more than 2,500%, including dividends, on that first buy back in 1988. SodaStream, however, has handily outperformed Coke since its IPO in November 2010: 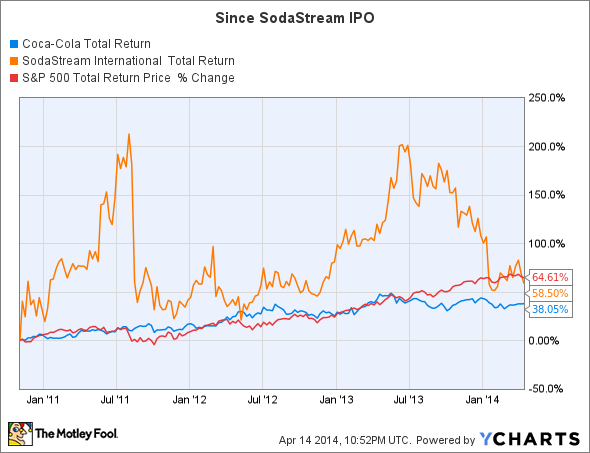 As you can see, it's also been wildly volatile, having twice achieved more than a 200% return only to fall back to earth. The most recent tumble was a product of what looked like falling flavor syrup sales in the summer and fall, and then a mixed holiday earnings report. Demand was strong, but SodaStream seemed to struggle to meet that demand, wasting resources to divert inventory from one region to another and paying a lot of money for repackaging merchandise meant for one country in new packaging suited to its new destination.

Bad news is good news
The good news? Holiday demand was strong, and management seems to have learned what it needs to do to better meet demand going forward. Additionally, Coca-Cola's decision to get in bed with Keurig Green Mountain is a strong positive indicator for SodaStream. While some say this increased competition is bad, it's really not at all. When the biggest player in your business follows your lead, chances are you're on to something big.

Additionally, SodaStream's position has never been one to compete against Coke at its own game. Coca-Cola isn't coming into this with the same value proposition as SodaStream, which largely talks about the cost advantages. Coke's approach is almost sure to be similar pricing to its bottled beverages, just with the flexibility to make them at home, versus lugging gallons of soda home from the store. SodaStream's lower-price business should continue to thrive, while Coke's entering the market will drive even more consumer interest.

You want to see -- in one table -- why Coca-Cola is getting into the home soda business? 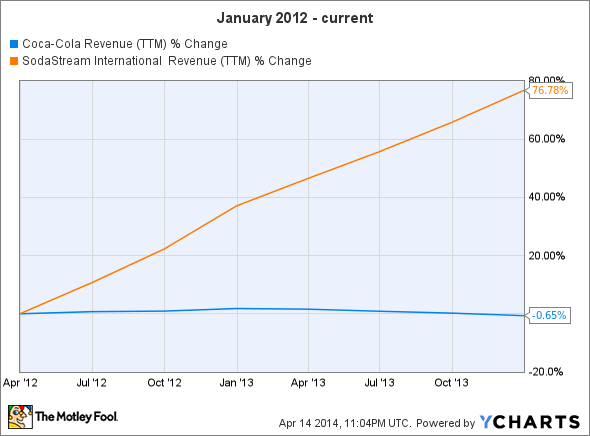 Simply put, there's predictable growth happening in SodaStream's business, and the traditional soda business is in decline in the United States.

So there's growth. What about a fair price?
Here's how Coca-Cola's and SodaStream's price-to-earnings ratios compare -- both forward and trailing -- since SodaStream's IPO: 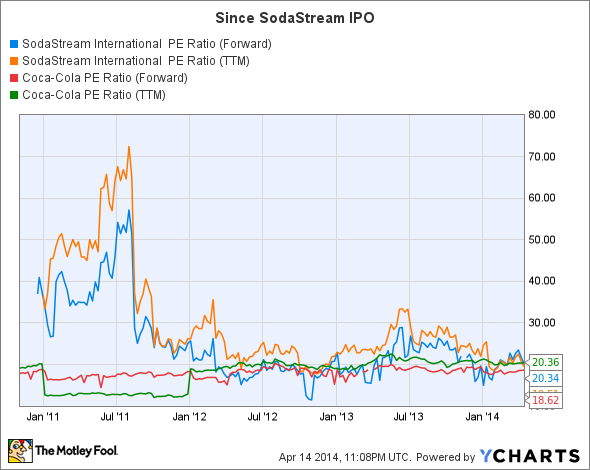 SodaStream has reached a point where it's as cheap as Coca-Cola by this metric. Sure, SodaStream in many ways "earned" the beating that the stock has taken, as management hasn't exactly excelled at leveraging the growth potential of the business with the recent missteps over the holidays. But as it's a young, growing company, investors have a tremendous opportunity to buy a very small company very close to the beginning of its growth story.

Final thoughts: Would Buffett really buy SodaStream?
Whatever Buffett would ultimately do, SodaStream's nearly $800 million market cap means it wouldn't really move the needle for Berkshire, but Buffett has said in the past that Berkshire's size has limited the opportunities he could take advantage of. He's gone so far as to state that he could get better rates of return with much smaller amounts of money. As individual investors, we are in exactly that position.

Is SodaStream a fair company at a great price, or a great company at a fair price? The following disclosure should make it pretty clear what I think -- I own shares myself. Profitable, growing, and priced as if it will grow at the same rate of a company that's more than 200 times larger, SodaStream sounds like a stock to buy today, and hold for the next 26 years. I wouldn't be surprised to hear Buffett agree.