When it comes to banks in the U.S., there are two very distinct categories: the "big four", and everyone else. Now that these four -- Citigroup (NYSE:C), Bank of America (NYSE:BAC), JPMorgan Chase (NYSE:JPM), and Wells Fargo (NYSE:WFC) have all reported earnings, we have a pretty good picture of the state of the banking industry. Here are three major trends to notice, and what to expect going forward.

Mortgage income is down

All four banks reported significant drops in mortgage revenue for the quarter. Interest rates are no longer at record lows, and are about one percentage point higher than they were this time last year. Although rates are still historically low, it makes less sense for homeowners to refinance existing mortgages, and this is where most of the decline is coming from. 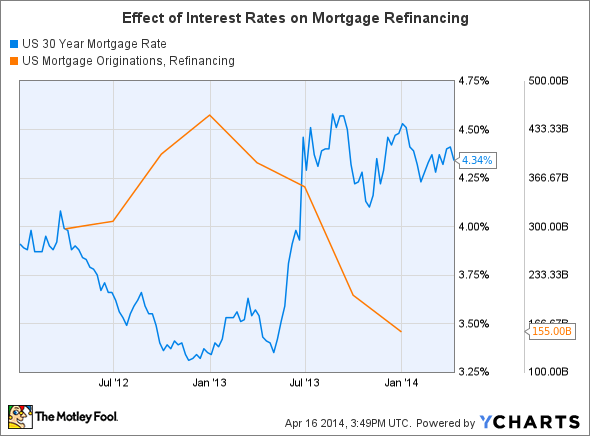 Wells Fargo, the nation's largest mortgage lender, originated 28% fewer mortgages than it did during the fourth quarter, which translates to a very significant drop of about $14 billion in loans. JPMorgan reported almost the exact same thing, with their mortgage originations down 27% from last quarter, and a staggering 68% from this time last year.

Worse yet, Bank of America's consumer real estate division lost $5 billion for the quarter on a 65% year-over-year decline in originations. Citigroup fared worst of all in this department with a decline of 71% last year, however at just $5.2 billion this quarter (14% of Wells' origination volume), the bank is not nearly as dependent on mortgage revenue as its peers.

With 3.5% mortgage rates a thing of the past, I'm not expecting refinancing to pick up anytime soon. However, the housing market is improving dramatically and lending standards have relaxed lately, so we should see more purchasing activity than in recent years.

But other consumer activity is up!
The banks are seeing increased consumer spending and higher activity in other types of lending, which is helping to offset the lost mortgage income. For example, Wells Fargo actually increased its overall loan portfolio by $4.2 billion since the end of 2013, mainly on increases in auto loans and commercial real estate lending. In fact, the bank originated 15% more auto loans than the previous quarter. Additionally, 38% of Wells Fargo's retail banking customers now have a credit card account with the bank, up from 34.1% last year.

Bank of America's consumer banking division reported a 15% increase in profit, and reported issuing more than one million new credit cards in the quarter. JPMorgan reported originating 3% more auto loans than the first quarter last year, as well as a 10% increase in credit card sales volume. Their business banking loans posted the most impressive increase, up an impressive 22% from last year. Finally, Citigroup's loan portfolio grew by about 7% from the prior year period.

Also, the consumer banking divisions of all four are thriving, with deposits up across the board.

Less bonds were traded
Fixed-income (bond) trading was down pretty much across the board. This can be blamed on the Federal Reserve's "unclear" monetary policy, which caused many investors to keep their money on the sidelines. There are also higher annual costs for the banks as a result of new regulations designed to make the banking system safer.

JPMorgan, which is the most dependent of the big four on trading revenue, performed the worst here, with fixed income revenue down 21% for the quarter, and revenue from equity trading down by 3% as well. Surprisingly, Bank of America only reported a 2% year-over-year decline in fixed income revenue, making it the best performer of the group in this area.

The Fed has given a little more clarity on their intentions, so we should see trading revenues gradually increase, but I have to wonder whether or not some of the revenue is gone forever due to the new regulations.

A golden opportunity?
For those who are patient enough to ride out the storm of regulations, winding down of bad assets, and other risk associated with the bank, you could be handsomely rewarded. These banks are making lots of money (JPMorgan expects a return on tangible common equity of 16%), and still trade at historically cheap valuations...a great combination for a buying opportunity!