So Q1 results season is over for the big banks and many of their smaller peers, meaning those lenders can get on with their lives. The quarter was a mixed one for the big four, with Citigroup (NYSE:C) rising above diminished expectations and sector champ Wells Fargo (NYSE:WFC) notching the latest in a series of all-time-high quarterly net profits. On the sad-face side, Bank of America (NYSE:BAC) swung to a loss and  JPMorgan Chase (NYSE:JPM) fell short of expectations.

This week, happenings in the industry will probably be overshadowed by a bunch of famous stock market stars weighing in with their latest quarterly results (General Motors, Apple, and Facebook, to name but three).

Nevertheless, there will be a few events for financial sector participants and observers to keep an eye on. Tomorrow, Citigroup holds its annual stockholders' meeting and we shouldn't be surprised to witness some dissent in the ranks. CEO Michael Corbat remains on the hot seat, particularly since the AGM comes less than a month after Citigroup's capital allocation plans were dashed by the Federal Reserve in its annual Comprehensive Capital Analysis and Review.

Citi's Q1 results were encouraging and the bank isn't doing badly as some disgruntled observers have suggested, but that CCAR result still stings and the company's stock price could be higher. Out of the big four, Citigroup's shares have been the clear laggard over the past five years, and you can bet its investors are well aware of this. 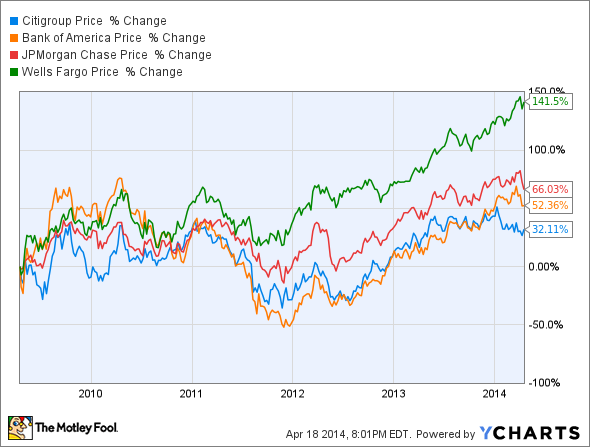 The banks that have sizable mortgage lending operations -- yes that particularly applies to you, Wells Fargo and JPMorgan Chase -- should see some impact if this week's figures for existing and new single-family-home sales in March are far from the current consensus. At the moment, the average estimate for the former is 4.55 million (down from the February number of 4.60 million) and for the latter it's 450,000 (440,000 the previous month).

Few seem to be anticipating a big month-over-month change up or down, so any more significant movement is liable to rock the shares of those banks. The March existing home sales data is to be released tomorrow morning, with the new home number coming in on Wednesday.

All in all, now that most financial majors have reported their latest earnings, the coming days shouldn't be as eventful as the preceding week. The banking sector has had its turn in the sun recently; it's time for it to step back a bit from the light just now.