The market for diabetes treatment has never been bigger, and that is propelling sales of Johnson & Johnson's (NYSE:JNJ) Invokana higher.

According to data from Express Scripts, the nation spent 14% more on diabetes drugs in 2013 than it did in 2012. A major reason for that jump is a new wave of therapies, including Invokana, that are designed to improve how the body eliminates glucose. Since Invokana helped lift Johnson's first-quarter sales in the U.S. last quarter, let's look at its potential for the rest of 2014. 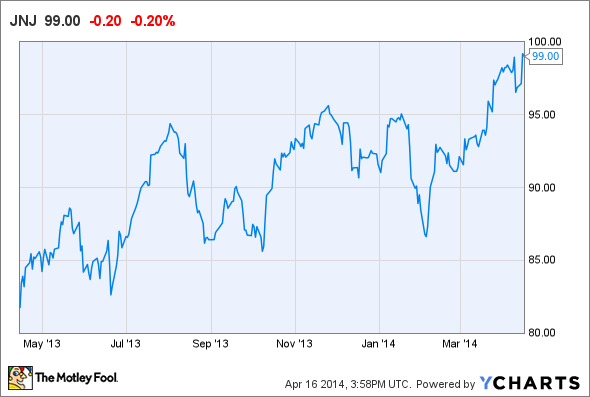 Big market getting bigger
Unfortunately, some 70 million people in developed regions, including North America and Europe, have been diagnosed with diabetes, and 38% of patients fail to properly take their current medication. As a result, the need for new, game-changing diabetes therapies is big.

As large as the market is, it's only getting bigger. Express Scripts expects spending on diabetes treatment will grow 11% in 2014, 12% in 2015, and 10% in 2016. But those increases only hint at long-term spending. After all, the global patient population of diabetics is expected to grow from 365 million people today to 550 million people by 2030.

Given the need for therapies and the size of that market, drugmakers such as Johnson & Johnson have been hard at work developing next-generation drugs like Invokana, the first in a new class of diabetes drugs to win FDA approval.

Invokana targets the SGLT2 protein in the kidney that aids in the reabsorption of glucose. Since Invokana blocks the kidney's ability to reabsorb glucose, it helps blood glucose levels fall by allowing more of it to be eliminated through patients' urine.

Since Invokana was the first SGLT2 inhibitor approved by the FDA, it has a first-to-market advantage that is enabling it to capture market share. While J&J doesn't break out sales of Invokana yet, the company's "other" drug sales, within includes Invokana, posted nearly 15% growth in the first quarter, reaching nearly $300 million.

Although Johnson & Johnson did not share much Invokana sales data in its first-quarter earnings press release, the company did give investors more insight during its conference call.

In the first quarter, Invokana contributed 2.5% to Johnson & Johnson's U.S. growth rate, and captured a bit more than 2% prescription market share in type 2 patients, excluding prescriptions for insulin and metformin. That market share was up from 1.5% in the fourth quarter.

Competition is coming
While Invokana cut the path as the first SGLT2 inhibitor, others are following behind. AstraZeneca (NASDAQ:AZN) won FDA approval for its SGLT2 drug, Farxiga, in January.

AstraZeneca purchased the half of its diabetes partnership it didn't own from Bristol-Myers Squibb in December. Farxiga joins a diabetes lineup that already featured GLP-1 drugs Byetta and Bydureon too. While it remains to be seen if Farxiga can steal market share from Invokana, analysts think the drug's peak sales could eclipse the $1 billion blockbuster mark.

Merck (NYSE:MRK) and Pfizer are developing their own SGLT2 inhibitor, ertugliflozin. Ertugliflozin is in phase 3 trials; if approved, it would join Merck's already dominant diabetes blockbuster Januvia in the company's product lineup, and Merck will capture 60% of the drug's profits.

Not to be left out, Eli Lilly (NYSE:LLY), the maker of the widely used blockbuster insulin Humalog, hopes to soon sell its own SGLT2 inhibitor, empagliflozin.

Lilly is co-developing that drug with Boehringer Ingelheim; in studies, using the drug alongside insulin significantly cut glucose levels versus insulin alone.

Despite those solid trial results, the FDA issued the two companies a rejection letter in March, citing concerns with one of Boehringer's manufacturing plants. However, the EU seems less concerned with that plant, and its advisory Committee for Medicinal Products for Human Use recommended the drug's approval just of couple weeks later.

Despite the speed bump, the two companies this month returned to the FDA with a new application for a regimen combining empagliflozin with a DPP-4 inhibitor, which stimulates insulin production in the pancreas.

Fool-worthy final thoughts
Industry watchers think Johnson & Johnson's Invokana could eventually achieve peak sales of more than $2 billion. While that could prove correct, for now investors will have to see whether the growing market will support more than one SGLT2 drug. That means J&J''s investors should pay attention to results from competitors AstraZeneca, Merck, and Lilly this year.