There is something to be said, at times, for shareholders who advocate breaking up conglomerates like the industrial giants General Electric (NYSE:GE) or Honeywell. Both are sprawling operations, subject to the ebbs and flows of vastly different industries and global economies. Their management teams strive to strike the right balance for investors, but there's no shortage of research showing that the market rarely rewards companies like these.

Instead, their share prices can be shackled due to the well-documented "conglomerate discount," which is currently illustrated, for example, by the web portal Yahoo!'s worthless core business in light of its upcoming Alibaba spin-off. As the thinking goes, investors don't always want the whole kit and caboodle when an a-la-carte menu will do just fine.

But then there are times when conglomerates seem to make sense, when all of the businesses encompassed under one umbrella are humming along, quarter after quarter. They might be moving at different speeds, to be sure, but the end result is a more reliable earnings stream and more stable cash flows, both of which can lead to cheaper financing, increased reinvestment, and potentially higher redistributions to shareholders.

In these cases, you could argue that the whole of a conglomerate is actually worth more than the sum of the parts. It's a rarity, perhaps, but Warren Buffett's done a fine job at Berkshire Hathaway proving that conglomerate discount doesn't always apply.

Likewise, the aforementioned diversified industrial companies GE and Honeywell have crafted a recipe for success that's translated to market-beating returns over the past year as well. Consider the performance of both stocks when compared to the S&P 500 index since April 2013: 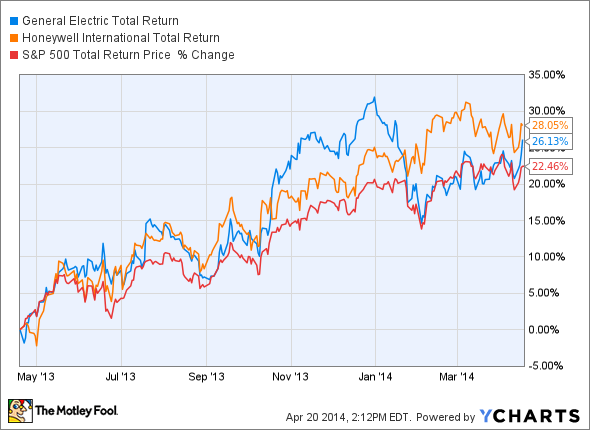 As illustrated, both GE and Honeywell would be considered "bellwether" stocks, meaning they often move in lockstep with the American economy or pace of global growth. During this timeframe, however, they've actually outrun these indicators, in large part due to their well-managed conglomerate portfolio. Each has exposure to a broad spectrum of industries (GE, for example, is really a mix of seven distinct operations), which provides some diversification while also allowing for overlap across each of the businesses.

Striking the right balance between strategic diversification and the opposite -- what some refer to as "diworsification" -- isn't easy, however. As GE's CEO Jeff Immelt has noted, his company's majority stake in NBCUniversal made for what amounted to an awkward and unnecessary marriage.

But GE fully parted ways with NBCU last year as part of efforts to streamline its portfolio and focus on core industrial operations. GE plans to part ways with another loosely related segment, GE Capital's consumer finance business, in the next few months, a spin-off that's expected to unlock additional value for investors and remove a nonessential part of GE Capital from the rest of the business.

In a similar fashion, both GE and Honeywell have assembled a broad array of industrial businesses that fit their long-term goals and translate into a more highly valued enterprise for shareholders. It's an ongoing process that's never quite complete, but one that translates to steadier returns for shareholders on a regular basis.

The latest quarterly results serve as a case in point, as both GE and Honeywell posted earnings last week that were characterized by widely divergent segment growth rates that amounted to a healthy combined profit. Take a look at Honeywell's year-over-year segment profits for the quarter-ending March 31: 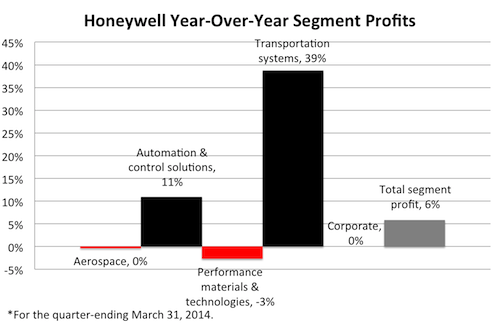 And GE's industrial segment profits for the exact same period: 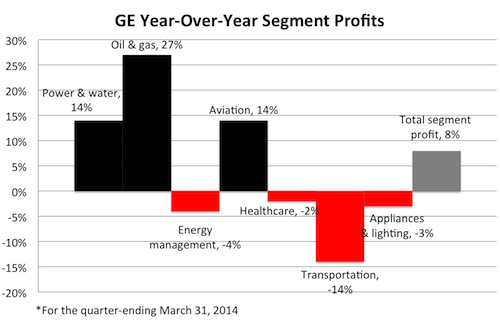 Their respective profit increases of 6% and 8% overall show how both companies are benefiting from a wide breadth of operations. To make the analogy to a well-diversified farm, for example, both Honeywell and GE are planting seeds at different times in different businesses and reaping higher yields consistently using this approach.

In short, GE and Honeywell are taking a page from Berkshire's book, but adding a slightly different twist by isolating their bets in industries that share greater overlap than those in Buffett's conglomerate. GE, at the end of the day, isn't an energy company, but its results were definitely bolstered by the frenzy of activity in that sector. Likewise, Honeywell is better described as an aircraft supplier than an auto parts company, but it witnessed tremendous gains in the first quarter from its automotive turbocharger business.

Foolish takeaway
Going forward, this balancing act will continue at GE and Honeywell, as each is working to dispose of low-margin or second-tier businesses and replace them with high-margin, best-in-class operations. The perfect portfolio will never be completely intact, but operating results should stabilize nicely due to the overlap and offset created through a sound diversification strategy.

Back in 1967, Warren Buffett described the benefits of this approach after steering Berkshire into multiple industries, including insurance and textiles:

We expect that there will be years in the future when the order of relative profitability is reversed, reflecting different stages in both the insurance and textile cycles. However, we believe it is an added factor of strength to have these two unrelated sources of earnings rather than to be solely exposed to the conditions of one industry, as heretofore.

In the case of GE and Honeywell, that "factor of strength" was illustrated during the first quarter. Shareholders can rest assured that both companies delivered better results because of their diversification, not in spite of it.