Baxter International (NYSE:BAX) has built a significant leadership position in hemophilia that the company hopes to unlock next year, when it splits its biopharma business from its medical device business.

The move follows a similarly successful spin-off at Abbott Labs (NYSE:ABT) in 2013 that created AbbVie (NYSE:ABBV), a biopharma company with a significant presence in autoimmune disease.

Given Baxter's planned break-up next year, investors should be pleased to see Baxter enjoyed growth across both of its soon-to-be-separate businesses. Since shareholders are going to need to consider each of these businesses individually, let's take a closer look at the first quarter results. 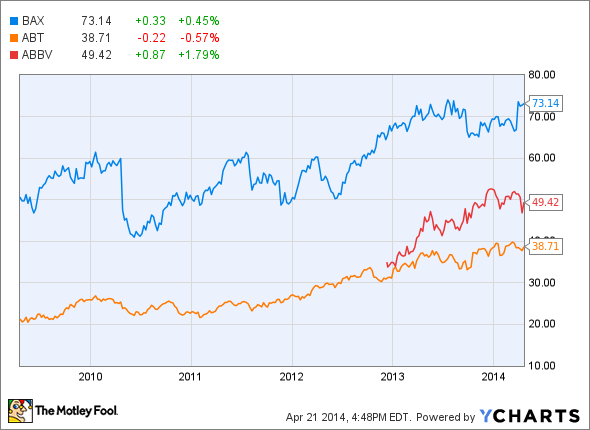 The sum is less than the parts
Two years ago nutrition, device, and drug giant Abbott realized that its slow growth businesses were keeping growth investors from rewarding its high growth drug business.

As a result, Abbott embarked on an aggressive plan to separate the two units into two distinct businesses. Abbott's legacy business would hold onto its Similac and Ensure products, as well as its diagnostics and vascular devices; while the newly created AbbVie would get its pharmaceutical lineup, including its multi-billion mega blockbuster Humira, a drug used to treat rheumatoid arthritis and psoriasis.

Abbott completed the separation in January 2013, and by most measures it's been a success. Shares in AbbVie have climbed 48% since the spin-off, while shares in Abbott have gained 28% thanks in part to strength in its optical product line.

Baxter, perhaps encouraged by Abbott's success, has similarly decided that its slow growing device business is causing investors to undervalue its growing drug franchise. As a result, Baxter plans to create a new, as-yet-unnamed company for its top selling hemophilia A and hemophilia B treatments.

Regardless of whether a patient inherits the A or B type of hemophilia, cases of prolonged bleeding and internal bleeding can damage joints, and risks of severe complications from injury require either on-demand or prophylactic replacement therapy, which provides the missing factor proteins via infusion.

Last quarter, sales of Baxter's hemophilia medications grew 9% from a year ago to $827 million, which helped lift Baxter's BioScience segment sales by 6% to $1.6 billion. Sales of hemophilia treatments were strongest overseas, with sales jumping 12% to $486 million.

While Baxter is a leader in hemophilia treatment, its BioScience segment also includes Baxter's BioTherapeutics products. BioTherapeutics sales were essentially unchanged at $502 million last quarter, as 7% growth in the U.S. was more than offset by an 18% drop overseas.

Baxter also saw growth in the company's BioSurgery lineup, with sales ticking up 3% to $176 million year over year, and in its vaccines business, which grew 25% to $103 million. That spike in vaccine revenue was entirely thanks to accelerated government milestone payments tied to Baxter's flu vaccine development programs.

The biopharma firm will have nearly $6 billion in sales, 50% of which are generated outside the United States. Baxter believes that there's substantial opportunity for the biopharma business, since hematology and biotherapeutics markets are expected to grow 10% and 8% annually through 2017, respectively.

A growing dialysis business
While investors in Baxter's future biopharma business will benefit from the company's focus on hemophilia treatment, Baxter's device business opportunity is tied to kidney disease.

Last year, Baxter acquired Gambro, a Swedish dialysis products company that expands Baxter's global dialysis footprint. The deal added $400 million in sales to Baxter's renal business last quarter -- bringing total renal sales to nearly $1 billion -- and provides cross-selling opportunities for Baxter, particularly in the EU, where Gambro is heavily represented. Over the next three years, Baxter expects it will be able to cut $300 million in overlapping costs from the combined company.

Sales of fluid systems increased 3% to $757 million, and specialty pharmaceuticals products were up 2% to $367 million. BioPharma device sales totaled $228 million, up 4%.

Across all of those units, annual sales at the future device business, which will retain the Baxter name, totaled $9.4 billion, 60% of which is produced outside America. Baxter expects that 6% compounded annual growth for its dialysis business will help drive results for the devices company through 2017.

Fool-worthy final thoughts
Baxter is working on a number of intriguing therapies and products, including BAX 111 for von Willebrand disease, which Baxter expects to file with the FDA for approval this year. Additionally, Baxter has an ongoing study for its Advate hemophilia therapy showing that prophylatic use of the drug significantly reduces bleeding episodes in hemophilia A patients. And Baxter also has hemophilia treatment BAX 817 in phase 3 trials, which it hopes to file for approval in 2015. If so, BAX 817 will compete in a market valued at $1.7 billion.

Those future products should help support investor interest in Baxter, particularly given Baxter's solid earnings performance. Earnings per share totaled $1.19 in the quarter, nicely above the company's previous guidance for $1.06 to $1.09. That supports Baxter's full-year guidance for 9% to 10% revenue growth and EPS of $5.05 to $5.25 per share.

While the focus on hemophilia and kidney disease provides plenty of reason for investors to consider Baxter, the majority of investors will probably be most attracted by the potential from the spin-off. Shares in both AbbVie and Abbott have climbed nicely since they separated, and that may suggest that Baxter's planned break may be similarly rewarding.