Gilead's (NASDAQ:GILD) investors were wondering how long it would take for the company's newly launched hepatitis C drug Sovaldi to become a blockbuster; investors found out this week that the answer was less than one quarter.

Sovaldi's sales totaled $2.3 billion in the first quarter as patients previously warehoused by doctors clamored for the new cure. While Sovaldi's sales are impressive, it wasn't the only bright spot in Gilead's earnings. The company posted solid results from its HIV drug franchise, too. So let's take a closer look at Gilead's quarter and see whether the recent slide in its shares was justified. 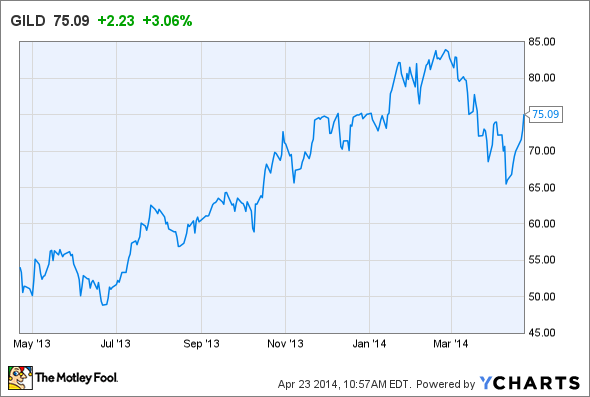 Unleashing pent-up demand
Sovaldi's potential has been widely hyped since Gilead acquired the drug in its $11 billion acquisition of Pharmasset in 2012. Today, questions surrounding whether Pharmasset's price tag was too high are muted following record-breaking results.

In the compound's first full quarter on the market, Sovaldi's sales eclipsed $2.2 billion, putting it on an annualized pace that may threaten AbbVie's Humira as the best-selling drug in the world. That first-quarter performance handily outpaced results for Johnson & Johnson's (NYSE:JNJ) Olysio, which was approved by the FDA for hepatitis C a week before Sovaldi.

Last week, Johnson reported that Olysio's sales exceeded expectations. Olysio's sales totaled $350 million in the first quarter as the drug was increasingly dosed alongside, rather than instead of, Sovaldi. Olysio's strong first-quarter performance was likely tied to recommendations from the American Association for the Study of Liver Diseases, or AASLD. Those guidelines call for the off-label use of Olysio and Sovaldi for 12 weeks in genotype 1 patients who can't tolerate interferon.

The reason Sovaldi significantly outpaced Olysio during the quarter stems from Sovaldi's better efficacy in clinical trials and reduced side effects. Those trials showed that Sovaldi outperformed the prior standard of care: a side-effect laden combination of ribavirin and peg-interferon.

Those two drugs, which cost payers roughly $20,000 for a treatment course, offered lackluster cure rates, and required dosing during as many as 48 weeks. As a result, hepatitis C remained a tough-to-treat disease that often led to liver failure.

Today, Sovaldi is ushering in a new wave of treatments that can cast aside interferon -- and, in some cases, ribavirin. Sovaldi's 90%-plus cure rates and 12-week-oral, rather than injection, dosing marks a substantial shift in how doctors, and patients, view the disease.

As a result, roughly 30,000 patients started receiving Sovaldi in the first quarter, 70% of whom are diagnosed with the most common variation found in the U.S., genotype 1. That led to the aforementioned Sovaldi sales of $2.3 billion. Sovaldi's sales in Europe, where it won approval early in the first quarter, totaled $164 million.

Ongoing dominance in HIV
Thanks to the recently launched HIV treatment Stribild, a combination of Gilead's Vitekta, Tybost, Viread, and Emtriva in one pill, and Complera, which combines Gilead's Truvada and Johnson & Johnson's Edurant, Gilead's HIV drug revenue jumped in the first quarter.

Gilead sold $204 million of Stribild, approved by the FDA late in 2012, in the fourth quarter. That momentum carried over in the first quarter as Stribild's sales jumped 134% year over year, to $215 million. That makes Stribild the most prescribed HIV medication in U.S. HIV-naive patients, and the third most commonly prescribed treatment across all U.S. HIV patients.

Complera sales also posted robust year-over-year growth during the quarter. Complera's sales grew 69% from a year ago to $251 million, making Complera the second-most-prescribed HIV drug, and putting it on pace to possibly hit billion dollar blockbuster status this year.

Translating sales into profit
The combination of Sovaldi and higher HIV product sales led to a significant lift in Gilead's earnings. Adjusted earnings per share roughly tripled from a year ago, to $1.48 in the first quarter as sales nearly doubled to just shy of $5 billion.

Profit growth was driven in part by improving margin. Gross margin expanded from 74.5% last year to 87.4% in the first quarter thanks to ramping Sovaldi sales, and a shift toward newer, more margin-friendly HIV therapies. That led to operating margin rising 50% to 66.6%.

As a result, operating cash flow more than doubled to $1.6 billion in the quarter. That helped the company reduce its outstanding debt from $9.9 billion last year to $6.7 billion, and fueled the repurchase of more than 5.7 million of its shares during the first quarter.

Gilead has also filed for approval in Japan, which has a significant population of hepatitis C patients. Once approved there, sales should see another pop higher. Given 75% of Gilead's sales come from the U.S. and just 5% comes from outside the U.S. and Europe, there remains an opportunity to grow Gilead's franchise in emerging markets, too.

Thanks to Gilead's cash climbing from $2.6 billion to $6.8 billion in the past year, the company has plenty of room to advance its promising cancer drug, idelalisib, to market, assuming it wins FDA approval this fall.

That, coupled with an expected decision on Gilead's Sovaldi and ledipasvir combination treatment for hepatitis C, suggests there may be plenty of market-moving news for the company this year.