The world's second-largest automaker, Volkswagen (OTC:VWAGY), has announced that it could sell an unprecedented 10 million plus units in 2014 -- four years ahead of schedule. The turnaround in Europe is obviously a big part of the carmaker's plans, but it's clear that if the automaker wants to maintain its growth momentum then it has to scour the globe for new markets. Industry sources say that Volkswagen may have applied for setting up its first factory in the Southeast Asian country of Thailand. Let's zero in.

From a long-term perspective, there's little doubt about Thailand's prospects. The country produces nearly 2.5 million vehicles annually, and is often referred to as the "Detroit of the East." Thai consumers are switching from two wheelers to four wheelers, and there is a growing demand for fuel-efficient cars due to strict government norms.

Thailand's cheap labor, quality advantages, and an established supply chain make manufacturing inexpensive fuel-efficient models that could be sold regionally, and also exported to other countries, lucrative. The automobile industry presently accounts for 12% of the country's GDP. 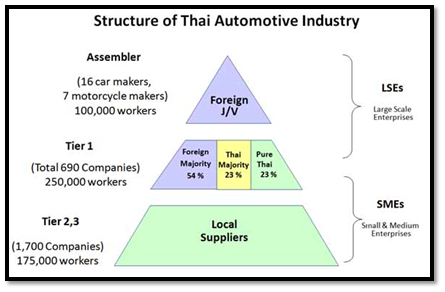 Albeit late, the Western world has woken up to Thailand's prospects; Volkswagen's entry was just a matter of time. However, the Thai auto industry is faced with some near-term headwinds.

The dual effect of a political unrest that broke out in November 2013 and a fall in demand following the withdrawal of a rebate to first-time car buyers has slumped sales figures for most auto players. Toyota, the country's largest auto seller, could report 10% sales decline in Thailand in fiscal 2014 that ended in March. The company has plans to add 200,000-unit capacity over the next three-four years, but has already warned of a rethink if things don't improve. IHS Automotive estimates domestic auto sales to fall by 19% this year to 1.08 million cars because of the political unrest.

In Volkswagen's context, while it's clear why the company is entering Thailand, the question is why now? Here are two reasons.

1. Growing a presence in Southeast Asia as a whole
Let's first look at the market dynamics that the German auto giant witnessed in 2013.

Asia-Pacific clearly stands out in terms of market share gains. While the improvement is largely due to China, where the company sales grew by 16% to 3.27 million units and emerged as the top foreign car seller, the numbers also show that it's becoming difficult to increase share in matured markets. Thus, Volkswagen needs to capture untapped markets where its present sales volumes are much smaller than China or even the U.S.

In this context, Southeast Asia becomes strategically important. Juergen Pieper, an analyst at Bankhaus Metzler, Frankfurt, told Bloomberg that Southeast Asia is "one of the regions where Japanese carmakers are significantly ahead of VW, so there's room for growth." Thailand has free trade agreements with all the ASEAN members -- Brunei, Indonesia, Malaysia, Philippines, Singapore, Vietnam, Laos, Myanmar, and Cambodia -- which makes it an excellent base for carving a presence in Southeast Asia.

According to a Bloomberg report, Volkswagen expects consolidated industrywide sales growth of approximately 4.5% every year till 2018 in Indonesia, Thailand, Malaysia, Philippines and other smaller countries. That's reason enough for the German auto giant to tap in, but there's more.

2. Tax breaks
The Thai government has launched a scheme where it will offer tax exemptions to automakers that invest 6.5 billion baht ($200 million) or more to car manufacturing in the country. To get the exemption, automakers will need to begin manufacturing by 2019 and make at least 100,000 cars annually within four years of starting operations. The last date for application was March 31.

Though Volkswagen hasn't disclosed its plans yet, it's not farfetched to think that it wants to take advantage of this tax break. The government's expectations are highly manageable from the company's point of view as it was sitting on a cash pile of 22 billion euros ($30.4 billion at current exchange rates) at the end of 2013, and its manufacturing processes and capabilities are among the world's best. It has more than 100 factories around the world.

Incentives like these in a growth market are just too good to overlook.

The bigger picture
Despite worries about Thailand's immediate turmoil, it makes good business sense for Volkswagen to enter Thailand now and take advantage of tax exemptions. There is enough steam in the country's export market, and the huge potential of the ASEAN countries is open for exploration.

How Does Thailand Fit Into Volkswagen’s Plans? @themotleyfool #stocks $VWAGY Next Article
Current