It feels like years since Apple (NASDAQ:AAPL) has had a really solid earnings report. Apple has been dogged by investor pessimism for what feels like an eternity, but is realistically about 18 months. Well, the Mac maker just showed that it can still put up strong results with the best of them. We've got a lot to cover.

Let's get the pesky headline figures out of the way. Revenue came in at $45.6 billion, which turned into $10.2 billion in net income. Thanks in part to the highly accretive buyback program currently being executed, we're talking about $11.62 per share in profit.

Bring it home, iPhone
The real star of the show was iPhone unit sales. Apple sold 43.7 million iPhones during the quarter, which is an utter blowout. The Street would have been perfectly happy with just 38 million iPhones. The China Mobile partnership is already starting to pay off, but there was plenty of iPhone strength beyond the world's largest carrier.

The iPhone outperformance was broad-based, but the iPhone 4s is faring quite well in emerging markets. That's important because prepaid markets have historically been tougher for Apple to crack with its premium gadgets, but it still sells the 3-year-old 4s at lower price points.

It's also worth noting that the majority of iPhone buyers in the mid-range are new to the platform. According to Tim Cook, 85% of 4s buyers and 69% of 5c buyers are first-time iPhone buyers, and it's common knowledge that Apple enjoys the highest customer loyalty in the industry. Furthermore, over 60% of those customers were switching from Android.

Not so bad, iPad
iPad sales came in admittedly light relative to expectations at 16.4 million. In fact, this is only the second time in the iPad's history that it posted a year-over-year decline in unit sales. Tim Cook acknowledged this and attributed it primarily to changes in channel inventory. Last year, iPad channel inventory was significantly increased, but this year it decreased.

Also, iPad mini supply was constrained when it first launched in 2012, and many of those sales were pushed out into the March quarter of 2013. The 2013 iPad launch had a better supply situation, so many of those sales were already recognized in the December quarter. On a sell-through basis, iPad sales were only down 3%, which is more approachable than the reported 16% decline on a sell-in basis.

Unsurprisingly, iPod unit sales were absolutely decimated, falling 51% to just 2.8 million. The iPod has long been in decline, and now comprises just 1.6% of trailing-12-month revenue. Those recent rumors that no iPod updates are coming this year are starting to get some legs, and those same rumors say that the iWatch could effectively replace the iPod lineup. 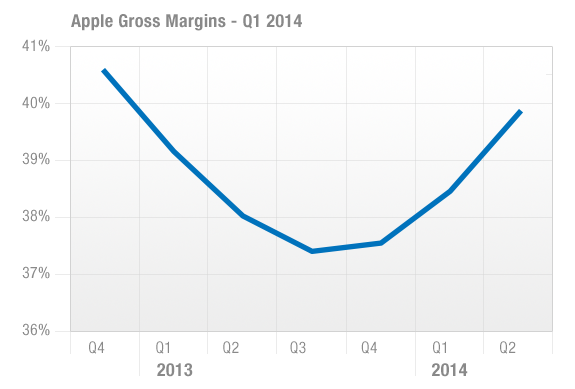 Incoming CFO Luca Maestri attributed this to better-than-expected costs and improved product mix. That iPhone beat also helped too, since iPhones are among Apple's most profitable products.

Throughout 2013, investors fretted about Apple's declining margins, which were falling from "incredible" to just plain "great." Margins have not only stabilized, but are now trending higher after overcoming some of the deferral impacts from giving away free stuff. 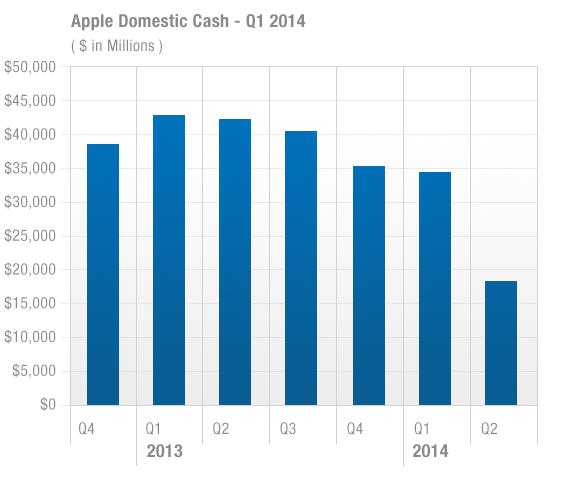 To that end, Maestri confirmed that Apple would in fact be tapping the debt markets again in the near future. The amount will be "similar" to the $17 billion that Apple issued last year. Of course, the main reason why Apple will need more domestic cash is because it is further boosting its capital return program by an additional $30 billion.

Apple gives more cash
The new program tops out at $130 billion, and is still expected to be completed by the end of 2015. The share repurchase authorization component increases from $60 billion to $90 billion. Through March, Apple had already completed 75% of the $60 billion authorization with seven quarters to go (Apple repurchased a mind-boggling $18 billion in stock during this quarter alone), so the company had to increase the total since management still believes Apple shares are undervalued at current prices. On top of that, the dividend payout will jump by 8% to $3.29.

Some investors have been asking for an Apple stock split, and they just got their wish. Apple will be doing a 7-1 split in June. Based on current prices, that will bring the share price down to around $80. While stock splits are mathematical nonevents, they do have some practical implications.

First, the lower price makes Apple shares more accessible to individual investors, and that perceived affordability could broaden the investor base. Second, the whole discussion of Apple becoming a Dow component can now resume in full force. Historically, Apple's high share price has kept it out of the price-weighted index, since it would disproportionately affect the Dow's price swings. Now, Apple's possible inclusion in the Dow is back on the table. If added, index funds will all be obligated to buy in.

$90 billion says Apple is cheap
Overall, this was one of the best earnings reports that Apple has released in recent memory. The soft spots weren't that bad (and were easily explainable), and the strong parts will reinforce the business for years to come. Apple's hyper-growth days may be over considering the size of its current revenue base ... but Apple has been priced for value for years.

Tim Cook still thinks Apple is undervalued (and is putting $90 billion behind that notion). Do you?