In an attempt to make its megamerger more palatable to U.S. antitrust regulators, ConAgra (NYSE:CAG) announced a Japanese company will buy four flour milling operations currently owned by the merger partners. While the resulting combined entity will still be massive in scope, it may be enough to get the Justice Department to sign off on the deal.

The merger was originally announced in March 2013 and was expected to have closed late last year, but regulators have moved slowly with their review and the closing date has been pushed back several times. By shedding the mills, the partners hope to grease the skids enough to move the plan toward approval.

It's a three-way project with the agricultural products company joining with Horizon Milling, a joint venture between privately held Cargill and agricultural cooperative CHS (NASDAQ:CHSCP). The new company to be called Ardent Mills would have pro forma sales of $4.3 billion from 44 flour mills, three bakery mix plants, and a specialty bakery facility, spread out across the U.S., Canada, and Puerto Rico. It would also give it massive control over the market.

CHS is the country's biggest miller with an 18% share of the market, followed by Archer-Daniels Midland (NYSE:ADM)with a 17% share and Cargill at 16%. Because it would concentrate milling operations across most of the west, opponents fear wheat farmers would be paid less for their grain while consumers would pay more for baked goods. Ardent Mills would own more than a third of the market and would actually end up being five times bigger than the third- and fourth-largest flour milling companies.

That's where the sale of the four milling operations comes in, because their purchase creates a potent competitor of substantial size all its own.

The U.S. subsidiary of Japan's Nisshin Flour Milling will buy assets in California, Texas, and Minnesota for $215 million that will add 62,500 cwts of daily milling capacity (cwts is a unit of measure called a hundredweight that equals 100 pounds) for a total of approximately 100,000 cwts. While that would make it the fourth-largest milling operation in the country, it would still be far less than the 513,000 cwts or so capacity Ardent Mills would possess. Horizon operates 21 U.S. and Canadian flour mills with combined daily flour milling capacity of 321,000 cwts while ConAgra has 23 U.S. flour mills and 255,100 cwts in daily flour milling capacity. 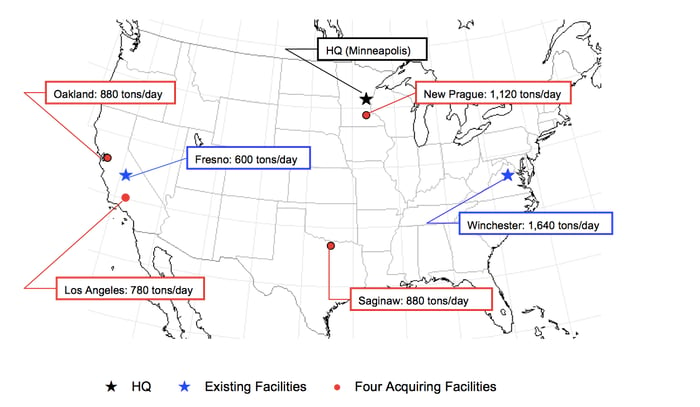 When all is said and done, Miller Milling will only trail Ardent Mills, ADM, and a third entity that will be created when a separate company, Milner Milling, acquires Cereal Food Processors, a deal announced in March, but whose completion is still pending.

It's obvious the U.S. milling industry is in the midst of a major consolidation wave, one that's concentrating greater numbers of mills into the hands of fewer corporate giants. Yet Ardent Mills will still be twice as large as its nearest rival, one reason I believe Archer-Daniels Midland will be the biggest loser if the deal is approved.

The oligopoly controlling the market makes any future consolidation attempts will be that much harder to complete and will come at a higher price. ConAgra, which will have a 44% stake in the new business, will have significant heft to throw its weight around and may give it the market muscle for its stock to regain its strength.