Microsoft (NASDAQ:MSFT) recently announced its Xbox Originals initiative, which will launch original programming on Xbox One, Xbox 360, and other Microsoft devices this June.

Microsoft is obviously trying to squeeze into a very crowded market. First and foremost, Microsoft will pit itself against Netflix (NASDAQ:NFLX), which has a distant head start in original programming. Last month, Sony (NYSE:SNE) also announced its first original PS4 show, Marvel's Powers. Finally, Microsoft will also have to fend off Amazon (NASDAQ:AMZN), which will launch six original series to complement its recent launch of the Fire TV set-top box.

Armed to the teeth
To contend with these rivals, Microsoft is bringing a lot of firepower to the battle. Xbox Originals' initial lineup will include a Halo series produced by Steven Spielberg, a Halo digital feature produced by Ridley Scott, a sci-fi drama about AI servants called Humans, and several documentary series about technology.

Xbox Originals will also be the exclusive broadcasting partner for the Bonnaroo Music Festival in June, adding Xbox-exclusive features such as multiple camera views and Skype conferences with the artists.

A Halo TV series is scheduled to arrive on Xbox Originals. Source: Microsoft.

Other Xbox Originals in development include the mixed-genre fantasy Deadlands, the apocalyptic survival series Winterworld, the unscripted show Fearless, the detective thriller Gun Machine, the stop-motion Extraordinary Believers, and an untitled half-hour variety show starring Michael Cera and Sarah Silverman. Series based on Fable, Gears of War, Age of Empires, and Forza Motorsport are also reportedly being considered.

In other words, Microsoft has gone all-in with an ambitious, accelerated schedule, which makes Sony's and Amazon's efforts look timid by comparison.

A bold new experiment in uncertain times
While Microsoft's slate of original shows look promising, the Xbox One is still trailing Sony's PS4 in sales. Since last November, 7.2 million PS4s and 5 million Xbox Ones have been shipped worldwide.

There are two main reasons for that gap -- the Xbox One costs $100 more than the PS4, and it has been launched in fewer markets than the PS4. To boost sales, Microsoft bundled Electronic Arts' (NASDAQ: EA) Titanfall with new consoles for $450, lowering the price of the console itself to $390-$400 to compete with the $399 PS4. Microsoft is also gearing up to launch the Xbox One in China and the rest of Asia later this year.

Since the Xbox One and PS4 are commonly identified as gaming consoles first and media devices second, Microsoft's dedication to unleashing a full schedule of original programs is a huge gamble. Xbox Entertainment Studios President Nancy Tellem acknowledged that fact at the press preview event, stating, "We don't necessarily know what approach will work, and we don't necessarily know what approach won't work."

Ideally, Xbox Originals should offer original programming that interests gamers. A Halo series could be a great start, considering the expanded universe of books, comics, and toys that have already been built around the 13-year-old franchise.

The million-dollar question
However, investors should realize there's a reason that Sony hasn't announced a full slate of original programs like Microsoft -- the huge expenses. For example, the first 13-episode season of Netflix's House of Cards cost a whopping $100 million. Time Warner (NYSE: TWX)/HBO's True Blood costs $5 million per episode, while the premiere episode of Boardwalk Empire cost $20 million. That's a lot of money to invest in a completely untested idea.

Producing a whole slate of new original shows is the antithesis of the traditional business model for gaming consoles, in which a manufacturer simply sells a console at a thin margin or loss and profits by taking a cut of software sales. In that model, most of the risk is shifted toward the game publisher.

For Xbox Originals, Xbox Entertainment Studios will adopt a Netflix-like business model, in which Xbox Live subscription costs hopefully balance out the show budgets. It's unclear if Xbox Originals will be offered for free to Xbox owners, to certain tiers of Xbox Live subscribers, or sold on an individual basis like Apple's (NASDAQ: AAPL) iTunes.

Yet in my opinion, Xbox Originals looks like a straightforward assault on Netflix. Xbox One owners already have to pay $60 per year for an Xbox Live Gold membership to access Netflix, which costs $96 per year. The PS4, Fire TV, and other streaming set-top boxes don't "double bill" their users that way.

Since Netflix could potentially be Xbox Originals' biggest competitor, Microsoft could intentionally be discouraging its use to clear the way for its own original programs. 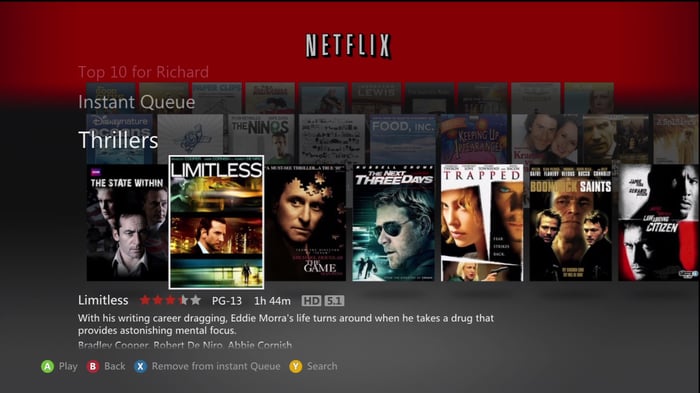 Netflix on Xbox One can cost nearly $160 per year due to double billing. Source: Netflix.

Sony could blow Microsoft out of the water
Sony has only introduced one program so far, but it could expand its lineup of original PS4 programs at much faster rate than Microsoft, thanks to its massive media resources. Sony Pictures Entertainment includes Columbia Pictures, MGM, Screen Gems, and other studios, as well as dozens of TV networks across the world.

Sony could simply pull programming from any of those sources and make its content exclusive to the PS4. This means PS4 gamers might get a sneak peek at the next James Bond film or additional content for the latest Spider-Man film -- offering its users beefy original content that Microsoft could only dream of.

My final take
In conclusion, Microsoft's Xbox Originals strategy is a daring but risky idea. In a worst-case scenario, Xbox One sales would stall out, throttling revenue from Xbox Live memberships. That would cause Xbox Originals' business model of exclusive programming to be unsustainable, and the idea would quickly fade away.

In a best-case scenario, quality Xbox Originals shows could generate positive buzz and convince non-gamers to purchase the Xbox One. That would lead to more Xbox Live subscriptions, which would translate into higher budgets for original programs. That positive feedback loop could turn Xbox Entertainment Studios into a mini-Netflix -- a nice future considering that Netflix's earnings popped 1,875% year-over-year last quarter while its revenue rose 24%.

So what do you think, dear readers? Is the Xbox Originals channel a desperate or clever strategy for Microsoft to evolve into a streaming video company? Share your thoughts in the comments section below!