As a franchise, Planet of the Apes has come a long way in the 51 years since French novelist Pierre Boulle introduced us to a world in which apes emerge as the dominant species.

This summer brings another adaptation of his work, July's Dawn of the Planet of the Apes. When the receipts are counted and expenses paid, I expect it to be the summer season's top net earner.

Hail Caesar!
Produced by Chernin Entertainment and distributed by Twenty-First Century Fox (NASDAQ:FOXA), this movie isn't so reminiscent of Boulle's novel as it is a sequel to 2011's Rise of the Planet of the Apes. In that movie, the effects of a brain-enhancing formula are passed on to orphaned chimpanzee Caesar, who, in turn, gives rise to an entire species of sentient simians. 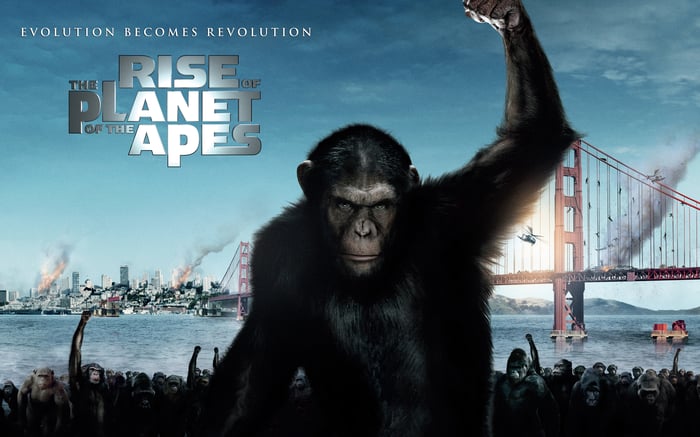 Andy Serkis brings the intelligent ape Caesar to life in Rise of the Planet of the Apes. He'll reprise the role in this summer's sequel. Credit: Twenty-First Century Fox.

Rotten Tomatoes says 82% of critics and 77% of fans liked Rise of the Planet of the Apes. The movie also earned an A- CinemaScore on the way to $176.8 million in U.S. grosses and $481.8 million worldwide, Box Office Mojo reports. By contrast, X-Men: First Class ended its 2011 theater run with just $353.6 million at the global gate.

Let's put those numbers in context. Box Office Mojo puts Rise's production budget at a mere $93 million. BoxOffice.com adds another $47 million for marketing and distribution. Figuring Chernin and Fox shared half the gate with theater owners, that leaves $240.9 million in receipts versus just $140 million in expenses. Mix in another $71 million from DVD and Blu-ray sales as tracked by The-Numbers.com and you've got one of the great profit stories in recent Hollywood history.

Overshadowed by superheroes
So how is it that Dawn of the Planet of the Apes isn't enjoying more buzz heading into the summer movie season? Early success for Marvel's Captain America: The Winter Soldier may be a contributing factor. I'd also point to big marketing pushes for The Amazing Spider-Man 2, Fox's X-Men: Days of Future Past, and Legendary's own sci-fi monster flick, Godzilla.

And yet, all of these films trail Dawn of the Planet of the Apes in one key area: economy. Chernin is making the sequel for a reported $120 million versus $160 million for Godzilla, $170 million for Winter Soldier, an estimated $250 million for The Amazing Spider-Man 2, and a Fort Knox-sized fortune for X-Men: Days of Future Past.

Nor is Dawn of the Planet of the Apes spending on a chest-thumping marketing campaign the way its summer rivals are, choosing instead to release posters and video via social media and YouTube while enticing comic book fans with a short graphic novel at the film's website.

History says that's a smart strategy. Audiences came out for Rise because it was a well-made movie. Judging by the footage we've seen so far, I think Dawn of the Planet of the Apes will attract theatergoers for the same reason. And Cherin, along with Fox investors, will be better off for it.

Now it's your turn to weigh in. Watch the new trailer below and then leave a comment to let us know whether you think Dawn of the Planet of the Apes will be one of the summer season's most profitable movies.

Dawn of the Planet of the Apes opens on July 11 in U.S. theaters. Sources: Twenty-First Century Fox, YouTube.