No more minivans: The Dodge brand is being retooled around high performance vehicles like this 2015 Challenger R/T. Source: Fiat Chrysler.

This is a big deal. Newly merged FCA's global product portfolio is currently a messy mash-up, with many areas of overlap -- and several important market segments where the company has no strong offerings at present.

This plan is CEO Sergio Marchionne's road map for changing that. If it's successful. FCA will be transformed into a thriving, competitive, substantially more profitable global automaker.

But that's a big "if." The plan is ambitious and expensive, and FCA is not exactly rolling in cash at the moment. There are reasons to be optimistic, though, starting with this: Marchionne's last five-year plan was also seen as overly ambitious -- but Fiat and Chrysler largely delivered on its goals.

I outlined the whole plan last weekend and summed up how it will affect each of FCA's brands. This week, I'm going into more detail on FCA's plans for each of its brands, taking a closer look at the products, strategies, and expansions that the company plans to put in place over the next five years.

On Monday, I talked about FCA's plan to take Jeep to new markets around the world. Today's entry will cover FCA's surprising plans for its longtime mainstream U.S. brand, Dodge.

A bold, brash, Hemi-powered makeover for Dodge
This is where FCA's five-year plan got really interesting -- or really confusing.

Not long after we heard from Chrysler chief Al Gardner that his brand had won the "internal turf war" for the right to be FCA's mainstream U.S. brand, we heard from Dodge chief Tim Kuniskis that a slew of new Dodge models are on the way -- and several of those models seem to overlap with Chrysler's planned offerings.

That's a big change from the family friendly Neons, Intrepids, and minivans that were the heart of the Dodge brand not so long ago. But there's a sound business reason behind it.

The cold hard reasoning behind Dodge's hot new attitude
We got a hint of Dodge's new attitude last month, when Kuniskis revealed the refreshed Dodge Charger and Challenger at the New York International Auto Show. I was there, and I was struck by how Kuniskis embraced the term "muscle cars," almost as if he saw the idea as the heart of the Dodge brand.

Why? Demographics. This slide from Kuniskis' presentation says it all:

Can your fuel-sipping import-brand sedan do that? Dodge's Charger can. Source: Fiat Chrysler.

Reaching younger buyers is the Holy Grail of automakers' marketing ambitions. As a group, young adult Americans are far less interested in cars than their parents and grandparents were at the same age.

That trend has automakers worried. Companies like Ford and General Motors (NYSE:GM) have emphasized technology and connectivity in their entry-level models in an effort to get the attention of twenty-something consumers.

FCA is doing that, too. But it seems to think it might have found another way to young car buyers' hearts.

Kuniskis argued that cars have "become commoditized" and "America's drivers have been abandoned" by bland offerings, something he blames on import brands. As he sees it, there's an opportunity for an American brand focused on performance to gain ground with those much-desired younger buyers.

And so the Dodge brand is being retooled to attract more of those buyers.

The details on FCA's plan for Dodge
Here's how FCA plans to rework Dodge's product portfolio over the next five years.

We already knew that the Challenger and Charger are being refreshed for 2015. But as you can see, several current Dodge stalwarts aren't part of the future plan. Production of the midsize Avenger has already ended, and the Grand Caravan minivan will expire in 2016. The compact Dart and midsize Journey crossover will stick around, but they'll be revised in 2016 to "better align with Dodge brand DNA," Kuniskis said.

What does that mean? Here's what we know: The Journey will be replaced in 2016 with an all-new crossover that will share a platform with the Dart. Both it and the Dart will see turbocharged engines offered, as well as new higher-performance "SRT" variants that will have all-wheel drive and more powerful turbo engines.

The mighty Dodge Viper sports car, briefly rebranded as an "SRT" product, will return to the Dodge brand portfolio under the new plan. Source: Fiat Chrysler.

Meanwhile, the high-end Viper sports car is coming back to Dodge. (FCA is doing away with the separate SRT brand it established a couple of years ago. "SRT" will once again become a high-performance designation under the umbrella of FCA's U.S. brands.)

And if you look way over on the right hand side of the chart, you'll see a "B Sedan/Hatch" coming for 2018. "B" means subcompact, but we don't know anything more about that new Dodge yet.

One more interesting note: FCA isn't expecting Dodge to contribute to its five-year sales growth. Nor is there any hint that FCA plans to expand the brand beyond North America. 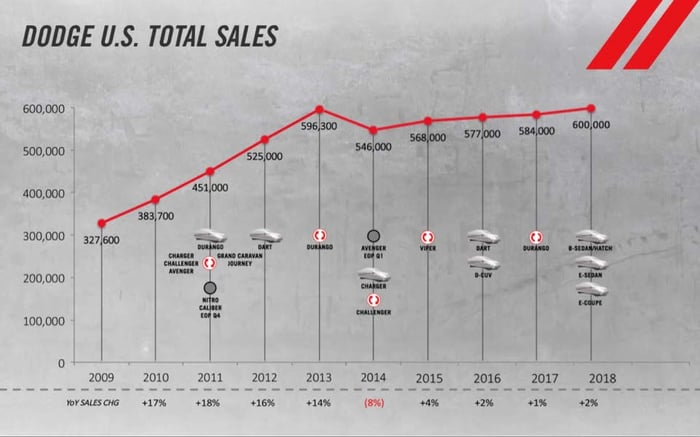 (By the way, it says "E Sedan" and "E Coupe" way over on the right; those are the next-generation all-new Dodge Charger and Challenger, which are due in mid-2018 as 2019 models.)

So, will this work?
Tire smoke and roaring Hemis make for fun presentations. But beyond the brash, macho muscle cars, there's an intriguing bet being made here.

FCA could easily have added Dodge to the list of defunct American car brands and put all of its chips on Chrysler and Ram in the U.S. market. Instead, it's betting that with a shift in emphasis, Dodge can find a place as a profitable niche brand that captures more young buyers.

Twenty years ago, Dodge sold an awful lot of minivans and sedans. But Dodge's fortunes waned as consumers moved on from minivans, preferring crossover SUVs instead.

Now, Dodge is reaching back to its muscle-car heritage -- and bringing that vibe to an overhauled lineup that will emphasize performance while (mostly) offering practical value as well.

Will it work? I think FCA has a good chance of hitting its five-year goals for Dodge -- if the products deliver on the high-performance promise while also delivering the quality and practicality needed to compete with mainstream alternatives. We'll find out.