The days of mega mergers in the energy sector appear to be over for now. The companies that wanted a position in America's shale revolution have largely secured that position. Instead, what we are seeing is a lot of portfolio trimming as non-core assets are being unloaded to fund drilling at faster-growth shale plays. It's a trend that actually plays right into the hand of one subsector of the energy segment, oil and gas MLPs.

In the past month alone, there have been three notable deals within the oil and gas MLP sector. Earlier this month, Memorial Production Partners (NASDAQ: MEMP) spent $935 million to buy oil producing properties in Wyoming. That was followed by a game-changing strategic alliance signed by Legacy Reserves (NASDAQ:LGCY). That deal included $355 million in cash and another $350 million in Incentive Distribution Units. It was Legacy Reserves' second deal this year as the company spent $112 million in March to buy some legacy oil reserves in Montana and New Mexico. Finally, last week also featured a $422 million oil deal from Atlas Resources Partners (NYSE: ARP).

For the most part, these deals were fairly similar. Three of those four deals, as well as several others from the past year, were for low-decline oil properties, where carbon dioxide is being used to enhance the recovery of the oil that's still trapped in these mature oil fields. The bulk of the rest of the deals that have been completed over the past year that have involved oil and gas MLPs are for low-decline natural gas assets. These low-decline assets didn't provide a lot of growth for the previous owner; however, the assets do fuel important growth for the new owner. Legacy Reserves' deal, for example, provided a big boost to the company's asset base, as seen in the following slide. 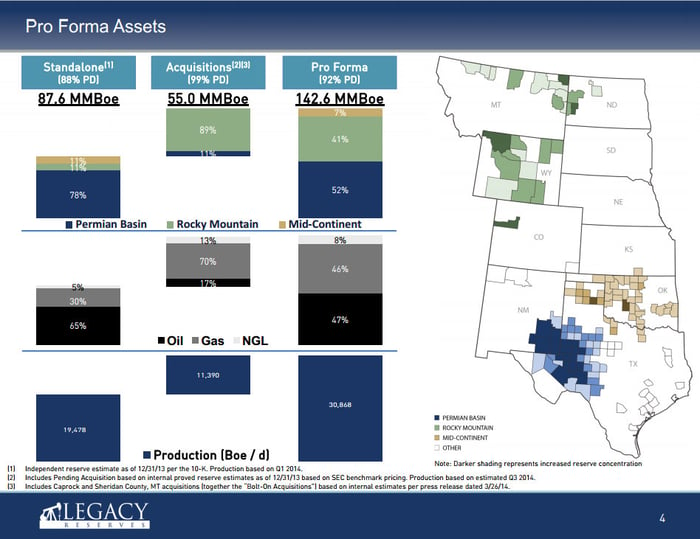 Needle-moving acquisitions like that are the key to fueling growing distributions to the unit holders of these MLPs. In fact, in each of the three most recent deals, the MLP buyer noted in the press release announcing the deal that it would be accretive to distributable cash flow, which is critical to growing the payout. Legacy Reserves, for example, noted that it expected its latest deal would yield, "significant short-term and long-term accretion to unitholders." While none of the buyers announced distribution increases along with the deal, the likelihood is that those announcements would be coming at some point this year.

History of distribution increases
These are statements backed up by a history where making deals has fueled distribution increases. Legacy Reserves, for example, has completed more than 119 deals since 2006 totaling more than $1.6 billion. Those deals provided Legacy Reserves with the fuel it needed to boost its payout for 14 straight quarters. That's a trend not likely to end thanks to the deals it has completed so far this year.

Meanwhile, Memorial Production Partners has been just as active in acquiring new assets. As the following slide shows, the company has completed 11 deals since going public in 2011, totaling more than $2.4 billion dollars. 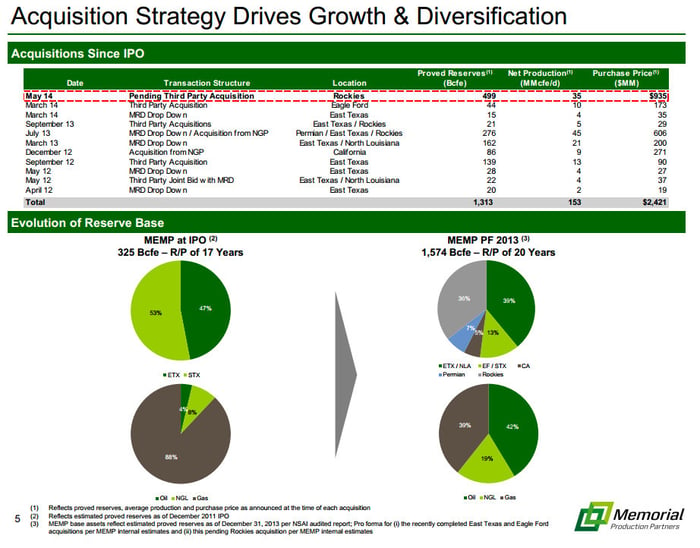 Over that same time frame, the company has raised its payout from $0.48 per unit to the present rate of $0.55 per unit. It's a payout rate that's likely going higher as the company's latest deal has the potential to push its expected distribution coverage ratio to a very strong 1.20 times by the end of this year. 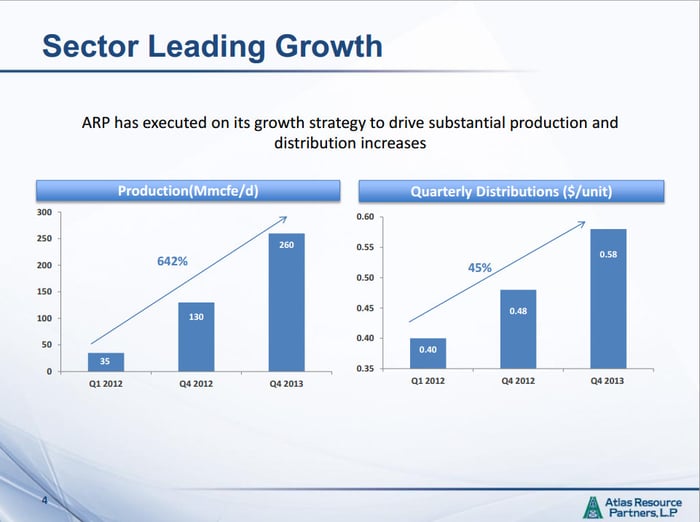 Needless to say, the company's latest oil deal, along with its acquisition of shallow decline natural gas assets earlier in the year, will keep that distribution growing.

Investor takeaway
Oil and gas MLPs are in a prime spot these days. These companies are taking advantage of the willingness of larger rivals to part with slow-growth oil and gas properties, which they are in turn using to fuel strong distribution growth. With a robust deal market for these assets remaining, there are still ample growth opportunities across the sector, which is great news for dividend-seeking investors.