Wind is invisible. But luckily, wind energy isn't. Here are five charts to help you understand the current and future state of wind energy -- and how you might profit from America's wind energy revolution.

1. Winning with wind
It may come as a shock to California, but Texas cowboys produce more wind energy than any West Coast treehuggers. The Lone Star State churned out an impressive 36 million megawatt hours (MWh) of electricity in 2013 -- more than twice that of Iowa, its closest competitor. While this might come as a surprise to most, it's yet another example of Texas doing what it does best -- finding a natural resource and making the most of it. Don't believe me? Just ask oil. 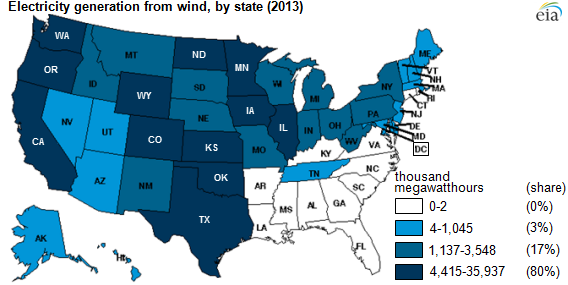 2. Wind isn't for everyone
Wind power may be never-ending, but it's not omnipresent. There's a reason Texas has more wind power than Florida -- it's got more wind than Florida. As the chart below illustrates, wind speeds vary greatly across regions. Generally speaking, only areas with speeds of 6.5 meters per second or greater are capable of harnessing wind energy, putting all green and yellow areas out of luck. But for much of the Midwest, as well as parts of the West and Northeast, more wind energy awaits. 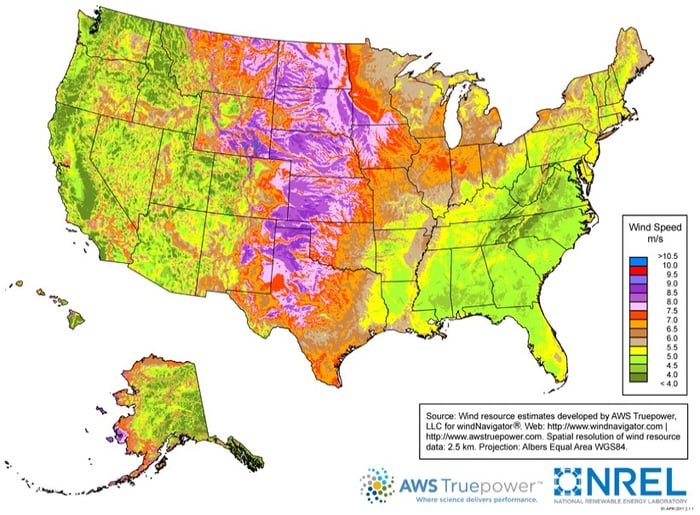 3. Offshore wind offers unprecedented opportunity
It might seem counterintuitive to put our energy production out to sea, but offshore wind supply is surprisingly close to our nation's most demanding sources. Our nation's 28 coastal states account for a whopping 70% of all electricity consumption, making offshore wind one of the most accessible electricity sources around. The map below shows average wind speeds at a 90 meter height, right where turbines are ready to roll. Any wind speed 7 meters per second or faster is harnessable, showing that nearly every state's coastline is ready for offshore wind development. 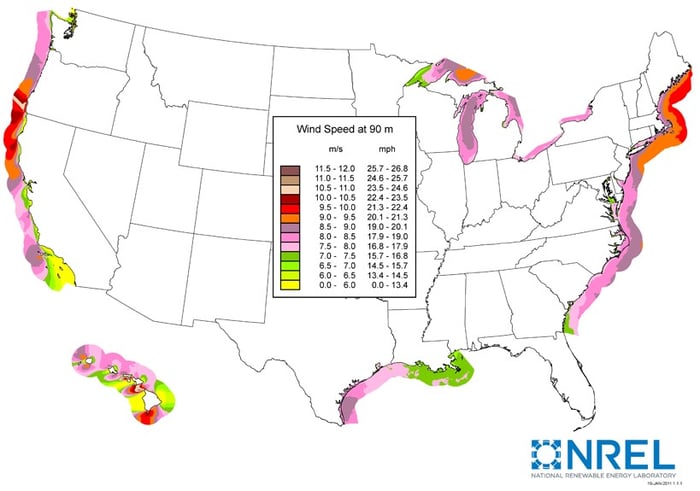 4. Wind energy expansion depends on Uncle Sam's support
Wind energy has soared in recent years, but its future is still far from certain. Production tax credits have allowed investors and energy companies to build up wind power in ways otherwise impossible -- and the same goes for the future.

New wind power generation could come to a screeching halt if the economy tanks or oil and gas gear up. But if the U.S. government keeps up its current tax benefits ("No Sunset") or sets a solid price on carbon ("GHG25"), wind power could nearly quadruple in the next three decades. 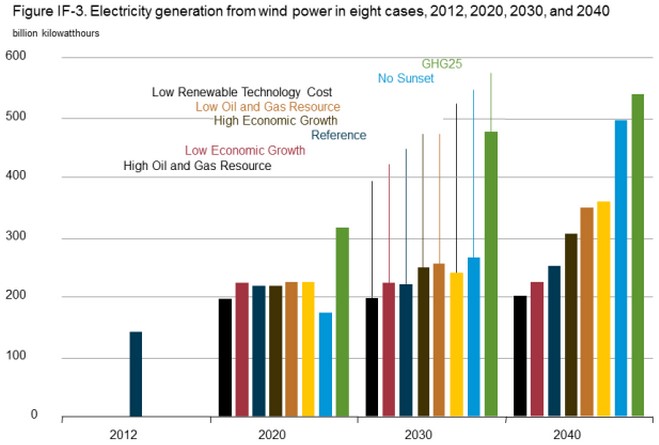 5. It's more than electricity
It takes more than wind to make wind energy. The National Resources Defense Council estimates that wind energy manufacturing, construction, and operation facilities put at least 75,000 Americans to work. A single 250 MW wind farm comprised of 100 turbines creates around 1,073 different jobs over its lifetime. The map below shows the wide spread of wind-related employers, from "T Bailey" towers in Anacortes, Washington to "5D Composite" blades in Sarasota, Florida.