The submissions are in, and the race is on!

A couple of weeks back, we acquainted you with U.S. Navy's program to design and build a new class of warship to fill the gap between today's coastal patrol vessels, and larger vessels -- destroyer-size and up. Dubbed the "Small Surface Combatant," no one's quite certain what the new vessel will look like. What is known, is that the project could mean billions and billions of dollars in revenue for the company chosen to build the ship.

The USS Chesapeake was one of the US Navy's original "six frigates." Its 21st Century variant will be a bit more advanced. Photo: Wikimedia Commons.

And now we know the names of the companies that might win the award. As confirmed last week by DefenseNews.com, the usual suspects submitted ideas for the new vessel.

Lockheed Martin (NYSE:LMT), which is offering a larger variant of its Freedom-class monohull Littoral Combat Ship, or LCS, design, scaled up to frigate size.

Australia's Austal (OTC:AUTLY), which builds the Navy's trimaran-design Independence-class LCS, plans to submit a design in which the Independence's interchangeable weapons bays will be replaced with permanently installed weapon systems.

Huntington Ingalls (NYSE:HII) is offering the military a scaled-up and armed-up variant of the National Security Cutter that it already builds for the U.S. Coast Guard.

There are also a couple of surprise entrants in this competition.

General Dynamics (NYSE:GD), which turned over shipbuilding responsibilities on the LCS to partner Austal (to focus on building the vessel's weapons systems), appears to be having second thoughts. General Dynamics is keeping mum on details of just what, precisely, it proposes to build for the Navy. However, the company was recently tapped to submit designs for a proposed new Offshore Patrol Cutter for the U.S. Coast Guard. The odds are pretty good, therefore, that whatever SSC design General Dynamics has offered the Navy looks a lot like this: 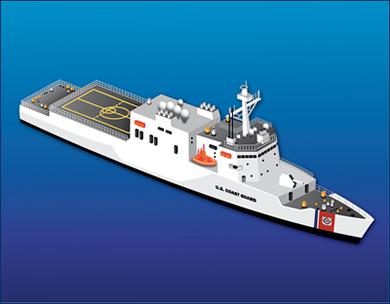 Finally (at least for now), defense contractor Raytheon (NYSE:RTN) has responded to the Navy's request for information by submitting not a ship design, per se, but a suggested complement of weapons and sensor systems for outfitting whatever vessel the Navy ultimately decides to buy. 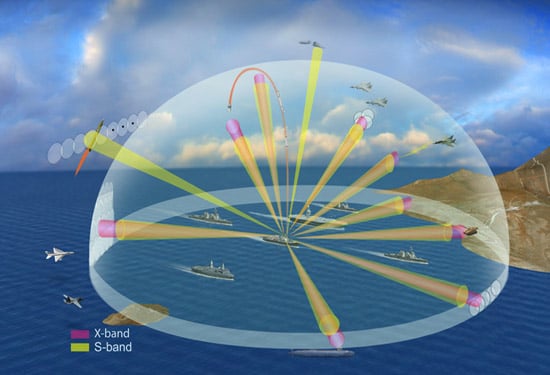 And these are only the companies that responded to the Navy's request for information. Once the Navy decides on the specs it wants built into the SSC, and invites the submission of firm bids, we could see additional interest emerge from shipbuilders in Spain, Italy, and elsewhere. In fact, I'd be shocked if Britain's BAE Systems doesn't make a bid, considering the success it's enjoyed in international sales of its budget-priced, Khareef-class corvette.

What does it mean to you?
In short, these are still early days in what promises to be a years-long process of:

If it acts true to form, the Navy may even introduce an intermediary step in this process, "shortlisting" two or three of the companies bidding on SSC to firm up their designs, sharpen their pencils, and bid against each other for the right to build the best ship at the least cost to the taxpayer. So it's going to be quite some time before any of the companies named above, or any competitors yet to enter the competition, see much money (other than a handful of millions for development work) from the SSC program.

Still, when the big money does begin flowing, it should be a significant amount.

Experts who follow the progress of the SSC project now estimate that the likely cost of the program will be $700 million-$800 million per Small Surface Combatant vessel built. That's below the "line in the sand" initially drawn by the Navy, which warned defense contractors to steer far away from a ceiling price of $1 billion per ship. It still implies, though, a project value of anywhere from $14 billion (assuming about 20 or so ships are "bought") to perhaps as much as $41.6 billion (if the Navy buys SSCs in the same numbers as for the LCSs that it originally intended to acquire).

For now, let's round it off and call the SSC a $40 billion opportunity. That estimate will probably be close enough for government work.

Who Wants to Be a $40-Billionaire, Courtesy of the U.S. Navy? @themotleyfool #stocks $LMT $GD $RTN $HII $AUTLY Next Article
Current