On Thursday, Diamond Foods (NASDAQ:DMND.DL) will release its quarterly report, and shareholders have to be pleased about the rebound that the snack-food maker has given them in recent months. After years of struggles to compete against PepsiCo (NASDAQ:PEP), Mondelez International (NASDAQ:MDLZ), and other peers in the snack industry, Diamond Foods finally appears to be putting some of its problems behind it and has watched its earnings climb nicely.

Diamond Foods has gone through tough times in recent years, as everything from accounting scandals to a failed buyout made investors abandon the snack company in droves. But steadily, Diamond Foods has worked its way through its troubles, and given its emphasis on healthier snacks than Mondelez and PepsiCo are best known for, Diamond has fit well with the prevailing trends among Americans with respect to their food habits. Let's take an early look at what's been happening with Diamond Foods over the past quarter and what we're likely to see in its report.

Can Diamond Foods earnings keep climbing?
In recent months, investors have gotten a lot more optimistic about Diamond Foods earnings, almost doubling their April-quarter estimates and raising full-year projections for this year and next by about a third. The stock has kept climbing as well, rising 8% since late February.

Diamond Foods' fiscal second-quarter results showed just how impressive a turnaround the snack-food company has made. The company managed to keep revenue flat, which was better than investors had expected, as Diamond Foods' snack segment saw sales jump almost 11% to offset a 10% drop in sales of nut products. High costs of tree nuts were largely to blame for the weakness in that segment, but the success in the segment that produces Kettle Chips, Pop Secret popcorn, and other non-nut snack foods had investors excited about the future for Diamond Foods. 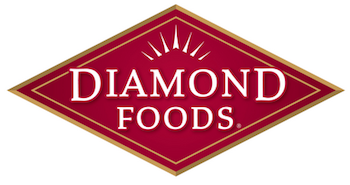 From a longer-term perspective, Diamond Foods hopes to follow those trends to bolster its overall revenue and profit growth. Producing nuts is a global industry, and as competition around the world ramps up, it becomes more difficult for Diamond Foods to keep margins high enough to produce the profits shareholders expect. By contrast, selling premium snacks is an area where Diamond Foods has been able to distinguish itself from PepsiCo, Mondelez, and other snack-makers, with the perception that Diamond's brands are worth paying higher-margin prices for.

To further that strategy, Diamond Foods intends to add to product lines for its best-known brands. New Kettle-branded ready-to-eat popcorn will feature gourmet flavors including cheddar, sea salt, maple bacon, and salt-and-pepper. Baked-potato and sweet-potato chips under the Kettle brand could also drive sales higher in the future. Moreover, with attempts to cut costs and offer more convenient portion sizes for calorie-conscious consumers, Diamond Foods hopes to boost its bottom line every way it can. That's a strategy that both PepsiCo and Mondelez have used in the past, but Diamond has a lot more to gain from its efforts.

In the Diamond Foods earnings report, watch to see whether the company is able to cut its losses on the nut front while continuing to see strength from its other snacks. Ideally, if Diamond Foods can demonstrate its ability to keep growing more quickly, then investors will be willing to put the company's storied past behind it.

Click here to add Diamond Foods to My Watchlist, which can find all of our Foolish analysis on it and all your other stocks.