What: Shares of Diamond Foods (NASDAQ:DMND.DL) gained 10% in June, following a strong earnings report at the beginning of the month. 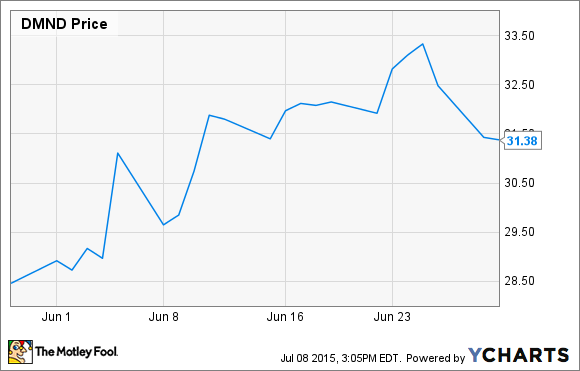 So what: The maker of nuts and snack brands such as Kettle Chips released a June 4th earnings report that led to a 7% jump in its share price as the company delivered a huge earnings beat, posting a per-share profit of $0.23 against estimates of $0.15. It was the fourth consecutive time the company had topped bottom-line estimates.

Sales actually fell in the quarter, dipping 2.5% to $186.1 million, but management was able to more than double adjusted earnings as gross margin improved nearly five percentage points to 28.5%. Management explained the decline in sales as strategic as the company exited lower-margin SKUs. The company also raised its full-year guidance slightly following the report.

Now what: For years, Diamond Foods has been a radioactive stock, following an accounting scandal that led to the resignation of its CEO and CFO, several financial restatements, and the collapse of its deal to buy Pringles from Procter & Gamble. The stock also plummeted more than 80% but has recovered since then, more than doubling from its bottom.

Its business, snacks and nuts, is unlikely to see dramatic growth anytime soon, and with a heavy debt burden, the company is unlikely to pursue any acquisitions, but management has shown that it can boost profits by rationalizing the product portfolio and making other smart decisions. On a valuation basis, a further increase in share price may be hard to justify unless the company can continue to soar past earnings estimates. Shares are already priced near 30 times this year's projected earnings. Diamond should be able to push profit margins higher, lifting earnings, but the potential in growing that way is limited. Eventually, the company will need to find a way to eventually boost sales growth in order for the stock to move significantly higher.