Investors are still having a hard time finding the diamond in the rough with Diamond Foods (NASDAQ:DMND.DL). In its recent third quarter, the company missed analyst expectations on both revenue and earnings, the latter by a substantial amount, clocking in at an adjusted $0.11 versus expectations of $0.17. Still, the company's turnaround is finally starting to take hold, so it's worth holding this diamond up to the light and seeing how much it may or may not sparkle.

Despite missing estimates, there is some good news. Diamond posted positive sales growth this quarter for the first time since the beginning of 2012. Granted, it was an unimpressive 3%, but it's consistent with the gradual improvement over the last several quarters. 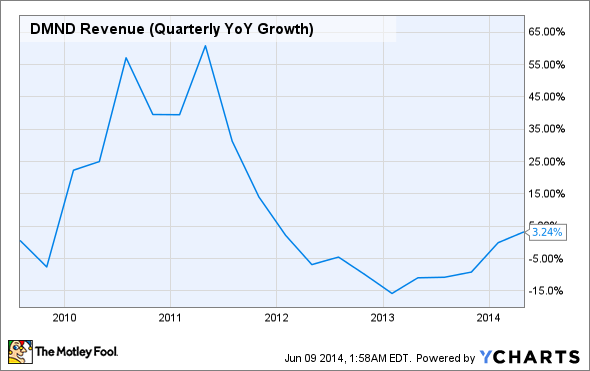 Much of the improvement can be explained by a shift away from the company's Nuts segment, which in previous years contributed the greatest part of the company's sales. Shifting away from Nuts makes a lot of sense. Even before the steep rise in nut costs, the Snacks segment contributed a far greater share of profits. Now, it carries a gross margin close to 10 times higher than the Nuts segment.

There are two main reasons for the increasing nut costs. First, during its accounting scandal a couple of years ago, certain growers announced plans to stop selling to Diamond, claiming the company was offering unreasonably low prices. It may be the case that Diamond has had to offer higher prices to growers to stay competitive.

The bigger reason, however, is that most of the company's nuts are grown in California -- Diamond Foods, after all, was once known as Diamond of California, and began as a cooperative of a group of California walnut growers. Unfortunately, California has been the victim of a vicious drought for quite a while now, driving up the cost of most of the state's agricultural products.

Diamond obviously can't control the weather, but it does have substantial market share in many of its snack products, allowing it to charge a much higher premium for things like Kettle Chips than it could for nuts. Hopefully this will be a permanent shift, despite any nostalgia for the company's origins, because focusing on high-margin snack products will not only improve overall margin in the future, it will also be more consistent.

A tough walnut to crack
While I'm cautiously optimistic about Diamond, I still can't reasonably recommend it. Because of a very large debt refinancing this quarter that even CEO Brian Driscoll described as "rather complicated", the company's actual earnings are vastly different from the adjusted earnings, which also differ greatly from adjusted EBITDA. Aside from the "rather complicated" refinancing, Diamond also has a number of other non-standard expenses, including the continuing cost of the audit committee needed for the accounting scandal, the cost of a securities class action lawsuit settlement, and the cost of a settlement with the SEC. All in all, it's hard to get a clear picture of how the company is actually doing, and millions of dollars' worth of miscellaneous legal expenses can't just be "adjusted" forever.

Despite the somewhat weak turnaround and the difficulty involved in getting a real read on the business, the stock is up 83% over the last year. Even after Friday's 11% drop, investors still seem to be setting high expectations, and that may prove dangerous.