Please ensure Javascript is enabled for purposes of website accessibility
Log In Help Join The Motley Fool
Free Article Join Over 1 Million Premium Members And Get More In-Depth Stock Guidance and Research
By Jacob Roche - Dec 13, 2013 at 9:13AM

This company's stock performance has put the cart before the horse with its business turnaround.

Diamond Foods (DMND.DL) had an interesting week last week. After reporting earnings Thursday, which included a 9.2% drop in first-quarter sales and a 25% drop in adjusted earnings per share, the stock somehow shot up 7% the next day. In fact, despite a very bad year in general, the stock is up 74%. Compare that to snack rivals and erstwhile acquisition partners Proctor & Gamble (PG 0.91%) and Kellogg (K 1.06%), who've managed only 24% and 14% stock gains over the last year, respectively. So what gives?

Hope springs eternal
There are two easy answers for Diamond's outperformance. The first is that investors see a beat-up, scandal-ridden stock and think all it needs to do is avoid more scandals and perhaps the market will take the stock back into its good graces. This was the (very mistaken) logic I used a year ago when the company was preparing to release earnings for the first time in almost a year and restate two previous years' worth of earnings. How much worse could it get, right?

As I explained at the time, it actually did get worse, and it has continued to. Business hasn't improved yet, but the stock already has, so the cart has already been put before the horse. On an enterprise value to free cash flow basis, one of the few ways to reasonably compare the company to its peers, Diamond is valued at almost a 30% premium to Proctor & Gamble and Kellogg, two companies which not only have earnings, but healthy dividends clocking in at close to 3%. 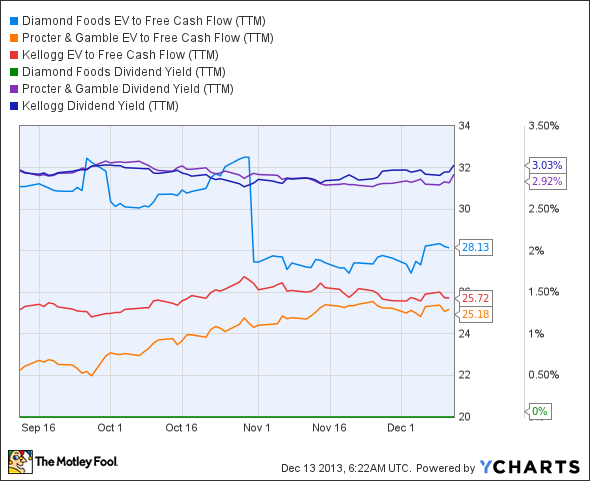 The second easy answer is that rumors continue to swirl about Diamond being a possible takeover candidate, with the most likely buyer being Kellogg. Kellogg ended up buying Proctor & Gamble's Pringles brand a few years ago after Diamond's accounting scandal scuttled its own plans to buy the brand, with Kellogg's CEO commenting at the time that Diamond's existing brands were also "clearly a fit in the portfolio."

But let's try and stay realistic
The trouble with the hope that some white knight will save Diamond investors is that the buyout premium is now already priced in, and the rumors are at least a couple of years old now -- Kellogg and other potential buyers have had plenty of opportunities since then to buy Diamond at a much better price.

Diamond is clearly overvalued right now, but it's worth wondering if it would even be worth buying at a lower price. Unfortunately, Diamond's business turnaround is not going well. Each of the last five quarters has seen year-over-year sales fall sharply. Overall, since a peak two years ago, sales have fallen 16%, while Kellogg has grown sales by nearly the same amount.

The company's Nuts segment is to blame, and there's a good and a bad reason. On one hand, Diamond has been cutting 170 Emerald Nuts products, which represent 65% of the brand's products but only 20% of its revenue. By simplifying operations, Diamond was able to increase gross margin in the segment to 15.2%, from 13.8% a year ago.

On the other hand, the company has also suffered sharply lower shipments of walnuts from its growers, a consequence of losing market share as new walnut processors enter the arena. A year ago, management pointed out that Emerald had double the market share of its nearest competitor -- this year, market share for other Diamond brands like Kettle and Pop Secret were discussed, but Emerald was curiously missing. Diamond's history of shady walnut accounting can't be doing it any favors.

The Foolish bottom line
Two factors seem to be vying for control of Diamond's fate -- turnaround initiatives to improve gross margin are helping, but not enough to outweigh lingering accounting scandal issues. Net profitability in the last few quarters has been deeply affected by a variety of nonstandard expenses, such as the cost of last year's audit committee, the cost of a securities class action lawsuit settlement, and the cost of a settlement with the SEC. However, even adjusted EBITDA, which management feels is a better indicator of the business, was down sharply this quarter.

This quarter's lower adjusted EBITDA can be explained by the lower sales figures, but it will still likely be a few more quarters before Diamond's future becomes clearer. In the meantime, the stock has already anticipated a strong turnaround, and is anything but a good buy right now.

Why Diamond Foods, Inc. Shares Are Poised to Bounce Back

Diamond Foods, Inc. Earnings: Is the Snack-Maker Back in Business?