I don't know if it's because of downscaling from more expensive casual restaurants or upscaling from fast food restaurants, but the grub is selling like hot cakes at breakfast chains Denny's (NASDAQ:DENN), Bob Evans Farms (NASDAQ:BOBE), and DineEquity's (NYSE:DIN) IHOP. Will it continue? Clues from all three say yes.

The all-you-can-eat results
On May 1, DineEquity reported fiscal first quarter results. Revenue ticked up 2.5% to $167.2 million. Adjusted net income jumped 10.1% to $24.0 million or $1.26 per diluted share. DineEquity is the company that owns the Applebee's and the IHOP chains, but it was the IHOP concept that was the star of the show. Same-store sales popped 3.9% at IHOP but slipped 0.5% at Applebee's.

Julia A. Stewart, Chairman and CEO of DineEquity, pointed out that it was the fourth quarter in a row of positive same-store sales for IHOP. It "overwhelming outperformed its category," according to Stewart. She credited DineEquity's focus on menu enhancements, advertising, and operating standards for the gains. However, in this breakfast-focused niche, IHOP is far from alone.

Denny's credits the gains on remodeling of its restaurants as it tends to drive in more traffic from curious people, and the company is noticing regulars come in even more often after the remodel. The remodels have been going on at Denny's for quite a while, though, so perhaps it is more than just the new look given that the gains are suddenly particularly strong at the same time as IHOP and Bob Evans.

Bob Evans on deck
Bob Evans hasn't been doing well. That is, at least until its last reported quarter. Back on March 3, Bob Evans had reported its fiscal third quarter results. Although same-store sales dropped 1.8%, which is in the opposite direction of DineEquity and Denny's, it's the data within those results that's most interesting.

Bob Evans has a highly concentrated number of restaurants in the Midwest that were right in the path of some of the worst storms; this caused forced store closings. To see the strength of the brand, or the ripple effect of the overall diner-chain industry, turn to Bob Evans's second largest market: Florida. 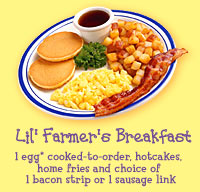 Florida obviously failed to see any winter storms. For the Bob Evans Florida region alone, same-store sales soared 4.4% for the quarter; this was even higher than the growth of IHOP and Denny's. Even within the quarter, the growth was weighted toward the backend. For Bob Evans in Florida, same-store sales growth began at 2.1% in November, went to 6% in December, and to 5.7% in January.

Foolish final thoughts
One key area that DineEquity, Denny's, and Bob Evans are looking to in hopes of expanding sales further is the lunch and dinner crowd. All three tend to be more seen as breakfast stops, so any extra traffic that they can generate later on in the day could have a significant boost. It will be interesting to see if the results from all three are a temporary fluke or the start of a longer trend.

Denny's believes that it will keep going and raised its guidance a bit. Stewart says DineEquity is building momentum at IHOP, implying even higher growth to come. Bob Evans is on deck to report next on June 17. With that report and conference call, we should get a lot more information. Stay tuned.