After employment increased by a revised 215,000 jobs in April, analysts had expected May's number to clock in at 210,000 new jobs. While initial jobless claims have been trending lower over the past few months, repeatedly hitting post-recession lows, this latest report proves that the labor market's road to recovery isn't without bumps. 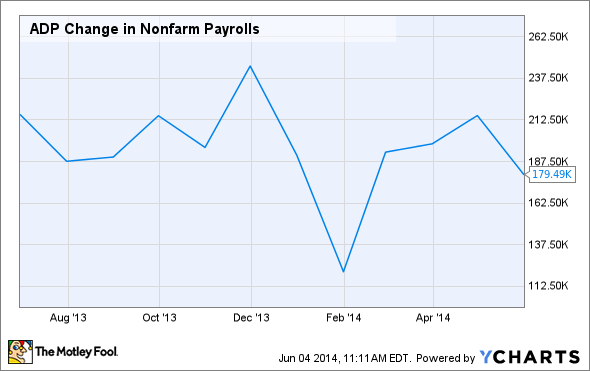 Divvying up employment by company size, small businesses (1-49 workers) were the biggest booster in May, adding 82,000 employees to their ranks. Medium (50-499) companies contributed 61,000 new positions, while large (500+) companies increased payroll size by just 37,000.

According to a statement from Moody's Analytics Chief Economist Mark Zandi, the time for a complete labor market makeover is not yet upon us:

Job growth moderated in May. The slowing in growth was concentrated in Professional/Business Services and companies with 50-999 employees. The job market has yet to break out from the pace of growth that has prevailed over the last three years.

U.S. Private Employment Edges Up an Unimpressive 179,000 Jobs for May @themotleyfool #stocks $ADP Next Article
Current