It's been a slower 2014 so far than many investors thought they'd see from Ford Motor Company (NYSE:F). Despite the company's forewarning that 2014 would be less profitable than the previous year, many onlookers didn't expect sales to stagnate and market share to dip. While analyst's expected the folks at the Blue Oval to post a small decline in May's sales, Ford managed to eke out a 3% increase last month, with retail sales surging twice that amount. It may have been a lackluster month for the company compared to Ford's competitors, but here are three important takeaways for investors.

Popular vehicles are still very popular
You wouldn't guess it after seeing the 3% overall sales gain posted by Ford in May, but sales surged for two of its three best-selling vehicles. Despite a recent recall, sales of Ford's Escape surged nearly 10% higher in May, compared to last year, and set an all-time monthly record for the highly popular crossover SUV. It was the first time that sales of the Escape topped 30,000 in one month; it was only 104 units shy of reaching 32,000 last month.

Sales of Ford's Fusion reached nearly 34,000 units in May, which was a 15% increase over last May's result. That, too, was an all-time monthly record for the flashy midsize sedan, which continues to make waves in a vehicle segment historically dominated by Japanese automakers. Ford's Fusion continues to be a hot option on the West Coast, where its sales drove a 42% increase in regional sales.

Ford's Escape and Fusion both posting all-time monthly records for the company pretty much overshadowed an excellent performance from the Explorer. Ford's Explorer, America's best-selling midsize sport utility vehicle, managed to quietly post its best sales month in nearly a decade. Sales of the Explorer jumped 21% in May compared to the same time last year, topping 20,000 units sold; the SUV now ranks as the company's fifth-best-selling vehicle this year.

Even better, Ford noted during its sales conference call that the Explorer's conquest rate -- the rate at which car buyers are trading competitor's models in for the Explorer -- was an impressive 55%. That means that, not only is the Explorer an attractive option for first-time buyers, or car buyers moving up from passenger cars, but those who own SUVs are opting to switch over to Ford's products more often than in the past.

By the way...
Another random surprise from Ford's May sales report was that the MKC has all of a sudden been selling. This was the first month that the Lincoln MKC has recorded any sales, and investors can expect sales to begin climbing much higher in the months to come. Last month, the MKC posted sales of 677 units, but look for that to rival sales of the MKZ -- typically ranging from 2,500 to 3,500 units per month -- when ample supply of the highly anticipated luxury crossover SUV hits dealerships throughout the summer.

Sales of Ford's Lincoln luxury brand have surged 21% through the first five months of 2014. With the incremental sales that the MKC will rope in going forward, investors can expect impressive year-over-year sales gains -- soon, overall brand sales will likely be able to top 10,000 units in one month for the first time in more than five years.

While that's obviously not a highlight for the folks at the Blue Oval, especially as those full-size pickups represent big chunks of the company's profits, it's not as big of a concern as you might think. Last month, sales of the F-Series were up compared to May of last year, and sales are still trending strongly in the right direction. 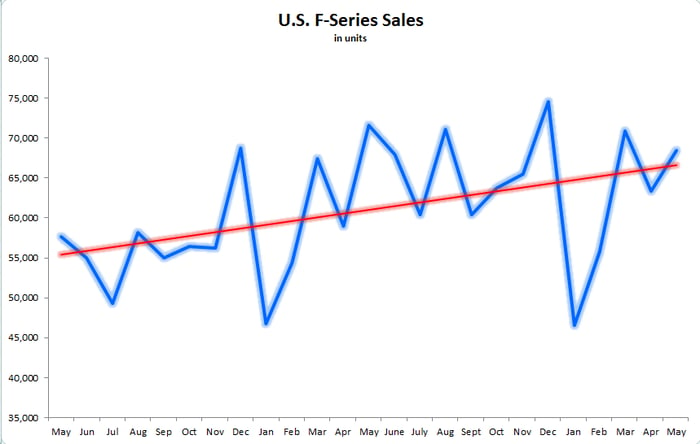 Furthermore, in terms of overall volume rather than year-over-year gains, the F-Series still outsells both the Silverado and the Ram by large margins. Sales of Ford's F-Series topped 305,000 through the first five months of 2014, while the Silverado and Ram checked in with sales of roughly 197,000 and 171,000 units, respectively.

We also have to consider Ford's strategy right now, which isn't to gain market share with the oldest full-size truck design in the industry. Ford simply wants each remaining sale to be as profitable as possible, while the company anticipates that its all-new 2015 F-150 will reclaim any lost market share fairly quickly.

It's a strategy that's working. The F-Series currently has the highest average transaction prices and lowest incentives compared to General Motor's and Fiat Chrysler Automobile's competing trucks -- an impressive feat for an outgoing model.

Bottom line
Sure, investors might be slightly disappointed in the slower sales gains recorded by Ford; but we have to keep in mind that this is a transition year for the automaker. Ford is in the middle of its most aggressive launch schedule in company history; it will roll out 23 new vehicles globally, with 16 specifically here in North America. With Ford's new designs, such as the Fusion and Escape, selling well, investors should be optimistic that Ford will produce impressive sales gains in the years ahead.