Several years ago, Amazon.com.com's (NASDAQ:AMZN) AWS possessed what looked like an insurmountable lead in cloud IaaS, or infrastructure as a service. However, a report released by Gartner a few days ago shows that Microsoft (NASDAQ:MSFT) is finally managing to provide a credible challenge to AWS.

AWS still controls about 87% of this market but Microsoft is catching up fast. The below ''Magic Quadrant'' from Gartner shows AWS' leading position in cloud IaaS. 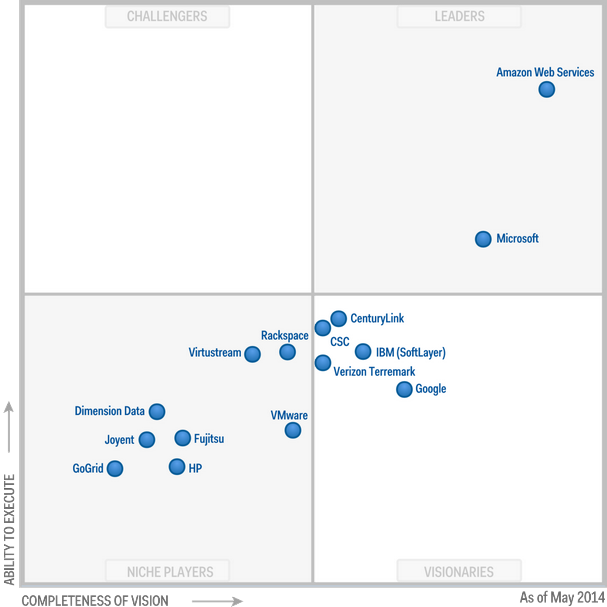 Only Microsoft was ranked in the ''market leaders'' quadrant with AWS.The Gartner report noted that the other vendors are still far behind AWS and Microsoft Azure.

AWS enjoys a first-mover advantage since its cloud has been running for years. As a result, it enjoys a much larger partner ecosystem of software-as-a-service, or SaaS, applications and optimization services that are built to run seamlessly on the AWS cloud. Azure, however, is newer, and the report says that it still sports some feature gaps in security functionality and networking. Its partner network is also still growing.

The Gartner report reinforced an earlier report by the Synergy Research Group that showed that Microsoft is now a clear No. 2 in the combined cloud markets of IaaS, platform as a service, private and hybrid clouds. 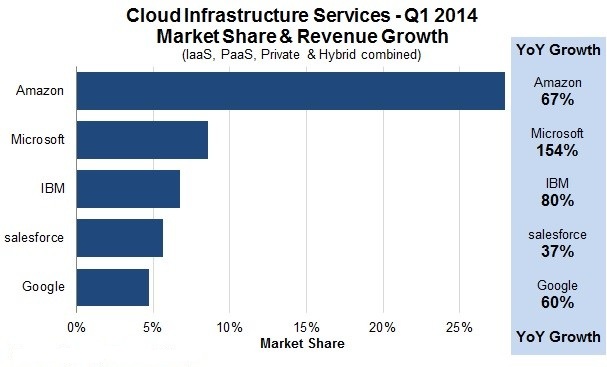 Why the IaaS cloud is important
Gartner provided estimates that showed that the cloud computing market was worth about $131 billion by the end of 2013. Cloud advertising dominates this market with a 48% market share, followed by cloud business process services, or BPaaS, with 28% market share. SaaS has a 14.7% share, IaaS commands a 5.5% share. Cloud management and security services has 2.8%, and PaaS has just 1%.

IaaS and PaaS are the most commonly referenced cloud segments when talking about the public cloud. The IaaS market is about 5.5 times bigger than the PaaS market. There are growing concerns that the PaaS market could be consolidating, with IaaS and SaaS vendors already providing PaaS-like offerings.

For instance Salesforce, the leading SaaS vendor, offers customers the Force.com platform to help them build their customer applications.  CenturyLink,an IaaS provider, has adopted PaaS technologies that enable its customers to build their apps and host them in their IaaS clouds.

Although it's still too early to tell, this might mean that the future of the cloud is IaaS and SaaS. Microsoft Azure started off as a PaaS offering. Google's cloud also began as a PaaS offering in the form of Google Application Engine, or GAE.

But it appears as if Microsoft is now concentrating more on building out its IaaS cloud, which seems like the right direction to take.The fact that Microsoft is second in the important IaaS market is a true testimony that its IaaS strategy is finally working.

Microsoft's has a highly flexible vision of infrastructure and services that not only allows customers the ability to offer stand-alone offerings, but also extends and interacts seamlessly with Microsoft infrastructure, as well as on-site applications driven by Hyper-V, Active Directory and Systems Center, and Windows Server.

About a year ago, James Staten, a Forrester Research analyst, said that Microsoft Azure had the potential to double its growth each year for the next couple of years. He also noted that Azure probably had more net growth ahead of it than all its competitors.

Foolish bottom line
Microsoft's cloud could provide a huge boost to its revenue growth in the near future. In just three years or so, growth in the company's cloud revenue could outstrip its overall growth by all its other segments combined.