Investors generally thought the asset trade made by LINN Energy (OTC:LINEQ) and LinnCo (NASDAQ: LNCO) with ExxonMobil (NYSE:XOM) was an adequate deal No one really thought LINN Energy got the better end of the exchange, as ExxonMobil clearly was the company picking up future upside. That being said, the deal orchestrated by LINN Energy and LinnCo makes a lot of sense when factoring in one often overlooked asset: the Jayhawk Gas Plant in Kansas.

An underutilized asset
LINN Energy in 2012 spent $1.2 billion for 2,400 shallow-decline, liquids-rich natural-gas wells in the Hugoton Basin, along with a few hundred future drilling locations, as the following slide shows. 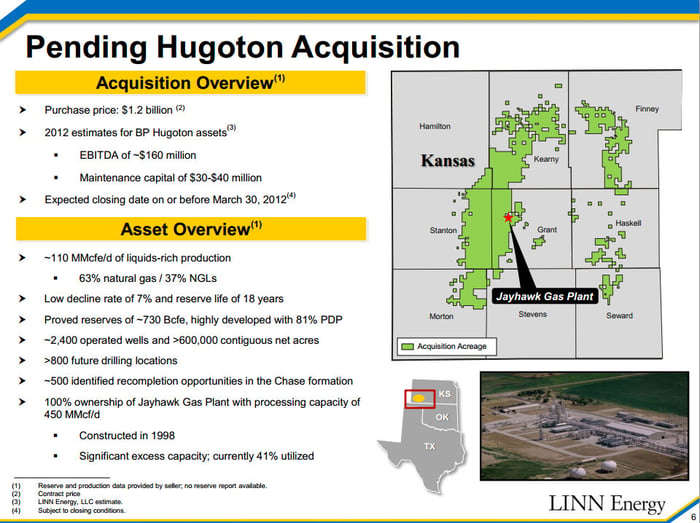 In addition to the gas assets, LINN Energy picked up the Jayhawk Gas Plant, which had the capacity to process 450 million cubic feet per day, or MMcf/d, of natural gas. At the time that plant was just 41% utilized, leaving it with significant excess capacity.

LINN Energy has slowly improved throughput volumes of the plant over the past two years. By the end of last quarter, LINN Energy had increased volumes by 6% to a total of 197 MMcf/d. But the plant is still only about 44% utilized.

Synergies await
More than half of that utilization comes from LINN Energy's current production in the Hugoton Basin, which is about 112 MMcfe/d. The addition of ExxonMobil's Hugoton Basin assets adds another 85 MMcfe/d of liquids-rich natural gas, as the following slide shows. 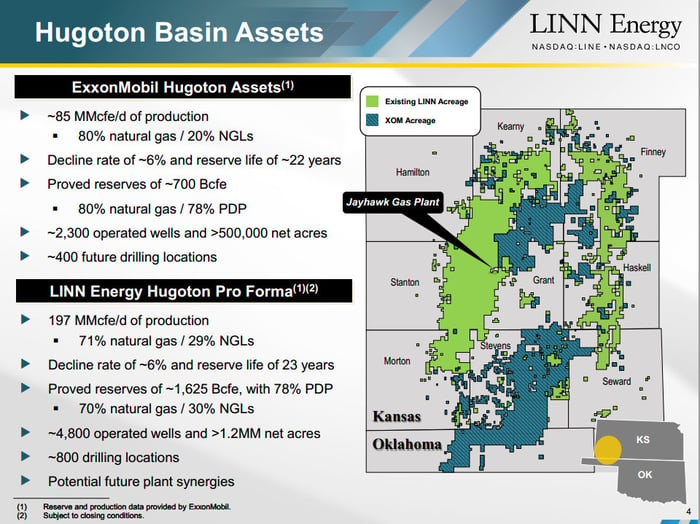 The production acquired from ExxonMobil, as well as the future drilling locations, could yield future synergies as this gas can be processed at the Jayhawk plant. Increasing the capacity of that plant that could yield incremental distributable cash flow over the long term.

In addition, by increasing the throughput capacity of the Jayhawk Gas Plant, LINN Energy is also increasing the value of that plant. Not only does it become more valuable to the company, but it would also increase the value of this asset to third parties. It's possible that once these synergies are achieved and the plant is running closer to full capacity LINN Energy could then monetize that plant by selling it to a midstream-focused MLP. It's this upside that most investors are overlooking.

Investor takeaway
LINN Energy and LinnCo's trade of a portion of their position in the Midland Basin for ExxonMobil gas assets in Kansas might not have been the deal investors hoped to see. However, the deal does have an important strategic rationale that is being overlooked. This trade might turn out to be better than investors expect.