The Dow Jones Industrial Average (DJINDICES:^DJI) was just under breakeven in late trading in part because of higher oil prices.

Crude oil prices spiked over $105 per barrel today after the U.S. Energy Information Administration predicted that the average price of West Texas Intermediate and Brent crude oil in 2014 would be $98.67 and $107.82, respectively. The gasoline price estimate was raised $0.02 to $3.50 per gallon, meaning consumers will spend more on energy than previously expected. Dow energy components ExxonMobil (NYSE:XOM) and Chevron (NYSE:CVX) have had a mixed reaction to the news, respectively falling 0.14% and climbing 0.6%.

Higher oil prices may be a positive for a portion of these oil giant's businesses, but it's the downstream that will be hurt by the EIA's new forecast.

Why Big Oil doesn't like high oil prices
Both Exxon and Chevron generate a majority of their earnings from upstream, or oil and gas drilling, so they'll see a benefit -- but both have been cutting back on drilling expansion. ExxonMobil said in March its capital spending would drop 6.4% this year to about $39.8 billion. Chevron has knocked down its 2014 capital budget by about $2 billion, to $39.8 billion.

The reason for cutting back on exploration is simple enough: Major oil fields are getting harder to find and more expensive to exploit, so a cutback in spending reduces risk of failure for a major field. But it also reduces upside when crude oil prices rise.

But there's another impact on earnings that often goes overlooked. Higher crude oil prices lead to lower refining margins unless gasoline prices rise, and that hasn't been happening recently. You can see below that as crude-oil prices have spiked gasoline hasn't nearly kept pace, leaving both companies' downstream businesses hurting. 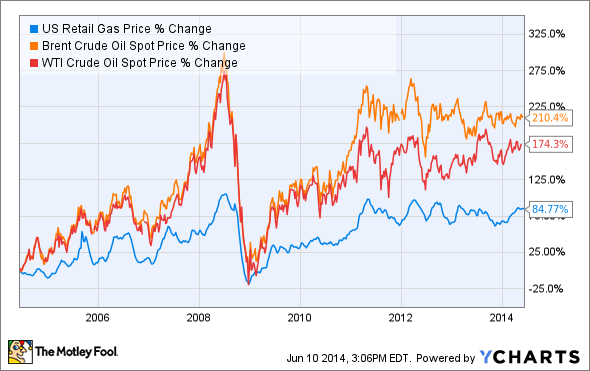 Big Oil is stuck between a rock and a hard place because core costs to extract oil are rising in the major fields that they normally dominate and shale plays that require nimble operators are being exploited by smaller companies.

Further down the value chain, gasoline consumption is down domestically and in Europe as efficiency improves and alternatives become more viable. 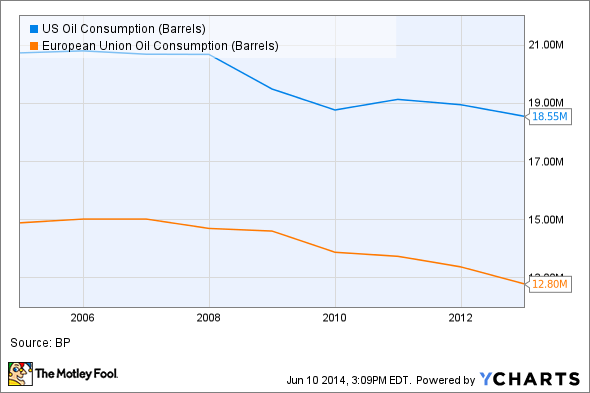 A small rise in the cost of gasoline doesn't change that narrative, and that's a huge risk to Big Oil in the long term. The oil business is still highly profitable but it's also fading slowly as traditional oil-consuming nations find alternatives. ExxonMobil and Chevron are bellwethers for the energy industry as a whole and they're struggling to grow in the current environment.