Microsoft's (NASDAQ:MSFT) exclusive Electronic Arts (NASDAQ:EA) shooter, Titanfall, might not be exclusive to its console and PC platforms for much longer. Titanfall's sequel, currently "in the planning stages," could launch on both Microsoft's Xbox One and Sony's (NYSE:SNE) PlayStation 4, according to a recent pre-E3 report from The Wall Street Journal.

EA launched the first game, which was developed by Respawn Entertainment and Bluepoint Games, exclusively for the Xbox 360, Xbox One, and PCs in March. In May, EA confirmed that it had signed a new deal with Respawn to provide new Titanfall "experiences," although it did not clarify whether the games would be exclusive to Microsoft.

Titanfall 2 was notably not among the new titles that EA mentioned at its E3 press conference on June 9, which included Star Wars Battlefront, Dragon Age: Inquisition, Mirror's Edge 2, Battlefield Hardline, FIFA 15, and The Sims 4.

But does the sequel to Titanfall really matter as much to Microsoft and Sony as some gamers and investors believe? Let's take a closer look at three key factors that indicate that all that buzz could simply just be a lot of noise.

Titanfall is not Halo
Microsoft clearly wanted Titanfall to be the successor to Halo, the hit sci-fi shooter franchise that sold 57 million copies over the course of eight games (six main games, an RTS spin-off, and a remake of the first title) on Microsoft-exclusive platforms.

Titanfall doesn't come close to matching Halo's sales. Titanfall has sold 2.9 million copies so far across three platforms -- the Xbox 360, the Xbox One, and the PC. Those sales figures are solid, but only 1.8 million of those copies were sold on the Xbox One.

By comparison, Halo: Combat Evolved, the first Halo game, sold a whopping 6.4 million copies on a single platform -- the original Xbox -- in 2001. The game was so loved that an Xbox 360 remake, Halo: Combat Evolved Anniversary, went on to sell 2.2 million more copies. Halo 3, the best-selling game in the franchise, sold a whopping 11.9 million copies on the Xbox 360.

Simply put, sales of Titanfall across three platforms have failed to measure up to even one Halo game released on a single platform.

In the past, console makers would sign major contracts with popular publishers to secure exclusive games for their platforms. Terms of the deal would generally cover the projected sales that the publisher would have generated from releasing the games on other consoles. For example, Sony signed a deal with Take-Two (NASDAQ:TTWO) to make Grand Theft Auto III and its two sequels limited-time PS2 exclusives before they were launched on the Xbox and Windows.

However, game publishers soon realized that their franchises were becoming more popular than the consoles themselves. Since consoles from Sony, Microsoft, and Nintendo had become technically similar, console makers needed platform exclusive titles from publishers far more than the publishers needed them.

That's the main reason we rarely see restrictive agreements like Sony/Take-Two's Grand Theft Auto deal anymore. EA's first Mass Effect, for example, was originally an Xbox 360 and Windows exclusive, but the sequel was launched on the PlayStation 3 as well. The reason is basic arithmetic -- the first Mass Effect sold 3.5 million copies on two platforms, but Mass Effect 2 sold 4.7 million copies across three. 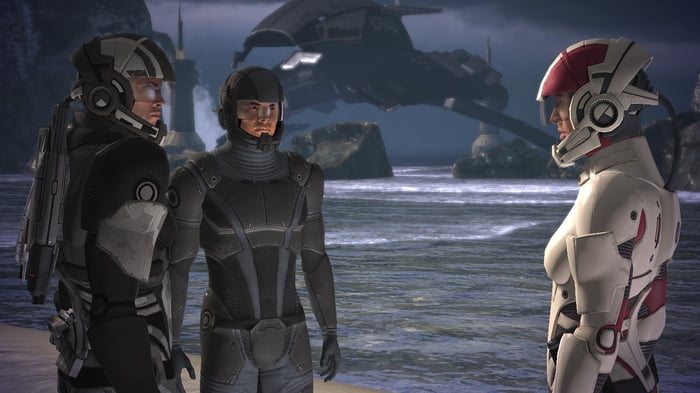 In other words, publishers might test the waters with an exclusive deal, but if the game is a hit, they will immediately expand the franchise to other platforms to maximize sales.

Activision Blizzard will release Destiny and Call of Duty: Advanced Warfare later this year. EA will release Battlefield Hardline in October. Microsoft just announced that Halo 5 will arrive as an Xbox exclusive in 2015. If sales of Titanfall and its upcoming DLCs can weather that storm of bullets and plasma grenades, the IP might still hold some value for Sony and Microsoft.

But I doubt that Titanfall can hold the line against those rivals. Recent weekly sales figures from Vgchartz (ending on May 31) show that the Xbox One version of Titanfall has fallen to #14 in global sales with 35,050 units sold. In the same week, Ubisoft's Watch Dogs sold 3.75 million copies across five platforms, while Nintendo's Mario Kart 8 has sold 1.12 million copies on the Wii U.

The Foolish takeaway
Titanfall is a good game, but it's not the next Halo and it certainly won't be a "killer app" in the eighth generation console war between Sony, Microsoft, and Nintendo.

Titanfall's biggest flaw is that it simply didn't live up to the hype. Microsoft, in an attempt to fill a void in sci-fi shooters before Halo 5, fueled that hype with aggressive bundling strategies and price cuts. In conclusion, it won't be surprising if Titanfall 2 arrives on the PS4, but the decision honestly won't matter very much to the companies, investors, or gamers involved.

'Titanfall 2' to the PS4? Why Exclusive Titles Are Becoming a Thing of the Past @themotleyfool #stocks $EA $MSFT $SNE $TTWO $ATVI Next Article
Current